Nick's Blog » Some Progress, Not Enough

After having such a rough night on Wednesday night, when I couldn’t sleep, Thursday night was much better for both of us. We both woke up feeling refreshed, and my back pain was greatly diminished.

I spent most of yesterday trying to figure out the problem with Dragon NaturallySpeaking and why it suddenly stopped working on my computer. I made some progress in resolving the issues, but not enough. I got a lot of input from some folks on Facebook who know a lot more about these kinds of things than I do. As it turns out, Windows did an update on the night of the 11th, and the problem began on the 12th. Apparently, there was some kind of a conflict in the update.

I was finally able to get Dragon to work with a microphone again, but not the digital recorder. However, I was able to copy the chapter and a half I had recorded for my new Big Lake book before the problem began onto my computer. Then I put the microphone in front of the external speakers on my computer and played the file from the recorder over the computer. It wasn’t great, but it picked up enough that I was able to go in and clean it up and be able to use it. So I didn’t lose all the work I was afraid I had.

That took a good part of my day, along with a couple of calls to Nuance customer support, the company that makes Dragon. They tell me that for $300, I can get the new Professional version, which the guy is pretty sure will work with my digital recorder. Pretty sure. I’m not sure I want to gamble $300 on pretty sure unless it’s a filly at a horse race. I guess I’ll just stick with what I’m doing for now.

Several people have told me that I should just buy a Mac computer and quit worrying about it. No thanks. Been there, done that. Never again! Besides which, Dragon doesn’t work on Macs either, unless you load a Windows version of software onto them. If I’m going to do that, why switch?

Aside from computer woes, there isn’t much new to report. Sometime around 5:30 in the afternoon I heard a loud rumbling and felt a vibration, and realized that I had completely forgotten that there was a rocket launch from Cape Canaveral scheduled. We don’t usually hear the launches themselves, as much as we hear the reentry of the rocket boosters. I went outside and got a couple of good pictures of the rocket’s trail through the sky. 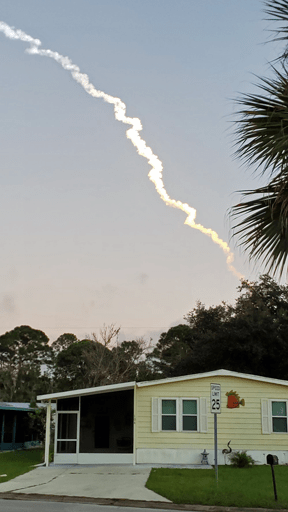 They were supposed to launch another one today, with four astronauts headed to the International Space Station, but it’s been pushed back to Sunday, weather permitting. I will try to remember to get out and take some pictures of it.

Dinner was one of Miss Terry’s delicious chicken pot pies, all made from scratch, and yes, I stuffed myself, and I make no apologies for it. That lady is absolutely the best cook that was ever born.

Several people have invited us to Thanksgiving dinner at different places here in Florida, but we have declined. Until this whole COVID thing is under control, if it ever is, we don’t plan to be around groups of people. Not even our kids. Terry has a turkey breast in the freezer that she will make and we will have a nice quiet dinner at home, just the two of us. I’m looking forward to it. 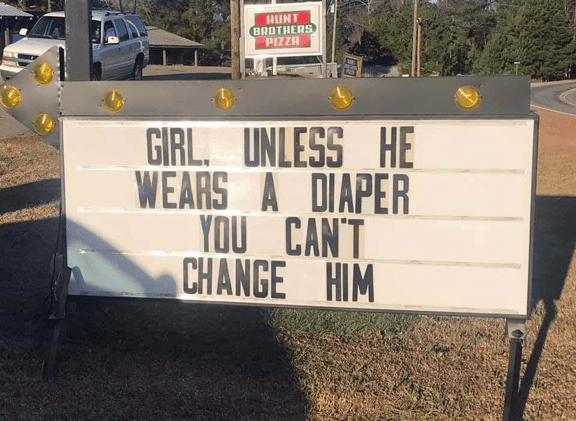 Thought For The Day – Does anyone know if we can take a shower yet, or should we just keep washing our hands?

One Response to “Some Progress, Not Enough”