Nick's Blog » It Was A Better Day

Yesterday was a much better day than the day before. A little before noon, a nice young man named Jake from Lindley’s Garden Center arrived to plant our three new citrus trees.

After helping us determine where we wanted them in the yard, Jake dug three holes. 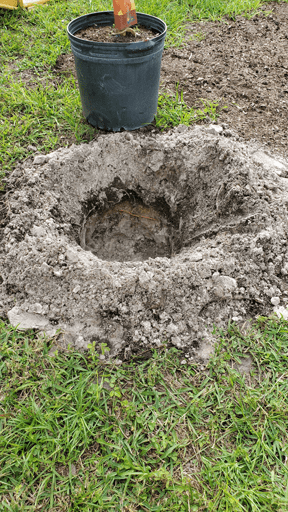 Then he planted each tree carefully, building a mound of dirt around them to hold in water. 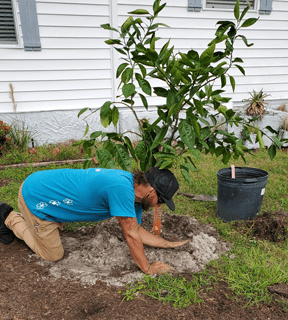 Jake is a very knowledgeable young man, and we picked his brain and learned quite a bit about the best way to nurture the trees until they get going. I also had him look at the perennial peanut plants we had bought from the nursery and put in several weeks ago. Jake said the perennial peanut is a very strong plant that doesn’t require much attention once it gets established and said they look like they’re fine and coming along very well. Even the ones that our yard guy attacked with the weed eater a few days after they were planted have rebounded nicely.

So we now have a key lime tree, a tangelo tree, and a lemon tree. 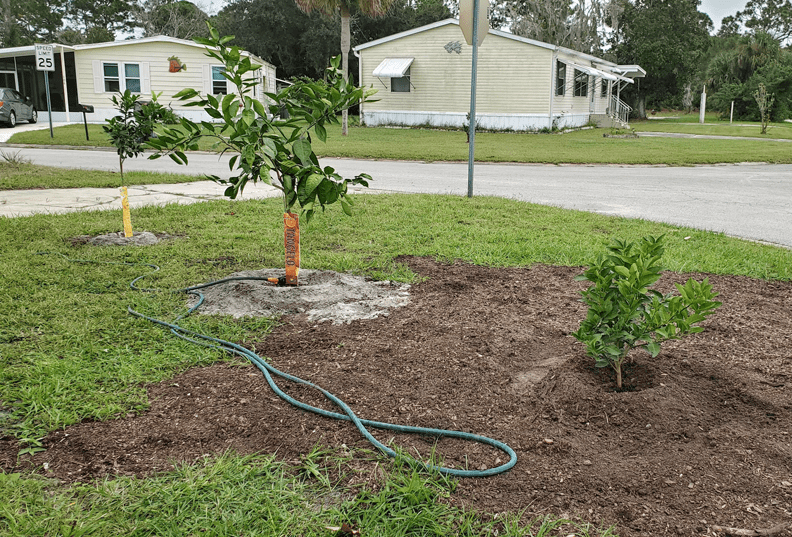 According to the folks at the nursery, the first time they get buds of fruit, which should be in two to three months, we should nip them off because the branches won’t be strong enough to support their weight. But Jake said within 18 months we should expect to be able to pick fully matured fruit from the trees. We’re looking forward to that.

After Jake left, I got to work on my computer. The chapters I had narrated the day before and then lost were fresh enough in my mind that I was able to re-create them quite easily. So that was a setback that I was able to overcome.

Someone asked me why I wasn’t using my digital recorder like I always did before. Normally I dictate into a Sony digital recorder and then upload that to Dragon to convert it into text. Unfortunately, a recent update to Windows 10 made Dragon NaturallySpeaking, which I was using, obsolete. So I ordered Dragon Professional 15 and am using it. However, the Sony digital recorder that I have used all along is not compatible with it.

I ordered a new Zoom H4n Pro recorder, which will be here Monday, as well as a Blue Yeti Nano microphone, which should arrive on Tuesday. But in the meantime, I have been going old school keyboard with my very slow two finger typing style.

After this crash that cost me the work, I actually did figure out a way to make my old Sony digital recorder work with the new version Dragon. It’s a different process, in that I have to load the MP3 files from the recorder onto my computer and then import them into Dragon, instead of going directly from the recorder to Dragon like I have been doing. It involves an extra step in the process, but it will work and is how I narrated this blog post.

As for the snake, he’s still around. When I saw him on Friday, causing me to almost soil my undies, he crawled through one of the vent holes in our big air conditioner in our carport. Which means to me, he could probably get inside the house from there. Terry tells me I’m being overdramatic, but think about it. Would you rather be outside eating bugs and frogs or inside here eating the wonderful things she cooks? Yeah, I thought so.

Yesterday afternoon when I went out to get the mail I saw him poking his ugly snake head out from one of the vent holes in the AC, but he quickly pulled it back in when he saw me. No, I’m not going to kill him. Yet. As long as he stays outside and away from me, I will try to coexist peacefully. But if he shows up inside the house. I will treat him like any other intruder.

Today is your last chance to enter our Free Drawing for an audiobook of Free Ride, the thirteenth book in my pal Ben Rehder’s popular Blanco County mystery series. To enter, click on this Free Drawing link or the tab at the top of this page and enter your name (first and last) in the comments section at the bottom of that page (not this one). Only one entry per person per drawing please, and you must enter with your real name. To prevent spam or multiple entries, the names of cartoon or movie characters are not allowed. The winner will be drawn this evening. 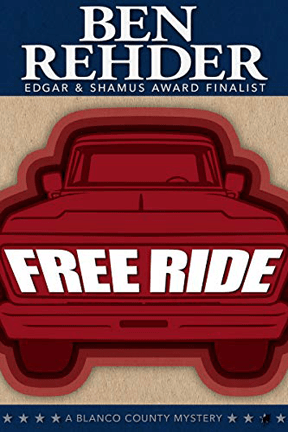 Thought For The Day – Some days, you’re the pigeon, some days you’re the statue. Just live with it.

5 Responses to “It Was A Better Day”