Note: This story first appeared in the September-October 2012 issue of the Gypsy Journal.

Is there a kid anywhere who doesn’t know The Cat in the Hat, Yertle the Turtle, the Grinch, Horton the Elephant, or the Lorax?

They all sprang from the mind of Theodor Seuss Geisel, the author, poet, and cartoonist known and loved around the world as Dr. Seuss.

Born in Springfield, Massachusetts in 1904, Geisel had a happy childhood, and the city of Springfield provided inspiration for many of his stories. And To Think That I Saw It On Mulberry Street, his first children’s book, is filled with Springfield references, right down to policemen riding red motorcycles, the traditional color of Springfield’s famed Indian Motorcycles.

He attended attend Dartmouth College, where he became editor of the Jack-O-Lantern, Dartmouth’s humor magazine. After graduating from Dartmouth he went to Oxford University in England but soon grew bored with academics and left to explore Europe.

After returning to the United States, Geisel worked as a freelance cartoonist for the Saturday Evening Post, Life, Vanity Fair, and other publications, and spent fifteen years in the advertising department of Standard Oil. A contract to illustrate a children’s book for Viking Press gave him his break into children’s literature, but it wasn’t easy to get established. His first book was rejected 27 times before being published.

By the time he died in 1991, Geisel had written and illustrated 44 children’s books, including such perennial favorites as The Cat in the Hat, Green Eggs and Ham, Horton Hears a Who!, and How the Grinch Stole Christmas. His books have been translated into more than fifteen languages and have sold over 200 million copies worldwide.

Sculptor Lark Grey Dimond-Cates, who happens to be Theodor Geisel’s stepdaughter, created a series of wonderful bronze sculptures of Doctor Seuss and his most beloved characters for the garden, including Dr. Seuss and the Cat in the Hat, which features Geisel at his drawing board with the Cat in the Hat at his side. 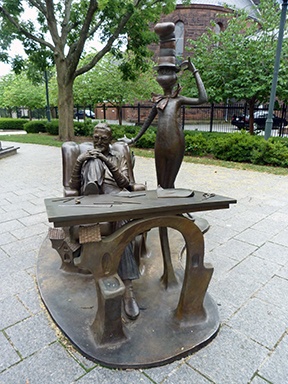 Nearby is The Storyteller, a storytelling chair in front of a ten foot tall book with the text of Oh, the Places You’ll Go! Gertrude McFuzz sits atop the book and the Grinch and his dog, Max, peek around the side. 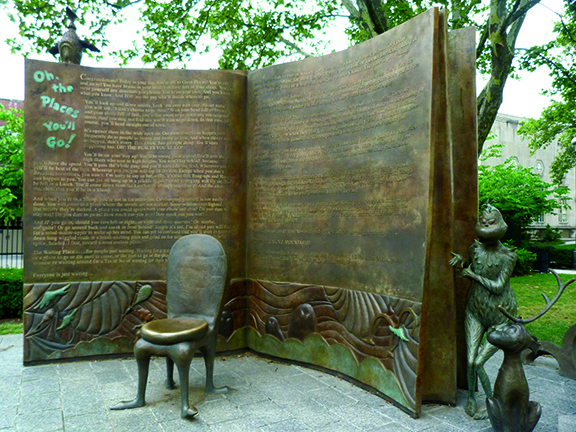 In Horton Court, a fourteen foot Horton the Elephant, Sam-I-Am, Thidwick the Big-Hearted Moose, and other characters greet visitors. 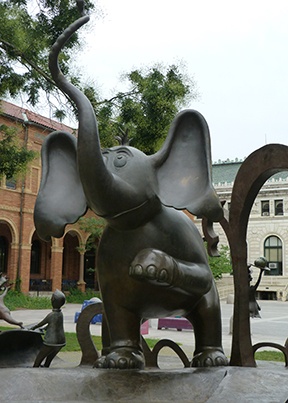 An amazingly simple and yet complex Stickwork sculpture called Room by Room, which was created by a local artist weaving together saplings trimmed from trees by the museum staff, sits at the rear of the sculpture garden. It is a combination maze and work of art that kids love exploring. 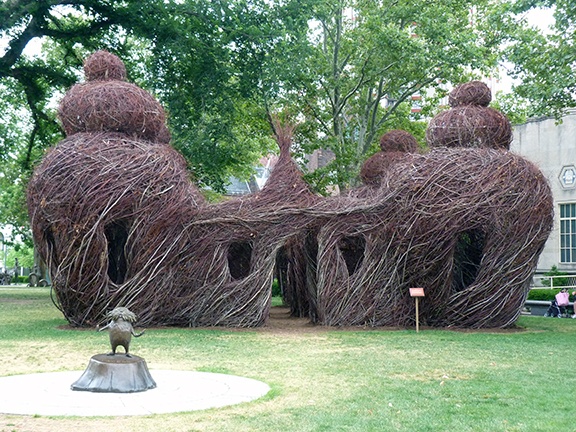 I think that while it might be possible to arrive at the sculpture garden in a bad mood, it would be impossible not to leave with a smile after spending some time with Doctor Seuss and his lovable, whimsical characters. They speak to the child inside all of us.

There is no charge to visit the Dr. Seuss National Memorial Sculpture Garden, which is located at 21 Edwards Street in downtown Springfield and is open daily from 9 AM to 5 PM. Visitors can park for free in the Springfield Museums’ lot on Edwards Street, and additional public parking is available nearby. The streets in downtown Springfield are very congested and not suitable for a large RV, so park at a campground outside of the city and drive your tow vehicle when you visit.

Thought For The Day – Always laugh when you can. It’s the cheapest medicine.