Note: This is a follow-up post to yesterday’s blog about our first trip to Savannah, in 2011.

Yesterday we did a whirlwind tour of Savannah, and though it would take weeks to really do justice to this charming and beautiful city, we saw enough to know that coming back here and spending some time is very high on our Must Do list.

But I would advise anybody planning to tour Savannah to first spend a few weeks working out at a gymnasium, with lots of stretching and flexing exercises, because one could easily dislocate their neck turning it in so many directions at once, to be sure they don’t miss yet another handsome row house, tree-lined park, statue, or historic home.

We started our day at the city’s Visitors Center, not to be confused with two other nearby “visitor centers” which are actually run by tour companies. The Visitors Center is located on the site of a Revolutionary War battlefield, where in 1779, patriots tried in vain to dislodge the heavily entrenched British Redcoats and their Hessian mercenaries and Cherokee Indian allies.

Savannah is a great walking city, and a very nice gentleman at the Visitors Center gave us a free walking tour map and a lot of advice on places to see. Then we set off down streets shaded by overhanging live oaks, stopping to admire the frequent “squares,” which are islands of greenery, most of which had statues or monuments dedicated to famous patriots and city founders. 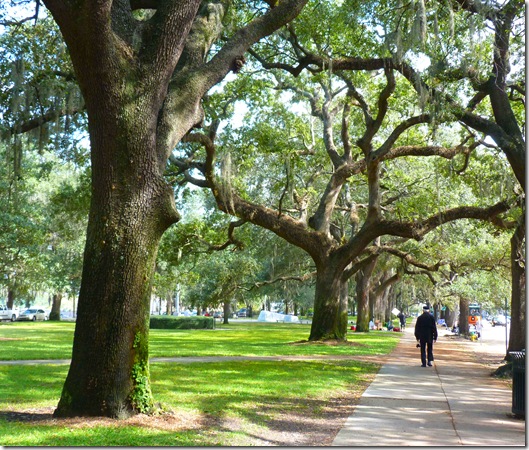 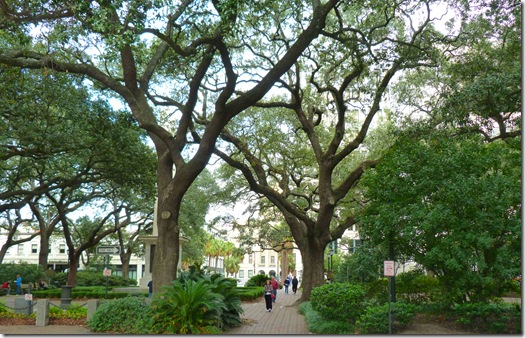 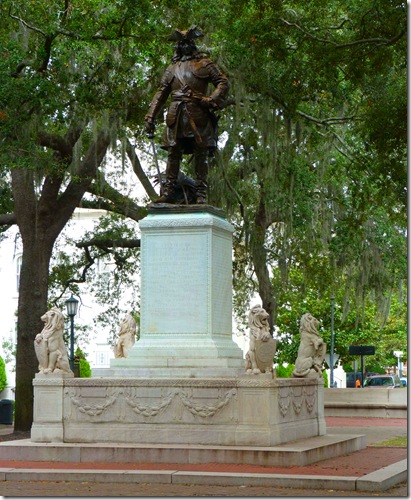 There are historic homes and buildings on every block. Juliette Low, who founded the Girl Scouts in America, was born in this house on Halloween in 1860. I wonder if her ghost came back this Halloween and was looking down on us? 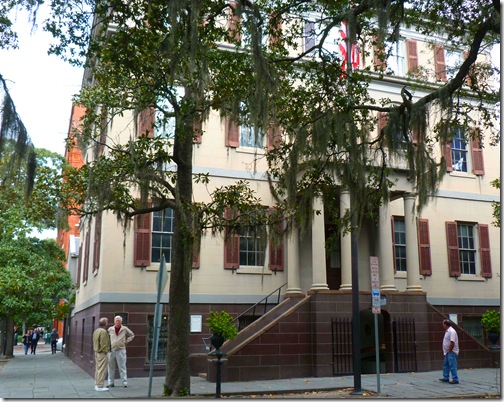 At the gold-domed City Hall, we took an outside elevator down to the waterfront, with its cobblestone streets and collection of shops and restaurants occupying buildings that once held cotton warehouses, ship’s supply stores, and unfortunately, slave auctions. 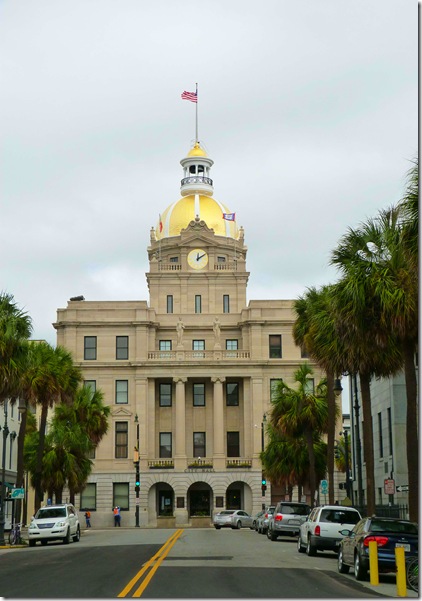 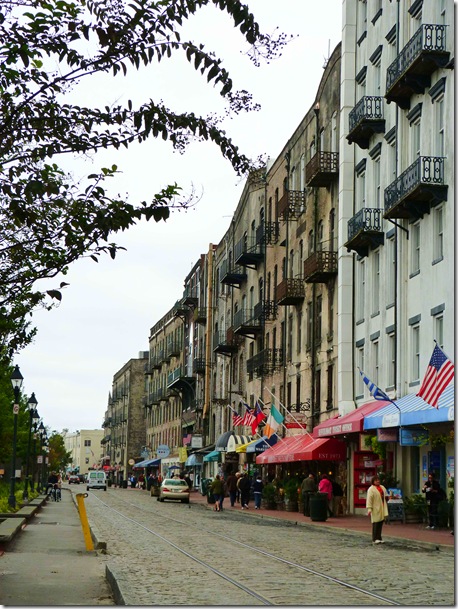 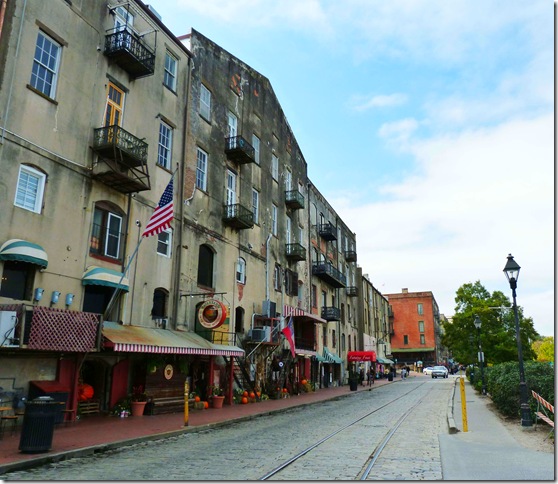 We loved this part of the city and could have spent hours here. As it was, we did spend a good part of our day on the waterfront! I love these old buildings! 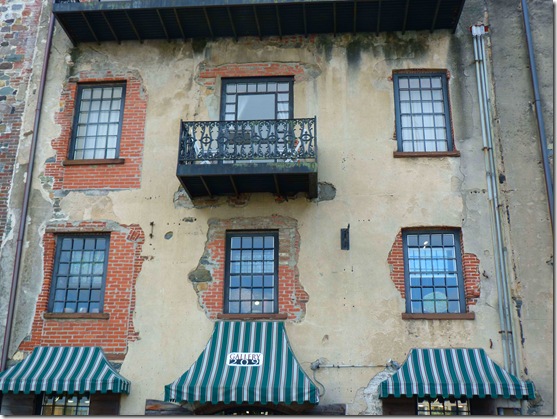 In yesterday’s blog, I had a picture of a giant globe that used to be a gas tank. But it’s not the only oversized globe in Savannah. This 20-foot globe, on the waterfront, is called A World Apart, and symbolizes the world divided by World War II, and honors the 527 Chatham County residents who died in the war. 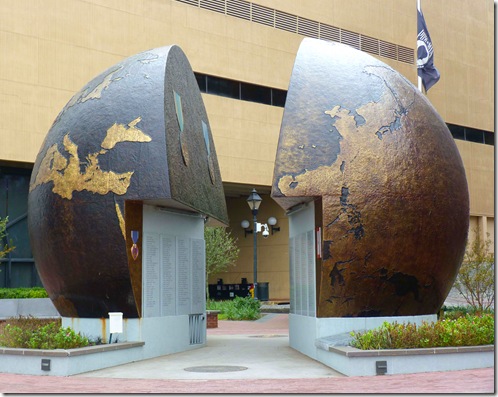 Eventually we walked back into the Historic District, where we stopped at Colonial Park Cemetery, which is so old that the last burial was held here back in the early 1850s! During the Civil War, Union troops occupying Savannah used many of the headstones for target practice. 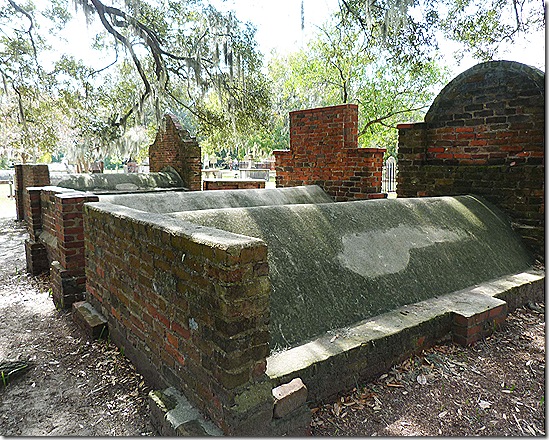 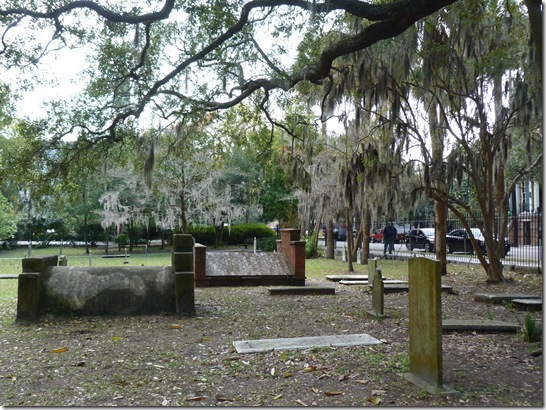 We had to pull ourselves away from the old town area to drive a few miles east to Bonaventure Cemetery, which was featured in the novel Midnight in the Garden of Good and Evil, and the movie based on the book. What a place to, be late in the day on Halloween! 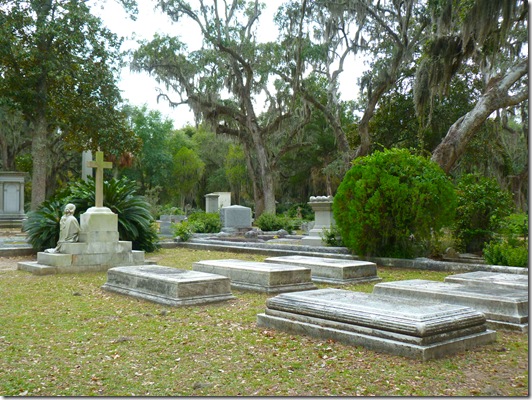 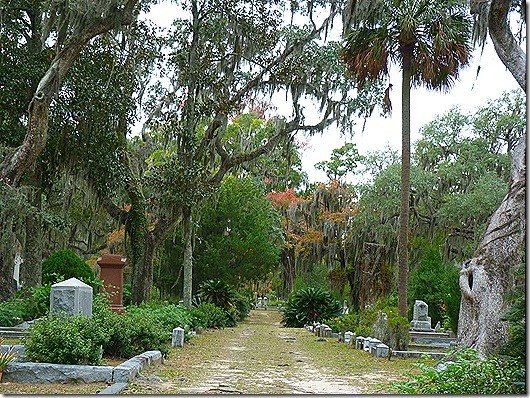 The cemetery has some beautiful statues and monuments. 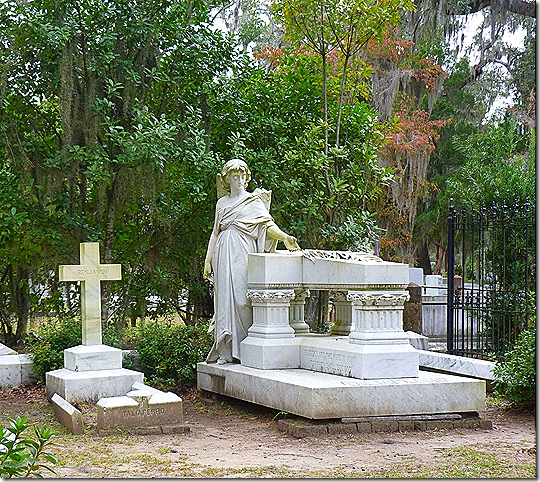 This one is called Little Gracie, and honors Gracie Watson, who died at age six in 1899. A year later, sculptor John Walz carved this life-size, delicately detailed statue of Gracie from a photograph of the child. 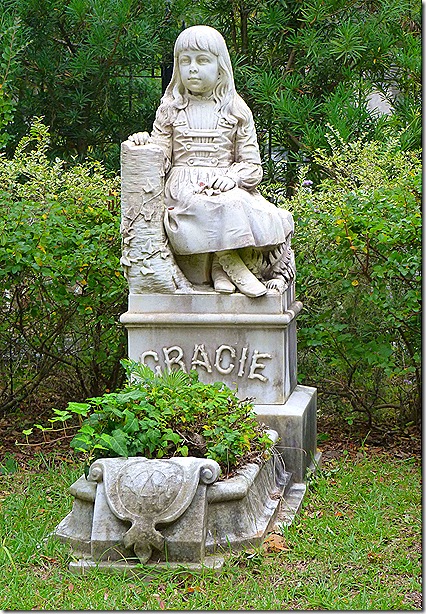 From Bonaventure, we drove another twelve miles to Tybee Island, arriving just in time to take a photo of the Tybee Lighthouse before it closed for the day. 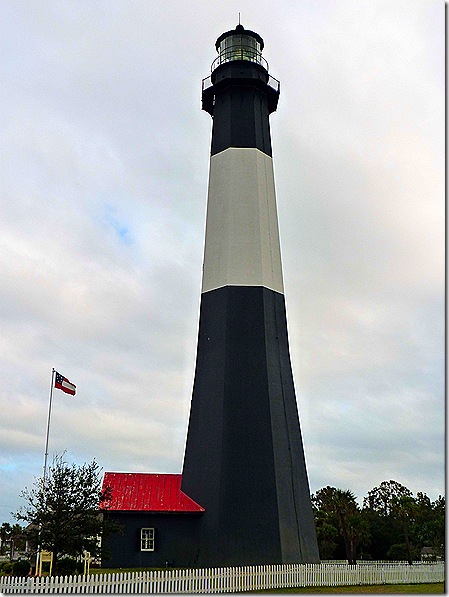 We only spent a short time on Tybee Island, and we have to go back on a future trip. But our first impression was that it doesn’t have any of the charm of Savannah. But then again, that is a hard act to follow!

With our whirlwind tour behind us, today we plan to continue on to Titusville, Florida. But we know we’ll be returning to Savannah. We only scratched the surface on this trip.