When my friend Linda Sand sent me this yesterday, I had to laugh. You have to wonder how something like this slips past the proofreaders. Don’t ask me, but it happens all the time in the publishing business, whether you’re putting up newspapers, books, or magazines. I’ve had my share of gaffes, that’s for sure.

In small towns like the ones where I published newspapers, the opening of a new business is always big news, and usually the Chamber of Commerce and local dignitaries turn out for a ribbon-cutting ceremony and the local newspaper is there to take a picture to commemorate the event. At one of those events, my reporter squeezed everybody together for a photo, and we put it on the front page of the paper. And what a wonderful picture it was! There were the proud new business owners with smiles across their faces holding that giant pair of scissors, there was the mayor and the Vice Mayor and the head of the Chamber of Commerce, and City Councilmen all with happy faces. And right behind them, where everybody could see it, was a large dog taking a dump. Don’t ask me how we missed that, but everybody did.

On Jay Leno’s old Tonight Show, he sometimes had a segment called Headlines, which showed mistakes in newspapers. One of mine from my newspaper in the White Mountains of Arizona made the Headlines. We lived in a resort area, and there was a lot of traffic during the weekends, especially holiday weekends. The previous year’s Independence Day weekend had been marred by a multicar fatal accident that was caused by someone driving drunk. The local supervisor of the Department of Public Safety (DPS) asked me to put something in the paper about them bringing extra officers into the area for the holiday weekend and that there would be zero-tolerance for speeding, drinking and driving, drug use, or anything else that might endanger the public.

To help draw attention to the story, I asked a handsome young DPS officer I knew to pose next to his car, pointing his radar gun, and I took a picture of him. And when the paper came out, right there on the front page it said “Department Of Pubic Safety Out In Force This Weekend”. I didn’t catch it, my proofreader didn’t catch it, the guys running the printing press didn’t catch it, but there it was. Everybody got a laugh out of it, even my young Highway Patrolman friend. I believe he also got a couple of marriage proposals, too.

Another time, at one of my newspapers on the coast of Washington, a local businessman who was a good friend of mine was turning 40. I went into his shop one evening at closing time and caught him just coming out of the restroom, and I told him I needed to take his picture. He didn’t really care for his picture being taken, and when he asked why, I told him I was trying out a new camera. He grumbled about it but said, “okay take my picture.” I told him to quit being such a grump and smile, so he did. This was in the old days when we used film, and before autofocus cameras. We were always taught to focus on a person’s eyes. If the eyes were sharp and clear, the picture would be sharp and clear. So I focused on his eyes.

The next day when that issue of the paper came out, the whole back page was a picture of my friend Bill with a heading that said, “Have You Seen This Man? Bill Erickson Turns 40 Today And Has Been Known To Be Found In The Company Of Card Sharks, Shady Women, And Pool Hustlers. If You See Him, Tell Him Happy Birthday.” And there was Bill, hands on his hips, a big grin on his face, and with his fly unzipped and gaping wide open. By the way, it appeared that Bill went commando. But at least his eyes were sharp and clear!

In my newspaper in Astoria, Oregon, we ran an article about a man who had drowned while salmon fishing on the Columbia River. The man was an avid fisherman, and the reporter who wrote the story wanted to include something about the fact that he was never happier than when he was fishing. Unfortunately, the way she worded it was, “The dead man said he was never happier than when he was out on the water, hooking a big fish.” Who said dead men don’t tell any tales? Maybe not, but apparently they do tell fish stories.

Of course, that wasn’t quite as bad as a competing newspaper in one of the towns on the coast, writing about a heated Town Council meeting. Here is the the background for the story – at a previous meeting, there had been a very sharp verbal exchange between one of the councilmembers and the mayor, in which the councilmember questioned the mayor’s integrity and whether or not his parents had ever been married. Unfortunately, that gentleman died before the next council meeting. The reporter who wrote the story about the next meeting said, “Councilman Sam Williams, who died last week, said, “I believe the mayor is a crook and I doubt his parents were married, knowing what I know about that family.” Again, who says dead men don’t tell any tales?

Probably the most outlandish goof was one that one of my reporters did about a wild police chase down US Highway 101 somewhere around Seaside, Oregon. He wrote that Oregon State Police and County deputies had chased the car at speeds exceeding 1015 mph. That’s way too fast on a curvy road like US 101!

It’s Thursday, so it’s time for a new Free Drawing. This week’s prize is an autographed copy of Crazy Days in Big Lake, the third book in my Big Lake mystery series. This is one of the first printings, with the original cover. To enter, click on this Free Drawing link or the tab at the top of this page and enter your name (first and last) in the comments section at the bottom of that page (not this one). Only one entry per person per drawing please, and you must enter with your real name. To prevent spam or multiple entries, the names of cartoon or movie characters are not allowed. The winner will be drawn Sunday evening. 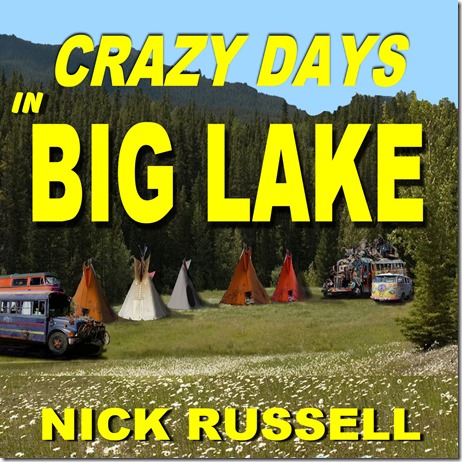 Thought For The Day – Stupidity is not a handicap in politics.