Note: This is a post from 2011 about our first visit to one of my favorite cities.

After a very cold night in Maggie Valley, North Carolina, we made ready to hit the road yesterday morning, about 11 a.m. in search of warmer weather.

We took Interstate 40 into Asheville, where we picked up Interstate 26 and took it southeast across South Carolina. Once we were out of the Smokey Mountains, it was still hilly for a while, but as we got closer to the coast, the terrain flattened out. The autumn colors also got less intense the further we drove. 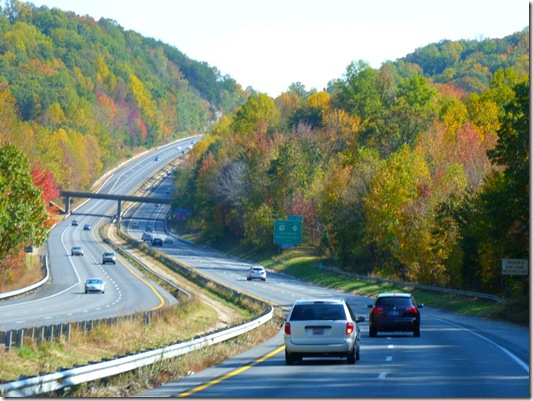 We got onto Interstate 95 and took it south about 80 miles to Hardeeville, where a few miles of good two-lane back road brought us to Hardeeville RV Park, a very nice family-owned campground located just a few miles from Savannah, Georgia. We got a nice level pull through 50 amp full hookup RV site, on grass, for $21 a night Passport America rate. I was able to get 4G service on my Verizon MiFi, but both the 4G and the 3G air card speeds ranged from fairly decent to not at all. I finally switched to the campground’s free WiFi, which was four times faster than the 4G MiFi. At this point, I am not at all impressed with the MiFi. 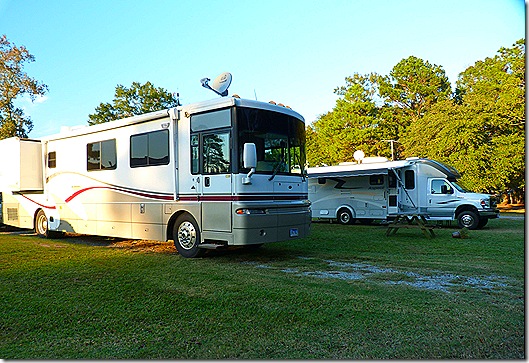 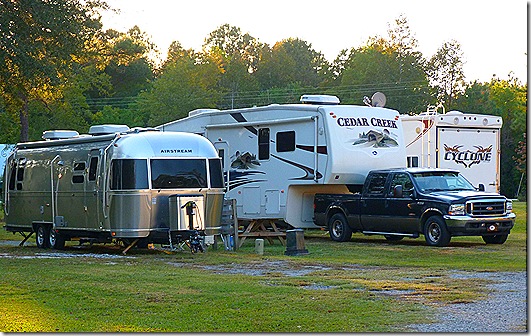 We have never visited Savannah, but I have always wanted to see the historic city at night. I think it’s because of a line I read in a long forgotten book I read when I was a teenager that stuck in my head; “At night, you can shake hands with a ghost on every street corner in old Savannah.” So once we were all settled in, we drove the 10 miles into Savannah, across the beautiful and very high Talmadge Memorial Bridge. I’m glad Terry was driving because that thing is big! 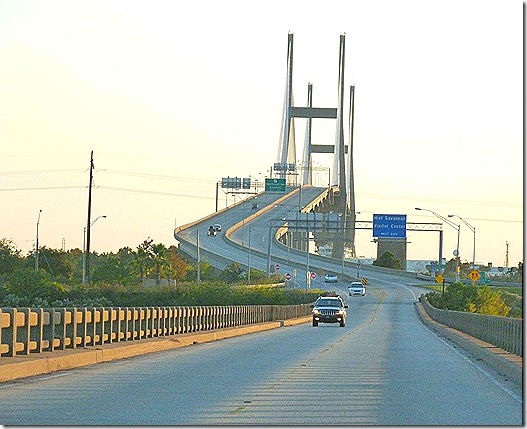 Miss Terry spotted this huge globe behind a fence and we had to stop and check it out. The globe was built in 1957 for the Savannah Gas Company and was actually a 100,000 gallon natural gas storage tank. Today the globe is owned by a mortgage company and used as a one of a kind advertising sign. It certainly got our attention!

An interesting bit of trivia about the globe – when it was repainted in 1998, it included Hurricane Floyd heading toward Savannah. Once it was finished, somebody noticed that the hurricane was depicted (incorrectly) with the clouds turning clockwise. So it had to be blocked out and repainted with the clouds turning in the correct direction. Now I don’t feel quite so bad about all of those typos that slip into the blog! 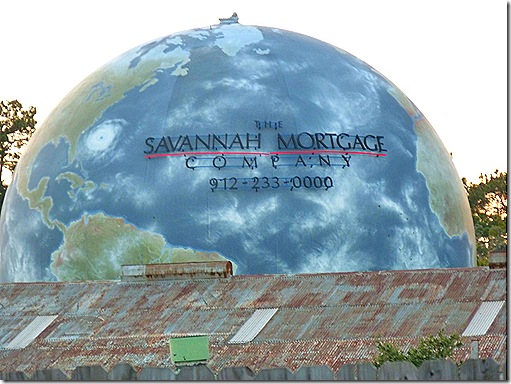 We are history nuts, and after just a short drive through the Historic District, we had both fallen in love with Savannah. There was block after block of beautiful homes, along streets shrouded with huge old live oak trees, draped with Spanish moss. We stopped at the Cathedral of St. John the Baptist to admire the magnificent old church, whose congregation dates back to the early days of the city. The cornerstone was laid in 1835, and when the original church was destroyed by a fire in 1898, the present building was built and opened in 1900. 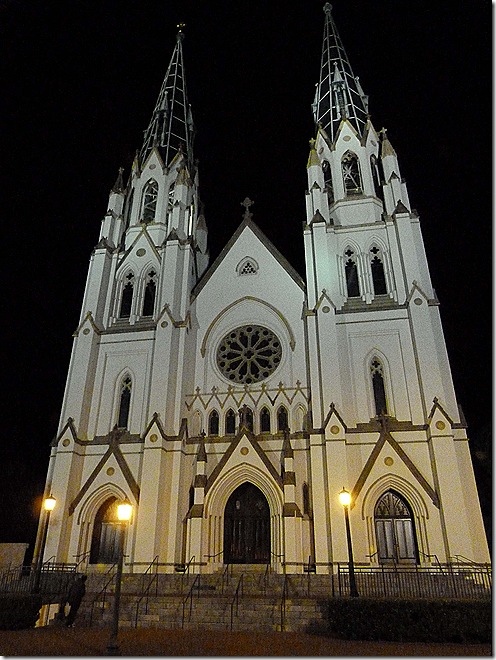 One thing that impressed us about the Historic District is that, even though it was after 8 p.m. and dark, there were quite a few people out strolling the sidewalks, and everybody said hello or nodded and smiled as they passed. Try finding that kind of friendliness in New York or Philadelphia, or even Tucson or Phoenix, for that matter! I really feel a kinship with this beautiful city.

Thought For The Day – If you think you’re too small to make a difference in the world, try going to bed with a mosquito in the room.