Visitors to Historic Deerfield can step back into the early days of Colonial settlement and learn about life in a typical small New England village in the Connecticut River Valley of Massachusetts in the 18th century. 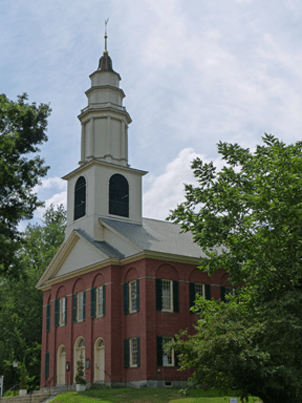 From the Native Americans who lived on this land for 8,000 years to the first English settlers, the farmers, merchants, and townsfolk of Deerfield have seen both tragedy and prosperity over the centuries. This is evident in the memorial to the 56 men, women, and children who were massacred here in a 1704 raid during the French and Indian War, as well as in the stately homes that line the streets, and the elite Deerfield Academy college preparatory school.

Historic Deerfield is a living history museum where visitors can tour eleven homes along an original mile-long street that have been preserved as museums to a unique time and place in our history. 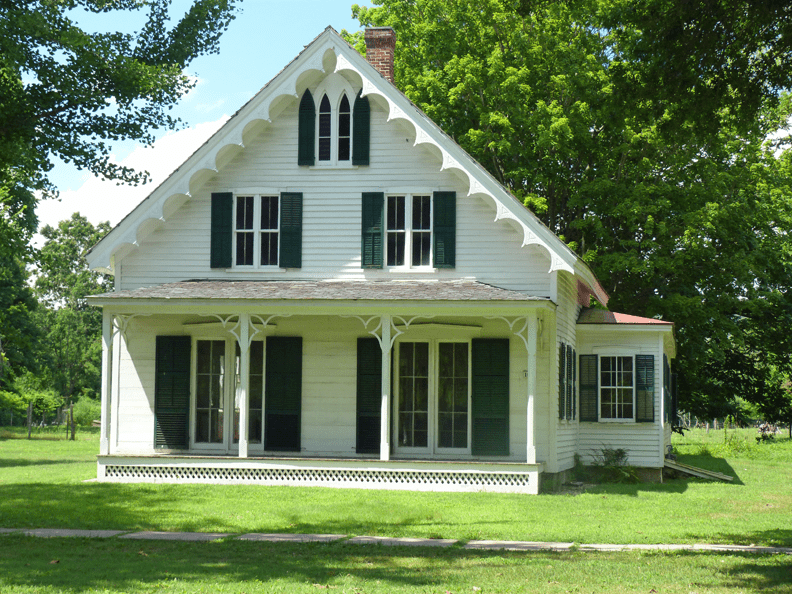 Long before the first Europeans came to the New World, a small but prosperous Indian tribe called the Pocumtucks lived here, farming, fishing, and hunting. But like so many Native peoples, the Pocumtucks suffered greatly by diseases brought by early English explorers. In 1665, those who survived the diseases fell victim to attacks by the warlike Mohawks and abandoned what was left of their village.

The first English settlement in Deerfield was established in 1669, and though the land was rich in resources, the constant threat of Indian attack made life dangerous. The settlement was abandoned in 1675 during King Phillip’s War. The town was resettled in 1682 and suffered more raids.

A stockade was erected around the central part of the town to provide some protection from Indian attack, but during the winter of 1704, the stockade did little to hamper a devastating raid. The snow was drifted so high on February 29 that Indians and their French allies simply walked across it and stepped over the walls. In the bloody rampage that followed, 50 settlers were killed and 112 marched off into captivity in Canada.

Among them was the Reverend John Williams, who watched as the Indians cruelly killed two of his children, ages six years and six months. During the long march north, any captive who could not keep up the pace was quickly executed. In a book about his experiences, Williams later recalled how his wife, still recovering from a difficult childbirth, was slain with a tomahawk blow to the head when she was not able to make her way across a swiftly flowing river.

Many of the surviving captives were later ransomed and returned to Deerfield, though some chose to stay with the Indians who had adopted them. This included Williams’ daughter, who married an Indian and lived the rest of her life with her Indian family.

Over time hostilities ceased, though a militia unit from Deerfield later marched to Lexington during the early days of the Revolutionary War and fought at Bunker Hill. Deerfield became a prosperous community of farmers, craftsmen, and traders. Today visitors can enjoy a peaceful visit as they tour the historic homes, a classic New England inn, and the Memorial Hall Museum.

The first stop for visitors to Historic Deerfield is the Visitor Center, located in the Hall Tavern, which was originally built in 1760, in Charlemont, Massachusetts, about 20 miles west of Deerfield. Here visitors can purchase tickets, watch an orientation film, and learn about the special activities going on that day. At different times of the year visitors may see open hearth cooking demonstrations and take part in classes offered at the Tavern.

The Cooks’ Garden, located behind Hall Tavern, provides fresh ingredients for the museum’s cooking demonstrations and classes. The garden contains an assortment of useful plants commonly found in New England during the 18th and early 19th centuries.

Next door is the Asa Stebbins house, which was built in 1799. It was the first brick house in Deerfield, and the interior features furnishings dating from 1790 to 1830. Stebbins was one of Deerfield’s wealthiest and most highly respected citizens and he spared no expense in building his home. The house boasts scenic wallpaper panels by Joseph Dufour depicting the voyages of Captain Cook, and a freehand wall painting believed to have been executed by itinerant artist Jared Jessup, in 1812. 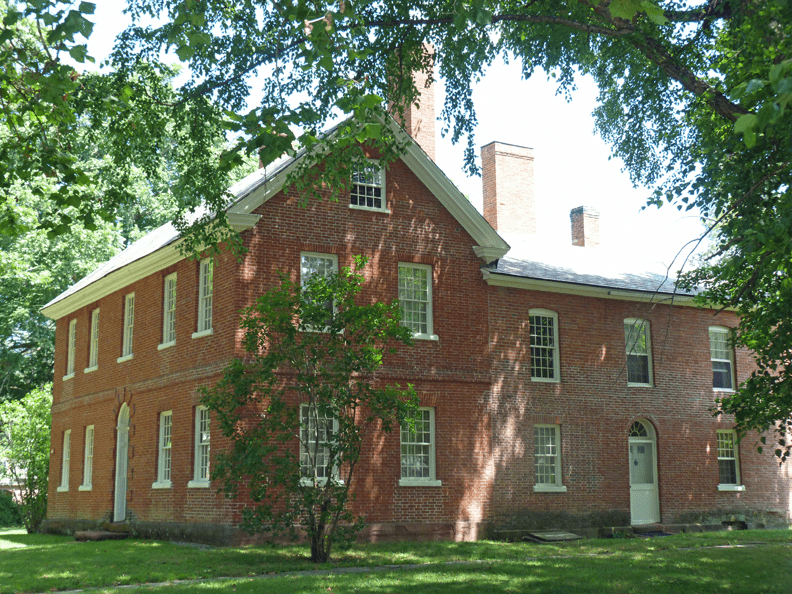 From there, the next stop is the Allen house. Built in 1734, the Allen house served as the residence of Historic Deerfield’s founders, Henry and Helen Flynt. They purchased numerous houses along the street between 1942 and 1962. The interiors of this house have been left as they were when the Flynts lived here with their outstanding collections of American antiques.

The next house, which was built in 1814, displays the Henry Needham Flynt Silver and Metalware Collection, which contains more than 4,000 pieces of American and English silver in a variety of forms. The communion silver of the First Church of Deerfield, the First Churches of Northampton, and the First Church of Sunderland, Massachusetts, are included in the display. The building has a silversmith’s workshop with many traditional tools, and a room devoted to pewter and other metalwares made and used in early America.

Behind this house is the History Workshop, offering hands-on activities that include spinning, weaving, and other pioneer skills. During our visit, a volunteer was demonstrating how flax was broken down into fibers used to make linen. 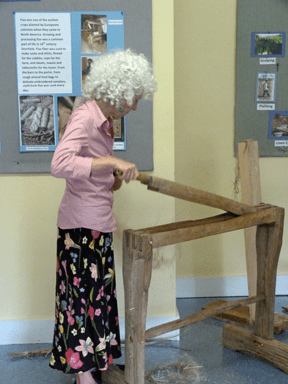 The center of village life was the Barnard Tavern, built in 1795. Here townspeople and travelers exchanged news and opinions, conducted business, read mail and newspapers, and posted broadsides. Meals were prepared in the kitchen, drinks served in the bar room, and dances, plays, court sessions, meetings, and auctions were held in the upstairs assembly room.

Built in 1747, the Wells-Thorn house presents period rooms depicting the lifestyle of Deerfield residents in a progression from the early days of 1725 all the way up to the 1850s. It is furnished to illustrate the development of the agricultural economy, domestic life, and refinement in the Connecticut Valley. The earliest rooms of the Wells-Thorn house show life in Deerfield during the frontier period. As consumer goods became more plentiful, craftsmen expanded their skills and gentility, and modernity replaced security as a concern. Later period rooms in the house reflect the increased availability of consumer goods and the growing prosperity and sophistication of Deerfield’s residents.

The Deerfield Inn is a classic, full-service original country inn built in 1884 that continues to welcome travelers from around the world. While retaining its early-day charm, the Inn offers guests modern amenities and conveniences. 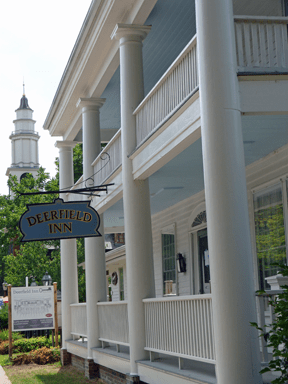 Historic Deerfield is home to one of the best public collections of art and antiques in America. Begun and formed in large part by founders Henry and Helen Flynt during a lifetime of collecting, the collection has been refined with hundreds of additions by professional staff since the mid-1970s. Much of the collection is on display in Deerfield’s historic houses, as well as in the Flynt Center of Early New England Life.

Among the many diverse items in the vast collection are Connecticut River Valley furniture, thousands of ceramics, pottery, textiles, needlework samplers, hundreds of original oil paintings, maps and prints, silver and metalware, hundreds of pieces of English and American glass, one of the finest collections of engraved powder horns dating back to the French and Indian War and the American Revolution, folk art, and the Frank Boyden Carriage Collection.

The Old Burying Ground at the end of Albany Road is open to the public during daylight hours and offers a wealth of information about the early settlers of the area. Here are buried many of the first settlers, as well as the victims of the Deerfield Massacre. 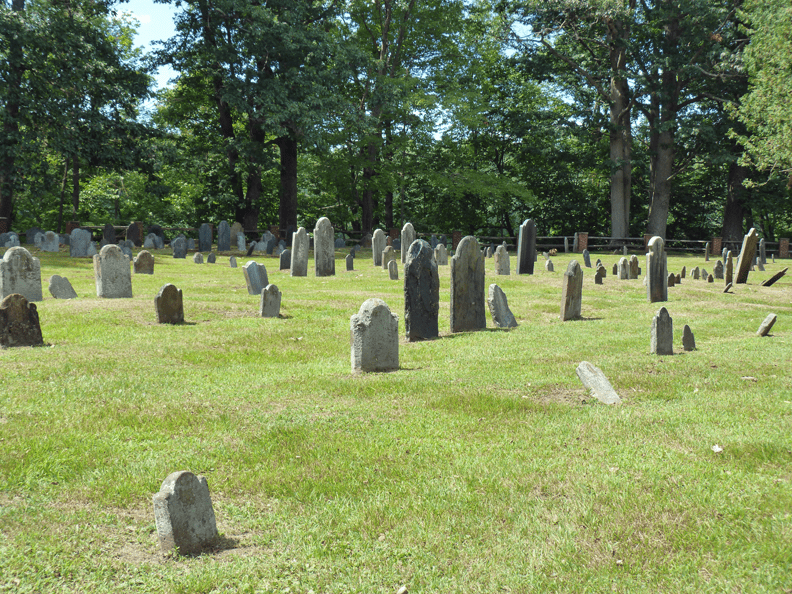 The Museum Gift Shop and Bookstore carries a variety of American craft items, jewelry, and reproductions as well as souvenirs and a fine selection of books about life in Colonial New England.

Historic Deerfield is located 30 miles north of Springfield, Massachusetts via Interstate 91 and U.S. Highway 5, and is open daily from 9:30 a.m. to 4:30 p.m. from April through December. General Admission through November is $15 for adults, and ages 6 -17 and free.

Visitors with mobility challenges should start their visit at the Visitor Center at Hall Tavern, where wheelchairs are available. Visitors in wheelchairs are able to gain access to the first floors of several museum houses, the Cooks’ Garden, the Memorial Libraries, the Flynt Center of Early New England Life, the Deerfield Community Center, the Deerfield Inn, and the Museum Store. Restrooms with handicapped facilities are located behind the Hall Tavern Visitor Center, at the Flynt Center of Early New England Life, at the Deerfield Inn, and behind the Williams House.

Thought For The Day – Shoot for the moon. Even if you miss, you will land among the stars.