Nick's Blog » Can You Say Moo?

Montgomery, Alabama’s MOOseum offers a fun and interactive way for people of all ages to learn about Alabama’s beef cattle industry. Each year 10,000 school children and adults tour this unique hands-on educational museum, where they learn about the history of the beef cattle industry, the contributions the industry makes to society, and the many products that come from cattle, besides milk and beef. 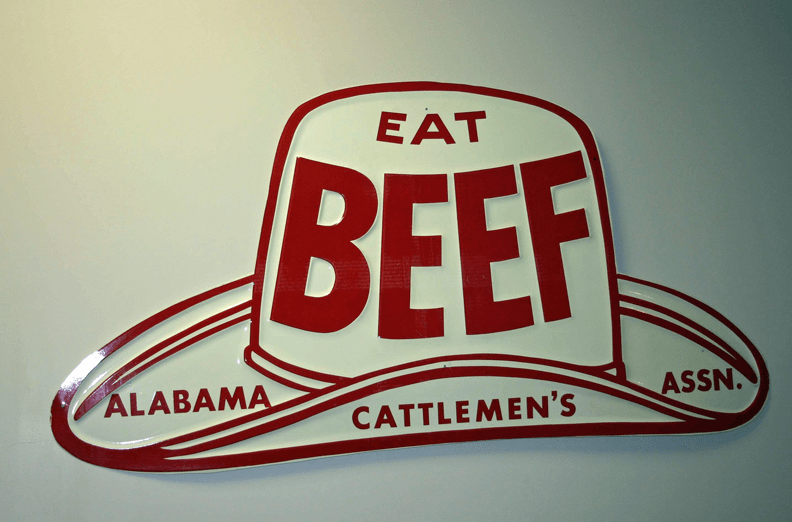 “Dusty,” a Texas Longhorn whose massive horns span six feet from tip to tip, greets visitors to the MOOseum. Then visitors meet Adam Bainbridge, a one-of-a-kind cattleman. Adam is an animatronic; an animated mannequin whose lifelike facial expressions and eye movements will leave you in awe. As the official spokesman for the Alabama Cattlemen’s Association, Adam recalls some of the history of cattle in Alabama and gives an overview to the MOOseum’s galleries. He is always a big hit with school kids, and adults are just as fascinated with him. 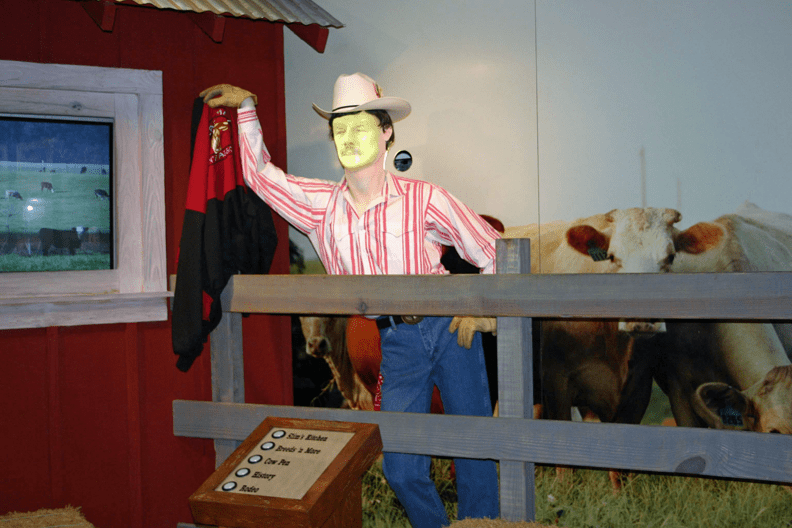 The MOOseum is billed as a Children’s Educational Center, but we also learned a lot during our visit. I had no idea just how many products that we use everyday come from cattle! Gelatin, made from beef tallow, makes Jell-O jiggle, and helps fluff up ice cream and marshmallows. Plasma protein from cows is used in cake mixes and pasta. Cattle even help feed our pets! Beef bones and beef scraps are used in pet foods to help make them tastier and more nutritious.

More than 98% of a cow is used in one way or another. Ingredients from cows’ organs and glands are used to make insulin for patients with diabetes, and ACTH for arthritis sufferers. Thrombin is used to help make blood clot. Many products inside our homes come from cattle. Their hides are turned into leather for shoes and belts, baseballs and sporting equipment; candles, cosmetics, crayons, paint, shampoo, and soap contain fat and fatty acids; bandages, wallpaper, glue, and piano keys are made from horns and hooves. Hairs from cowhides are used to make paintbrushes. Binding agents from beef fat are used in automotive brake fluid, car polishes, waxes, tires, and antifreeze, and even the asphalt on our streets. Even cow manure is put to use to fertilize gardens!

The MOOseum provides an interesting look at cattle and the cattle industry. There are more than 75 breeds of cattle in the world. Most of the cattle in North America and Europe belong to the species Bos taurus, while the humped cattle of India and Africa have the scientific name Bos indicus. A newborn calf weighs about 80 pounds, and will be up and walking within minutes of birth. A full grown bull will weigh more than a ton, while an adult cow can tip the scales at 1,100 pounds.

Cattle play an important role in the food chain. Sun, rain, and soil produce grass, which a cow eats and turns into nutritious milk and meat for human consumption. Cattlemen supplement their herds’ diets with hay, molasses, salt, and other minerals to produce large, healthy animals for market. A cow will drink between 10 and 20 gallons of water a day.

The MOOseum’s history gallery tells the story of Alabama’s cattle industry and the men and women who built it. The state’s cattle herds nearly disappeared during the Civil War. Since beef was a valuable food source for both armies, cattle were valuable “spoils of war.” Soldiers had orders to get cattle by any means necessary, and while farmers drove their herds into the forest to hide them, both Union and Confederate forces were adept at finding them. Worn out from a diet of dried beef and jerky, the first thing an advancing army did was to seize the local beef and enjoy fresh meat. By the end of the war, very few cattle had survived in Alabama. It took years for the beef industry to recover.

The MOOseum honors Alabama’s working cowboys with displays of clothing and equipment, ranging from cowboy hats and chaps to branding irons and lariats. Everything a cowhand wears has a definite purpose. The wide brim on his cowboy hat keeps the sun out of his eyes and protects his head from low hanging branches. The hat can be used to carry water or fan a campfire. Chaps, the leather leg coverings a cowboy wears, protect his legs from thorns and brush, and his boots protect his feet. The heels on a cowboy’s boots keep his feet from getting caught in his saddle’s stirrups. Even his bandana serves a purpose, keeping dust and hot sun off his face, and it can be used as a sling or tourniquet in case of serious injury.

The lariat is a cowboy’s most important tool. He uses it to catch his horse, rope a steer, or to pull a stuck cow out of the mud. At roundup, he uses it to rope calves for branding. Most lariats are made from hemp and are about 40 feet long. At the end of the rope is a honda or loop, through which the main line of the lariat passes. To throw the lariat, the cowboy holds the honda and main line in his throwing hand and the rope coil in the other. As he tosses the loop around a steer’s horns with one hand, he uses the other hand to tie the end of the main line to his saddle horn.

At one time, cattle were branded to identify who they belonged to. Branding was a major job in the early days of cattle ranching. Few ranches had corrals or pens with head catches and chutes, so cowboys roped the calves and held them down while another ranch hand branded them with a hot iron. These days ear tags have replaced brands and each tag is individually numbered so a cattleman can track every animal’s growth and maintenance. 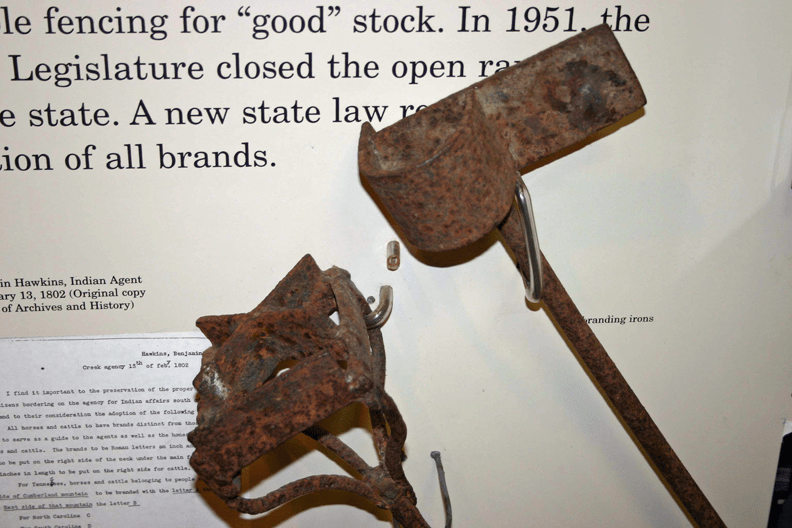 Cattlemen work hard to raise healthy animals, and the MOOseum’s exhibits show the steps used to inoculate animals against common diseases and to provide preventive care. A chute used to hold cattle while being treated is on display, along with examples of equipment used to grow healthy herds. 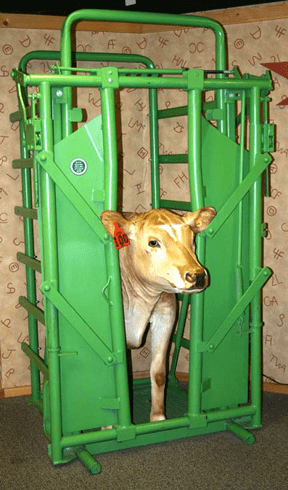 Kids love the MOOseum’s interactive displays, where they can dress up in cowboy clothes, climb into the saddle and play rodeo, and work in a child-sized kitchen that demonstrates the proper care of meat and safe food handling. 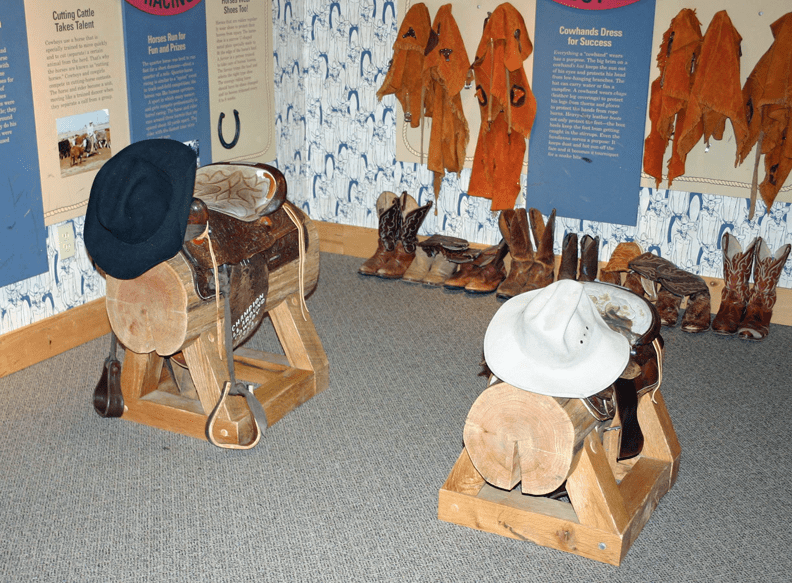 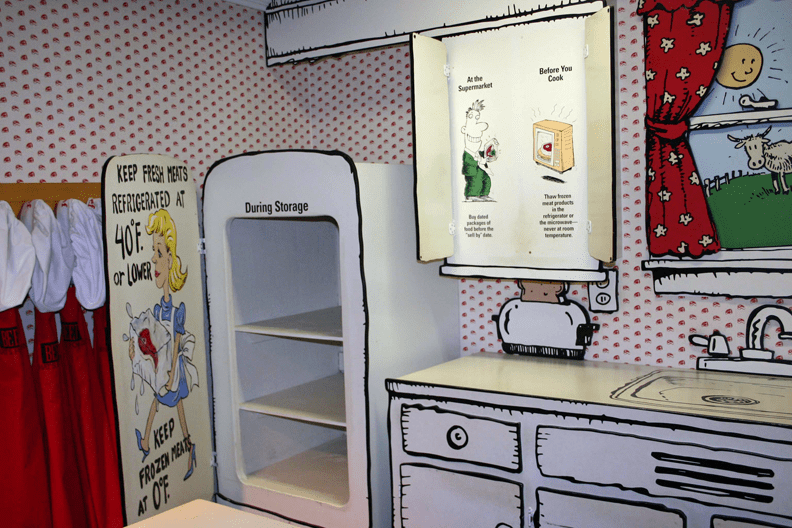 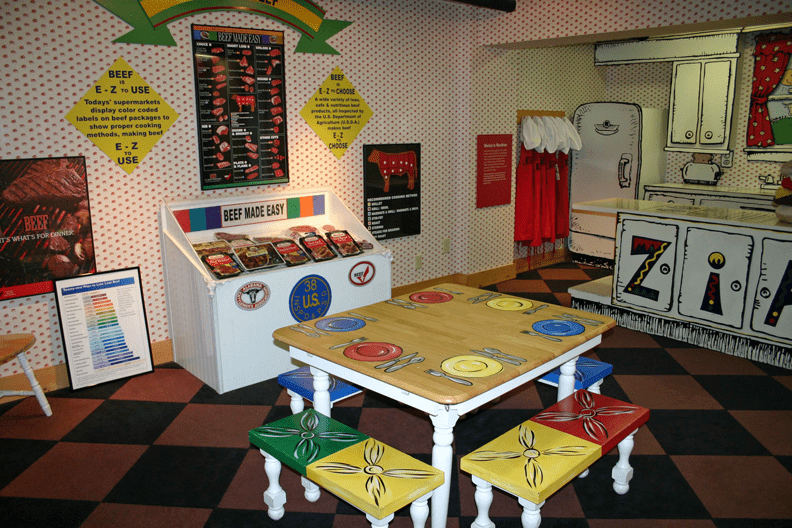 Beef – it’s what’s for dinner, and the Alabama Cattlemen’s Association and the MOOseum will give you a better understanding of just how important beef is to America. And just in case you might forget, you can buy items with that very slogan in the MOOseum’s gift shop!

The MOOseum is located at 201 South Bainbridge Street, two blocks south of the State Capitol on the corner of Adams and Bainbridge in the Alabama Cattlemen’s Building. The MOOseum is open Monday through Friday from 8 a.m. to 4:30 p.m. They close for lunch from noon to 1 p.m. and admission is free. For more information on the MOOseum, call (334) 265-1867.

Congratulations Tom Julkowski, winner of our drawing for an autographed copy of Crazy Days in Big Lake, the third book in my Big Lake mystery series. We had 75 entries this time around. Stay tuned, a new contest starts soon.

Thought For The Day – When this is over, what meeting do I attend first, Weight Watchers or AA?