Note: This is a story from my book Highway History And Back Road Mystery.

In a tiny roadside park sandwiched between U.S. Highway 26 and the Burlington Northern railroad tracks on the eastern edge of Scotts Bluff, Nebraska, sits the lonely grave of Rebecca Winters, one of the thousands of pioneers who set out in search of a better life in the west and never made it. 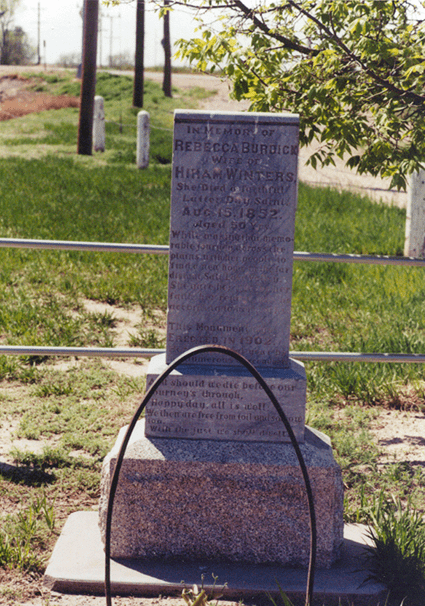 But unlike so many of her fellow travelers who succumbed to disease, injury, and Indian attack on the westward trek and were often buried in unmarked graves, Rebecca Winters’ final resting place is commemorated with a metal historical marker and a gravestone in tribute to the respect she earned from her family and fellow pioneers. Her story is a prime example of the hardships and perils that faced the early settlers making their way westward. Rebecca Winters was born in New York state in 1802, the daughter of Gideon Burdick, who had fought in the Revolutionary War.

Rebecca, a very warm and caring person, and her husband Hiram were among the earliest members of the Mormon Church, being baptized into the faith in June of 1833. In those days of intolerance, Mormons often faced severe persecution at the hands of non-believers, and the Winters family was no exception. They were forced to relocate several times, seeking new homes in Ohio, Illinois, and Iowa. Finally, in June of 1852, the family joined with other members of the Mormon Church to make the trip west to Utah, part of the great exodus to the new land where they hoped they could live in peace.

The frontier held many perils for the hapless immigrants making their way west. Flooded rivers could sweep a wagon away and pull its occupants under. Bears, wolves, and rattlesnakes sometimes lay in wait of the careless trespasser, and there was always the threat of marauding Indians. But the biggest danger was cholera. The dreaded disease killed thousands during the course of the westward migration. Somewhere along the Platte Valley, several people in the Winters’ wagon train contracted the disease, among them Rebecca. She died on August 15, 1852.

Usually, when an emigrant died, their graves were hidden by their family, often dug directly in the roadway, and wagons were driven over the grave to destroy all signs of its presence. This may seem callous to us, but there was a practical reason for the practice, as it reduced the chances of wild animals finding and disturbing the grave. There was seldom time materials to erect any sort of grave marker.

Rebecca Winters was a rare exception. Her husband and a close family friend, William Reynolds, went to great lengths to preserve her grave, a testament to how well she was loved by all who knew her. They dug an unusually deep grave, then lined the bottom with a layer of planks from abandoned wagons. Rebecca’s friends and family couldn’t bear the thought of dirt touching her, so her body was carefully wrapped in blankets, and a second layer of planks was placed over it.

After the grave was filled in, William Reynolds chiseled the words “Rebecca Winters, Age 50” into a metal wagon rim. Reynolds’ daughter Ellis held a candle for him to see by as he worked into the night. The rim was bent into an oval, approximating the outline of a tombstone and embedded over Rebecca’s grave. Their sad chore done, the family and their companions continued on their journey west, finally settling in Pleasant Grove, Utah.

The crude grave marker that William Reynolds fashioned stood through decades of prairie winters, fierce summer storms, and wildfires, and in 1899 it led to the rediscovery of the grave by a team of surveyors planning a route for the Burlington Northern railroad. The tale goes that, out of respect for the grave, the railroad’s original route was changed slightly to protect it, and the tracks were laid a few feet away from the grave.

At the end of the twentieth century, expanding rail traffic and an increasing number of visitors to the gravesite raised concerns for visitor safety, and the railroad contacted the Winters family descendants for permission to move the grave to a safer, more accessible location. The family agreed, and on September 5, 1995, a team of archaeologists from the Nebraska State Historical Society opened the grave, with 65 members of the Winters family looking on.

Rebecca’s remains were removed to a new site only 400 yards away, just off Highway 26, where she was again laid to rest in a beautiful mahogany casket on October 14, 1995. Some 125 of Rebecca’s descendants were on hand for the solemn ceremony, including her 16-year-old great-great-great-granddaughter, also named Rebecca Winters. Also attending the service was the great-granddaughter of William Reynolds, the man who had chiseled the metal marker at the original burial, 143 years before. Today the wagon rim still stands over the grave as it has for 168 years, a tribute to a much loved pioneer woman, and the respect in which she was held by those who knew her.

Thought For The Day – Never let the sadness of your past or the fear of your future ruin the happiness of your present.