Maybe I’m just weird, but while most young boys my age were lusting over Annette Funicello or Sky King’s niece Penny, I was in love with Morticia Addams, the matriarch of the Addams Family, on our old black and white television.

Maybe it was her high cheekbones, or the long black hair, or those octopus legs; whatever it was about the woman, I was in love. Or at least lust. And though she was probably the original Goth girl, Morticia had a soft side to her. Who can forget her lovingly feeding her African Strangler plant, which she named Cleopatra?

I think Morticia would have felt right at home if she were to visit the Darlingtonia Wayside, which is located a few miles north of Florence, Oregon. 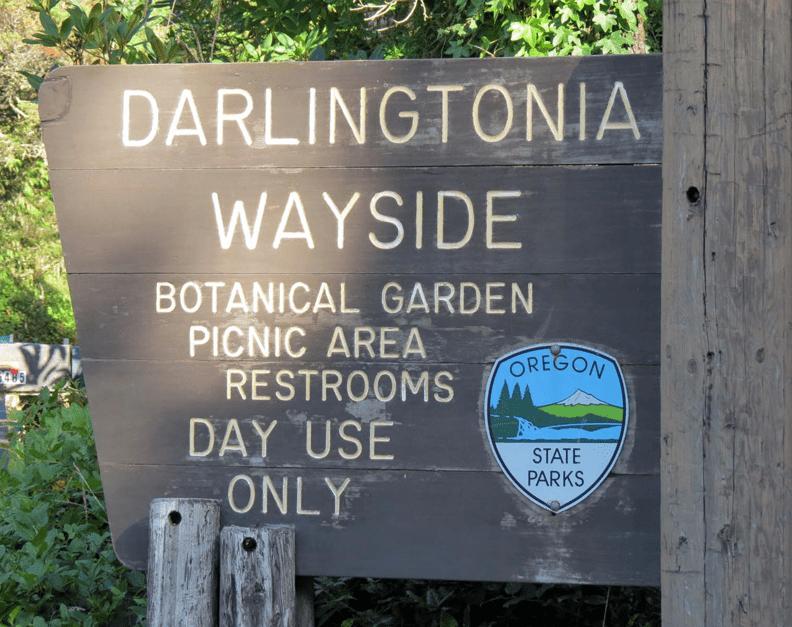 The small day use wayside is the perfect example of the kind of surprises awaiting you when you get off the busy interstate highways and travel America’s two lane roads. The wayside has picnic tables and restrooms and a path that leads to an interesting botanical garden that is home to the interesting Darlingtonia californica, also called the cobra lily. 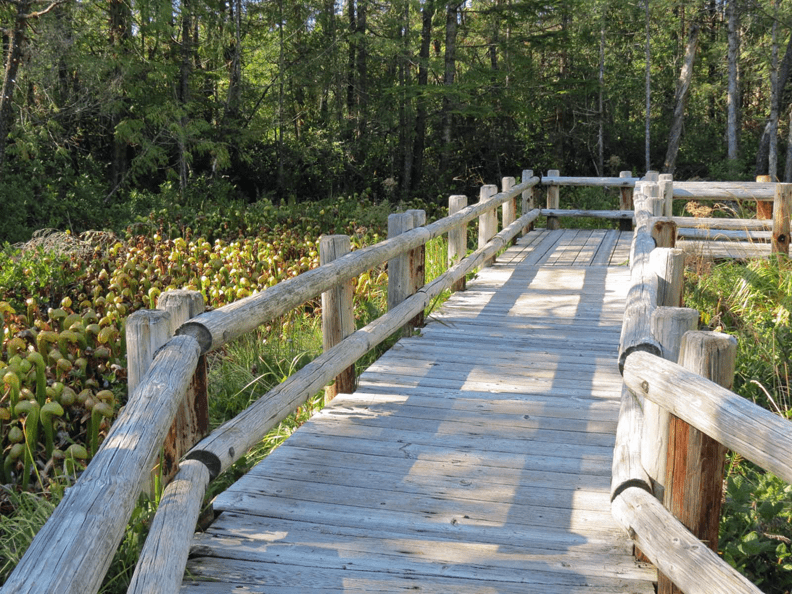 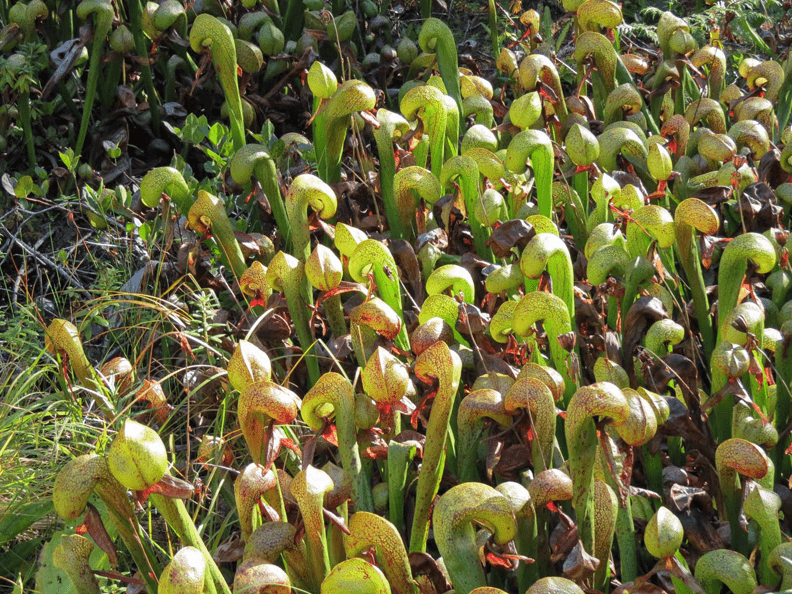 These interesting carnivorous plants have yellow-green hoods and 10 to 20 inch stalks that are hollow tubes. A sweet smelling nectar attracts insects into a hidden opening in the stalk that is bordered by a large mustache-shaped appendage beneath the curved hood. Once inside, the insect becomes confused by transparent areas that appear like exits and moves deeper and deeper into the depths of the plant, where it is trapped by sharp downward pointed hairs until it tires and drops into a pool of liquid at the bottom. Bacteria in the liquid decomposes the victim and it is then absorbed by the plant. Tell me Morticia wouldn’t love these things! 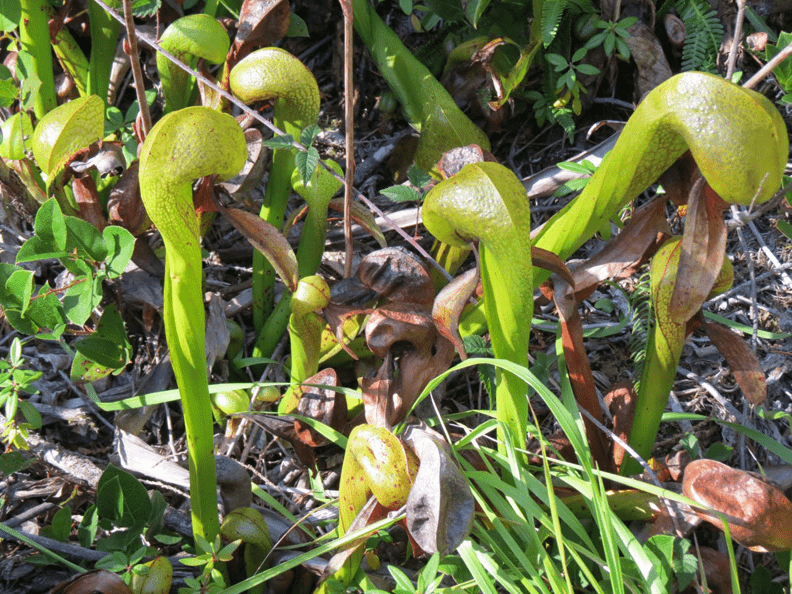 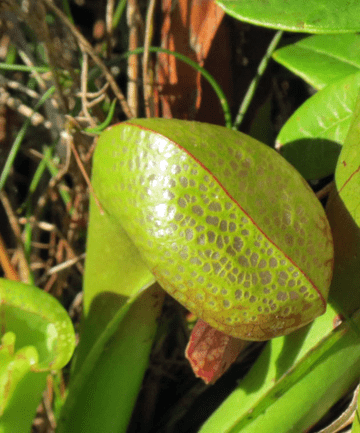 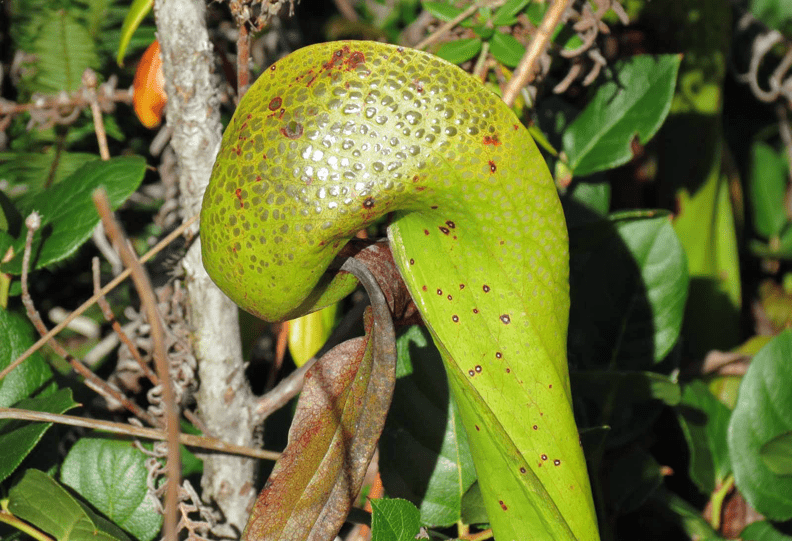 These surprisingly beautiful plants, which are found in bogs in northern California and southwestern Oregon, flower in May and June, with hanging yellow and red blooms. The erect seed pods remain through summer and into early fall.

The next time you find yourself on the Oregon coast, stop and check out the Wayside. It will not accommodate large RVs, but smaller Class C or B vans would not have a problem.

It’s Thursday, so it’s time for a new Free Drawing, and we’ve got another great prize this week. This week’s prize is an audiobook of Dead Letter by Catherine Bender. The first book in the M. Falcon mystery series, it’s the tale of amateur detectives in their golden years with a treasure trove of unexpected skills and unconventional tactics, including a sweet wheelchair bound grandmother type who is a master computer hacker, a semi-retired actress who seizes the opportunity to live her dream of being a super spy, a homeless veteran, and other blue hairs who are not content to rock their lives away in boring retirement. To enter, click on this Free Drawing link or the tab at the top of this page and enter your name (first and last) in the comments section at the bottom of that page (not this one). Only one entry per person per drawing please, and you must enter with your real name. To prevent spam or multiple entries, the names of cartoon or movie characters are not allowed. The winner will be drawn Sunday evening.

Thought For The Day – I bought a new stick deodorant and the instructions to remove cap and push up bottom. I can barely walk, but when I toot the room smells lovely.