At one time Fort Smith, Arkansas was a wide open town where gamblers and prostitutes, bootleggers, and Indian traders all flourished on the traffic that came up the Arkansas River and across country headed for the Indian Territory of Oklahoma. This was the last bastion of civilization, the home of “Hanging Judge” Isaac Parker’s Federal Court, a wild place known as “Hell on the Border.”

Any trip into Fort Smith’s colorful past should begin at the city’s historic Miss Laura’s Visitor Center. Built just before the turn of the last century, in 1896, as the city’s unique Riverfront Hotel, the ornate Victorian building soon became widely known as “Miss Laura’s,” the premier bawdyhouse in the rough-and-tumble part of Fort Smith along the Arkansas River. 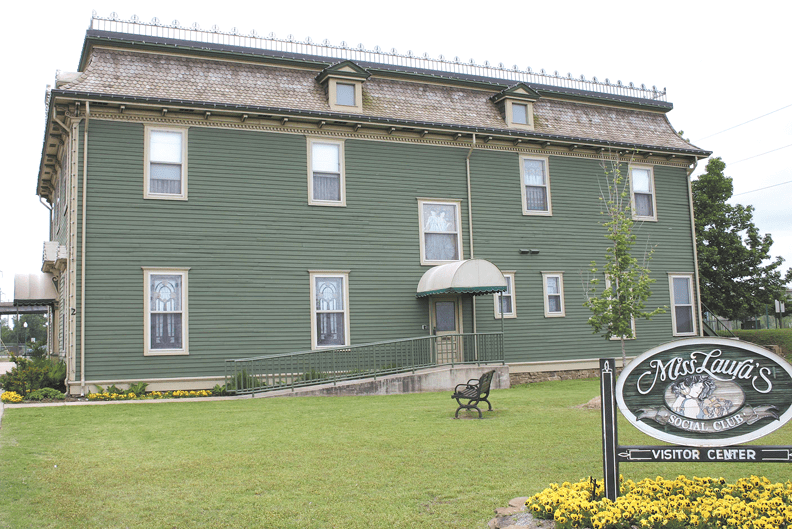 One of seven houses of ill-repute in the red light district located between the river and the railroad tracks, two important sources of business, Miss Laura’s Social Club was known as the “Queen of the Row” in the wild border town. The building was purchased in 1903 by Laura Zeigler, a prostitute who had moved to Arkansas from Vermont. She raised the money necessary with a $3,000 loan from a Fort Smith bank. It is said that her bordello was so successful that she paid off her debt in a matter of months.

Laura Zeigler turned her business into the classiest house on the “row.” Her working girls were not allowed downstairs unless they were fully dressed, and they received regular medical checkups, the results of which were tacked to the appropriate bedposts. Miss Laura hired only the best looking prostitutes, and charged accordingly. While the competition’s standard price was one dollar, Miss Laura’s girls charged three times as much.

Customers were greeted in the house’s elaborately decorated parlor, where they enjoyed a cigar and brandy while chatting with the ladies, then they made their selection and headed upstairs to the private rooms. 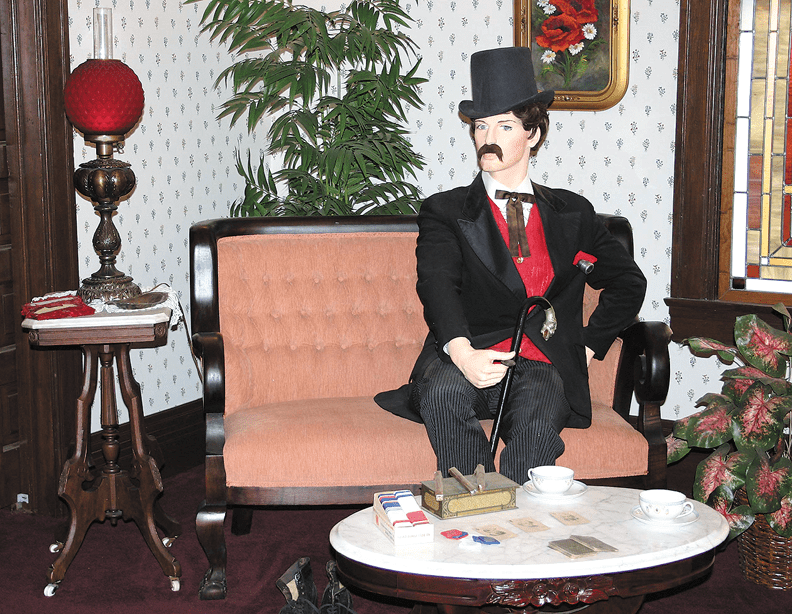 Miss Laura was a gracious hostess, but she did not suffer fools well, and a Smith and Wesson revolver sits handy on the nightstand of her bedroom in her private suite across the hall from the parlor. 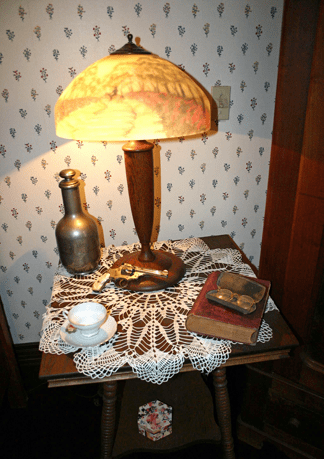 Miss Laura’s competition all but disappeared in the winter of 1910 when a fire raged through the row and destroyed five of the bordellos. Flames were licking at Miss Laura’s gingerbread porch when the wind shifted and saved her business.

Miss Laura sold the brothel to Bertha Gale Dean in 1911 for $47,000 and left town. The bordello continued to be known as Miss Laura’s, and even though legalized prostitution ended in 1924, Miss Laura’s stayed open into the early 1940s, doing a steady business with soldiers stationed at nearby Fort Chaffee. Local laws required that every working girl have a monthly examination by a doctor and post her health certificate, just as Miss Laura had instituted from the very beginning.

Following the death of Bertha Dean, in 1949, the building was bought and sold several times and began to deteriorate. It was saved from the wrecker’s ball in 1963 when a local businessman purchased it and remodeled it as an upscale restaurant. In 1992 it became Fort Smith’s Visitor Center, but the building was heavily damaged by a tornado four years later. It has been completely restored to its original beauty, and today Miss Laura’s is the only former brothel on the National Register of Historic Places.

Visitors to Fort Smith can take a free tour of the old brothel and marvel at the handsome wood trim, stained glass windows, and beautiful textured wallpaper. If you did not know it’s history, you would believe that the building had been the home of a prosperous banker or merchant.

Downstairs, Miss Laura’s private suite has been totally restored, as well as the reception parlor across the hall. 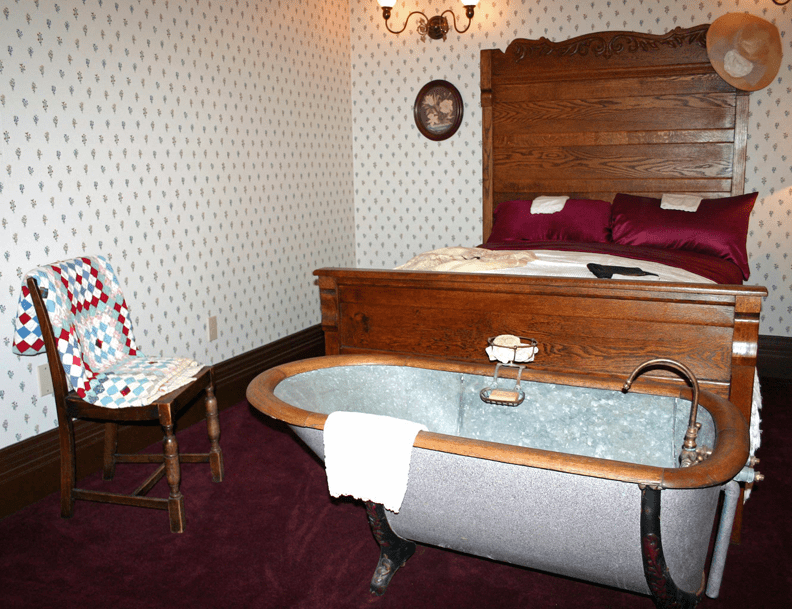 Most of the bedrooms upstairs are now used for office space, though one is open and decorated as it was during the brothel’s working days. Above each door the occupant’s name is etched into the frosted glass. Our tour guide told us that since having the glass replaced when a girl left was too expensive, her replacement just took on her working name. 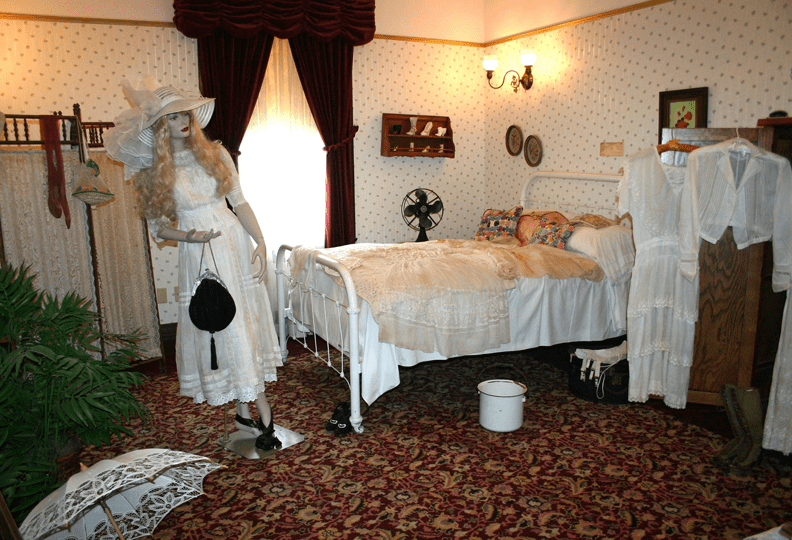 Several showcases display artifacts from Fort Smith’s past, including tokens given to customers and local politicians that could be exchanged for a girl’s services during their next visit to the bordello. Women visitors are given their very own health certificate, a copy of one a working girl was required to post on her headboard back in the day.

Congratulations Julian Banks, winner of our drawing for an audiobook of Big Lake, the first book in my Big Lake mystery series. We had 54 entries this time around. Stay tuned, a new contest starts soon.

Thought For The Day – Be careful when you follow the masses. Sometimes the M is silent.