Back in the 1930s when times were hard, gangsters like John Dillinger, Pretty Boy Floyd, and Baby Face Nelson became folk heroes to many people who had seen their savings lost during the bank failures of the Great Depression. But not every would-be bank robber made the big time. One who failed miserably was Jack Gracey.

Gracey was a 28-year-old ne’er-do-well who had done time in the Michigan State Prison in Jackson, where he decided to make a name for himself and strike it rich at the same time after he got out. He learned that the Dow Chemical Company’s $50,000 payroll was held in the Chemical State Savings Bank in Midland, Michigan. That was to be his big score.

Recruiting his former cellmate, 37-year-old immigrant Anthony Chebatoris, who had recently been paroled after serving sixteen years of a twenty-year sentence, the two staked out the bank before putting their plan into motion on September 29, 1937.
Entering the bank just before noon, with a rifle whose barrel and stock had been cut down to be concealed under his coat, Gracey accosted bank president Clarence Macomber.

While Macomber had always told his employees not to resist any robber, to just give them the money and let them go, when Gracey stuck his rifle in his ribs, the bank president took exception to that. He grabbed the rifle barrel and shoved the intruder toward the door.

Surprised by the resistance, Gracey didn’t respond. However, his accomplice did. Pulling a .32 caliber Smith & Wesson revolver from his pocket, Chebatoris shot the bank’s president, wounding him in the side. Rushing forward to help his boss, head teller Paul Bywater was shot in his stomach by Chebatoris and collapsed.

That was enough for the bandits, who fled without any loot. They might have made a clean getaway except for the quick actions of dentist Frank Hardy, whose office was on the second floor of a building next door to the bank. Hearing the shooting, he left his patient and went to the window to see what was happening.

Dr. Hardy was an experienced hunter and a veteran of the Great War. Seeing the armed bandits running away from the bank, Dr. Hardy picked up his Remington deer rifle and shot Chebatoris in the shoulder.

The robbers fled down the street and jumped onto the running board of a Ford truck. Pointing a gun at the driver, they ordered him to get them out of there if he wanted to live. A second later, the dentist fired again and hit Jack Gracey in the forehead, killing him instantly.

With his partner dead and their plan thwarted, Chebatoris looked around in a panic, trying to find the deadly marksman. Seeing deliveryman Henry Porter and mistaking his uniform for that of a police officer, he opened fire, hitting the hapless civilian.
Hoping to make his getaway, Chebatoris jumped into a car parked at the curb, but before he could get it started, angry bystanders pulled him through the window and gave him a good beating before Midland County Sheriff Ira Smith took custody of the wounded man.
Two weeks after he was shot, deliveryman Henry Porter succumbed to his wound, turning what had started out as a bank robbery into a murder case. Under a new federal law, a criminal who caused the death of an innocent victim during a bank heist was subject to capital punishment.

At his trial, Chebatoris’ defense attorney argued that his client was innocent of murder, claiming that it was possible that the fatal bullet that struck Porter may have been fired by Dr. Hardy. But evidence and eyewitness testimony disproved that theory, and a jury found Chebatoris guilty and sentenced him to death.

Michigan law did not allow for capital punishment, and Governor Frank Murphy appealed the case all the way to President Franklin D. Roosevelt, asking him to overrule the federal penalty and commute Chebatoris’ sentence to life in prison. Neither the president nor the United States Attorney General were swayed, and on July 8, 1938, the same Midland County Sheriff Iris Smith, who had arrested Anthony Chebatoris on the day of the bank robbery. pulled the lever on the trapdoor of the gallows and Chebatoris went down in history as the first person to be executed under the federal bank robbery law, and the only criminal in Michigan ever to be legally hanged.

Time is running out to take advantage of my free offer for a box set of the first three e-books in my Big Lake series small town mystery series. You can’t beat FREE, right? This is a limited time offer and ends on Wednesday, so get yours while you can, and tell your friends about it too! You can order it at this link https://amzn.to/3aRdQ1N 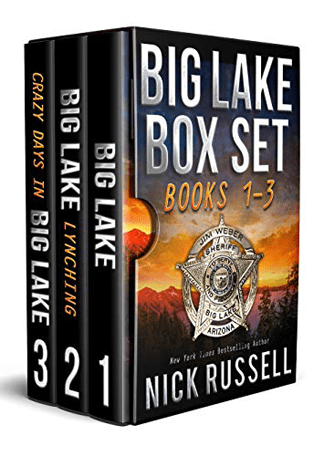 Thought For The Day – Do you ever get up in the morning, look in the mirror and think, “That can’t be right.”