Traveling down Claremont Road in Carlisle, Pennsylvania, one could easily miss the small cemetery with its rows of uniform white headstones on the grounds of the Army’s Carlisle Barracks, and if you did notice, how many of us would know the tragic story these grave markers tell? For these are not the graves of soldiers who fell gallantly in combat, or veterans whose brave service earned them an honored final resting place.

The stark white gravestones bear the names of children, 186 American Indian children, who were torn from their families and their culture and transported across the country in the government’s great experiment to destroy the Indian culture and turn Native American children into Anglos. These graves are all that remain of the old Carlisle Indian Industrial School. 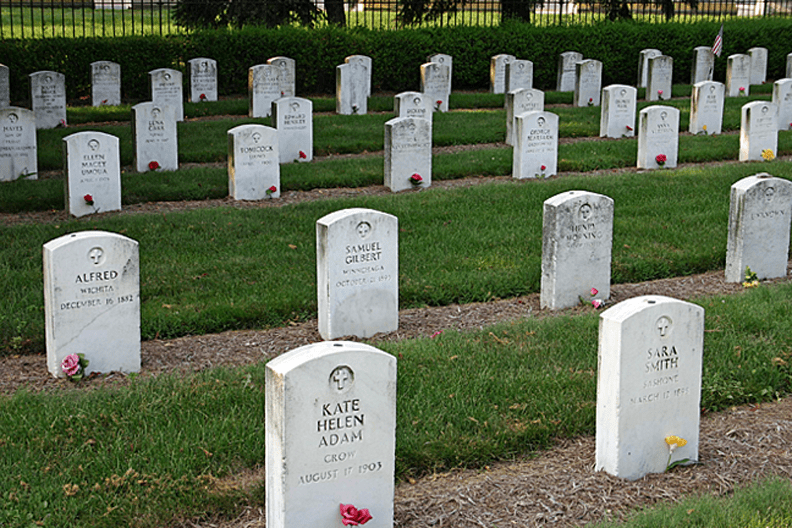 Located on an old cavalry fort, the Carlisle school was founded by a U.S. Army captain named Richard Henry Pratt, whose goal was the total assimilation of Native American children into the White man’s culture. Pratt, who had commanded a prisoner-of-war camp for Indian captives in Florida, and later a unit of African-American soldiers and Indian scouts in Dakota Territory, was vocal in his belief that it was necessary “to first kill the Indian to save the man.”

To achieve this goal, Indian children from tribes all over the nation were taken from their families and brought to Carlisle, which would become the first of a network of Indian schools around the country. Once they arrived, the children were quickly stripped of their Indian identity and any vestiges of their culture. They were given Anglo names, dressed in the clothing White men wore, their braids were cut off, they were forced to attend White church services, and forbidden to speak their native languages. Harsh punishment awaited any child who dared to utter an Indian word or in any way exhibited any sign of his or her true heritage.

The first Indian children to arrive at Carlisle, 82 children from the Lakota people, known to Whites as the Sioux, were delivered by a train from Dakota Territory on a cold October night in 1879. This was just a few years after George Armstrong Custer led his 7th Cavalry into a massacre at the Little Bighorn, and as the hungry, tired children shuffled onto the station platform they were greeted by a sideshow atmosphere as hundreds of local residents came to see these “wild Indians” they had heard so much about. Typical of any government operation, neither food nor bunks were available for the new arrivals. Marched inside their barracks, the children slept on the floor, their empty stomachs only adding to their misery.

Indoctrination was swift at Carlisle, and it must have been a confusing and traumatic experience for these poor children to be suddenly transported into a world so alien from all that they knew. There was no time for acclimation; they were immediately immersed into a curriculum designed to change their very existence and completely erase their past.

Half of the students’ days were spent learning English, writing, and arithmetic, and during the other half, boys were taught mechanical skills such as blacksmithing, carpentry, and agriculture; girls were introduced to domestic duties such as cooking, laundry, sewing, and housework. English was the only language the Indian children heard or were allowed to use. Boys were dressed in military uniforms, and girls were given dresses typical of White girls. During the summer months, the students were housed with White families to further destroy their ties to home and tribe. Teachers and the headmaster, Henry Pratt, drilled into the children’s heads the need to seek employment in the White man’s world and to build new lives for themselves far away from their homes and families.

Records show how the program affected the children’s thinking. Early on, they drew images of things they knew from home – warriors on horseback and buffalo hunts. Over time, drawings of farms and children dressed in White clothing began to reflect their new lives.

The best-known student from Carlisle was Jim Thorpe, the legendary Indian athlete who is still remembered and worshiped in Carlisle. However, to most of the townspeople, the great majority of the students were considered nothing more than a curiosity and an occasional inconvenience when they would try to run away and make their way home. These flights to freedom never lasted long, and punishment was swift and sure, including being held in solitary confinement for up to a week in the fort’s old stone powder magazine.

Carlisle and the other Indian schools showed some signs of success, as measured by the government, and from 1879 to 1918, approximately 12,000 Indian children from 140 tribes, from Puerto Rico, and even the Philippines, attended the Carlisle Indian Industrial School.

A number of children died while at Carlisle, usually of common childhood diseases and tuberculosis, though it is not hard to believe that broken hearts may have taken their toll. Even the strongest man would find it difficult to summon the will to go on when ripped from home and family and deposited into such a strange new world. Some of the deceased students were returned to their reservations and families, but others who came from too far away were buried in a small cemetery set aside for the Indian children. Today those graves are the only tangible reminder of the shameful experiment that took place here.

For Native Americans, Carlisle’s legacy continues to affect their lives and cultural identity. Most Native Americans living in America today have some link to Carlisle or one of the boarding schools it spawned. While some say it may have done some good in preparing Indian children for a world that was rapidly changing around them, most agree that the benefits are greatly overshadowed by the harsh way much of the Indian culture was erased from so many.

The rising costs of operating Carlisle, a preference for schools closer to Indian reservations, and the government’s focus on World War I led to the closing of the Carlisle Indian Industrial School in September, 1918. After the school closed, the property reverted to the United States Army, and today Carlisle Barracks is an advanced training center for military officers. All that remains today of the old Indian School are these lonely headstones and a sign that gives a brief history of the school. It seems too small a reminder of the great tragedy that took place here.

Thought For The Day – Sometimes I wonder if my brain’s hard drive is full.

4 Responses to “The Shameful Experiment”