Ever since we started traveling this wonderful country of ours, a trip to the National Air Force Museum at Wright-Patterson Air Force Base in Dayton, Ohio had been on our bucket list. When we did go there, it was everything we expected, and more!

The Air Force Museum houses what must be one of the finest collections of military aircraft and flying related equipment to be found anywhere in the world. 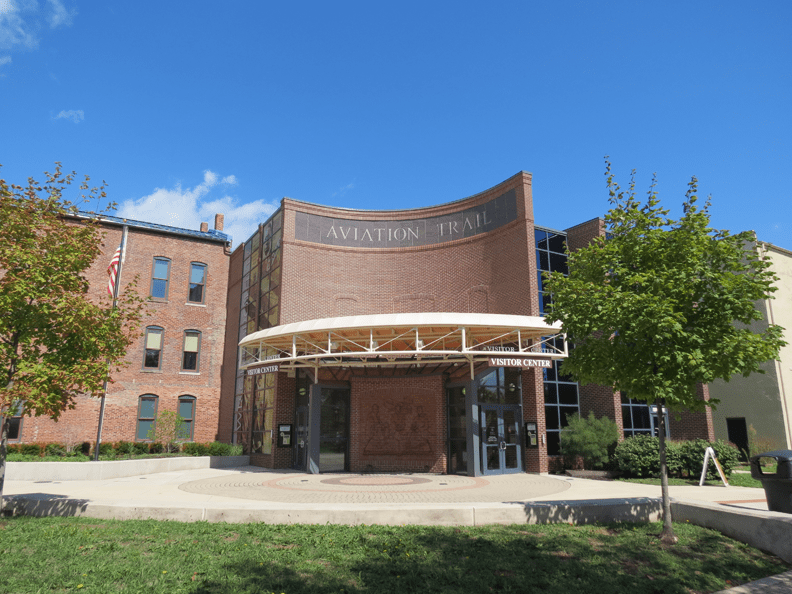 The museum is divided into several galleries that cover everything from the early days of military aviation, World Wars I and II, the National Aviation Hall of Fame, Korea and Vietnam, the Cold War, and the Missile and Space Gallery.

There were airplanes everywhere! Sitting on the floor, hanging suspended from the ceiling; biplanes, tri-planes, single and multi-engine planes, and helicopters. And not just airplanes – there are also gliders, rockets, even a display that depicts early observation balloons. If it flies, they have it here! 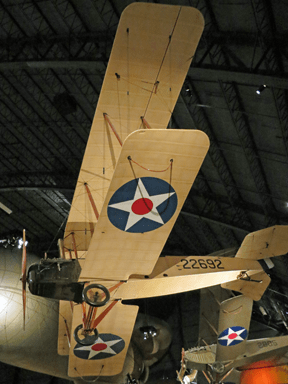 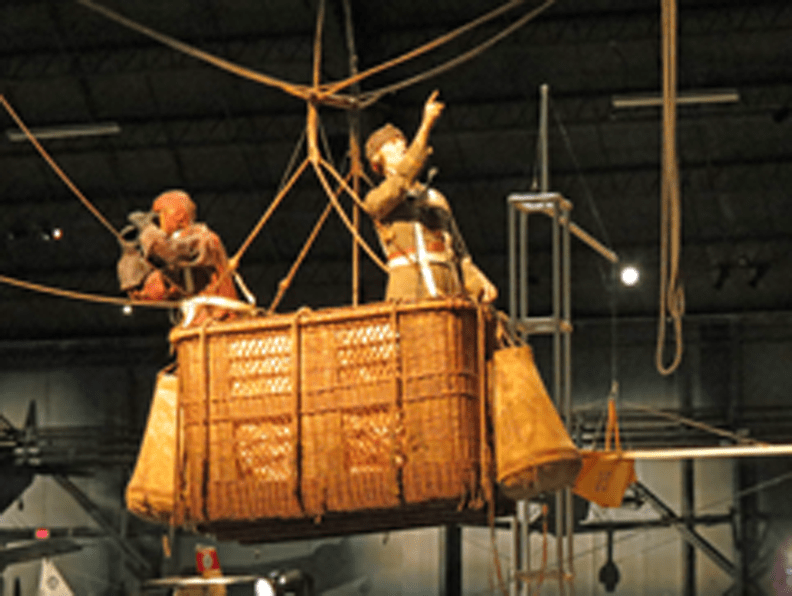 This is a World War I Italian Caproni CA.36, a three engine bomber that was armed with two Revelli 6.5mm machine guns and carried 1,744 pounds of bombs. Capable of a top speed of 87 miles per hour, with a range of 372 miles, the CA.36 was an aircraft ahead of its time. 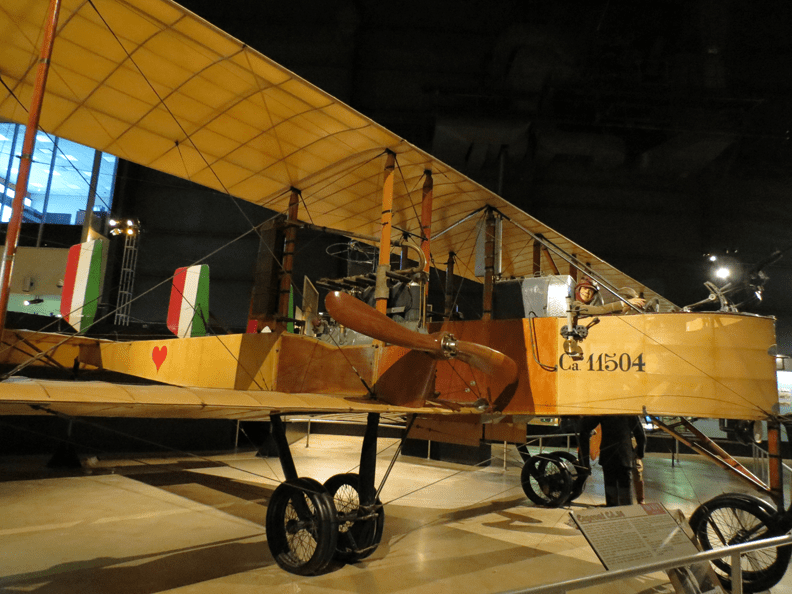 Besides the many airplanes, there is an amazing collection of historical aviation artifacts. We saw everything from experimental weapons to pilots’ helmets and parachutes, to a scrap of fabric from the wreckage of Manfred Albrecht Freiherr von Richthofen, Germany’s fabled Red Baron of World War I fame.

There were also displays on escape and evasion tactics used by pilots shot down over hostile territory and on the experience of prisoners of war who were captured by the enemy.

One interesting item on display was a reproduction of a Kettering Aerial Torpedo, a once top secret missile nicknamed the Bug. Launched from a four-wheeled dolly that ran down a portable track, a system of pneumatic and electrical controls stabilized it in flight and guided it to its target. At a predetermined time, the engine shut off, the wings were released, and it plunged to the ground to deliver its 180 pounds of explosives. Built in Dayton in the latter days of World War I, fewer than fifty were manufactured. While the Bug never saw combat, it was the predecessor of today’s missile technology.

This P–40E is painted in the colors of the famous Flying Tigers, who fought in China. The best fighter in the United States’ arsenal when World War II started, P-40s were flown in every theater of the war from Alaska’s Aleutian Islands to Pearl Harbor and the Philippines and North Africa. They were also assigned to the 99th Fighter Squadron, better known as the Tuskegee Airmen, America’s first African-American pilots. They earned a reputation for their extreme ruggedness and ability to withstand incredible damage and keep flying. 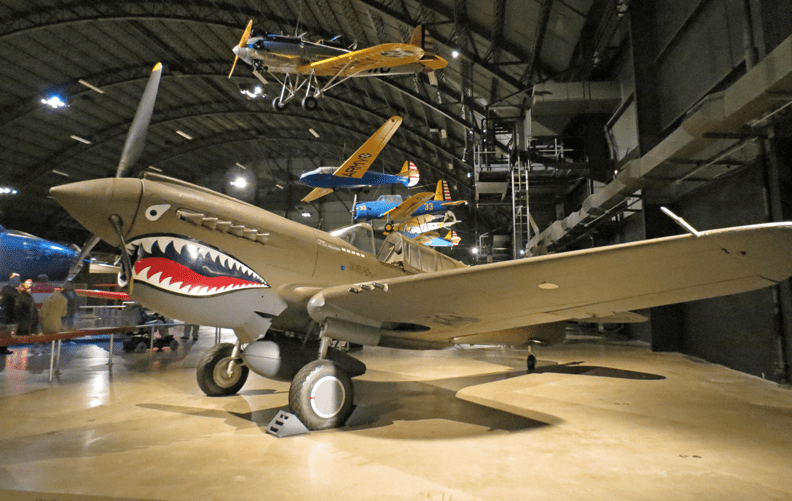 Some of the displays show what life was like behind the lines, as in this exhibit where a cadet pilot tries to explain to his instructor how he turned his aircraft up onto its nose when he applied the brakes too hard when taxiing. An average of 40 percent of cadet pilots washed out of flight school during World War II. 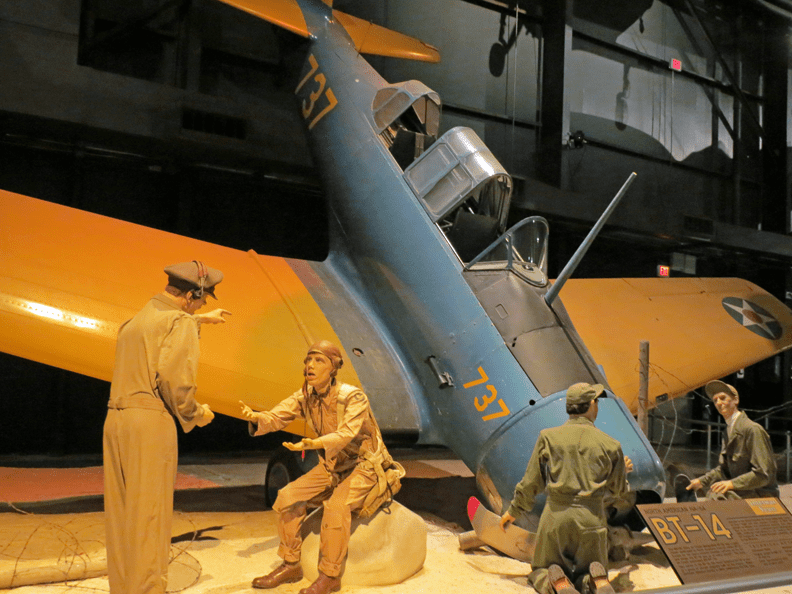 Another very interesting airplane on display is the Bockscar, the famous B-29 bomber that dropped the Fat Man atomic bomb on Nagasaki, Japan on August 9, 1945, which led to Japan’s unconditional surrender five days later, and the end of World War II.

This is an aircraft I’m very familiar with, a Vietnam War era Huey helicopter. They were workhorses in Vietnam, carrying troops, flying medevac missions, and serving as heavily armed gunships to support troops on the ground. This particular helicopter served with the 20th Special Operations Squadron flying dangerous, highly classified missions inserting covert troops into Laos and Cambodia. 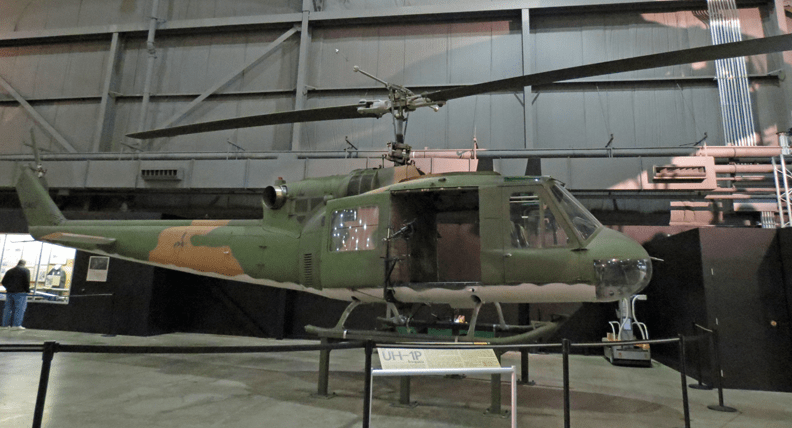 Another Vietnam-era helicopter on display is this HH-43B Huskie, which was used for rescuing downed aircrewmen and flight line firefighting. A Huskie on rescue alert duty could be airborne in approximately one minute. 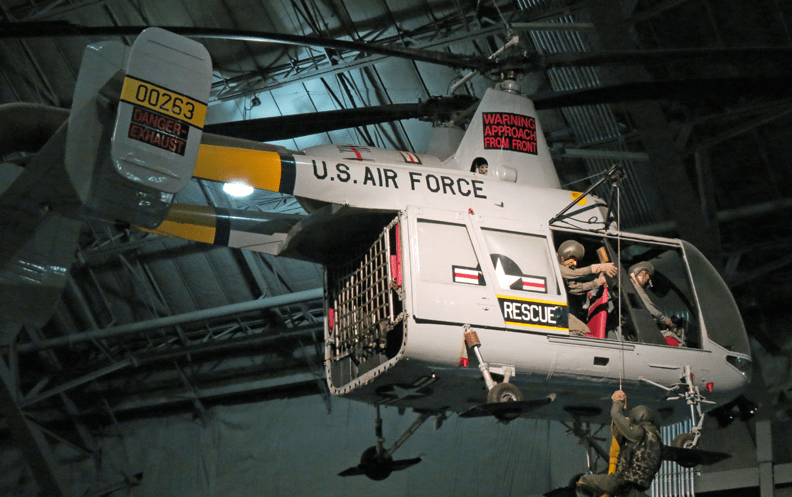 Standing on the floor and looking up in the Missile and Space Gallery was certainly impressive, with all of the massive rockets on display. 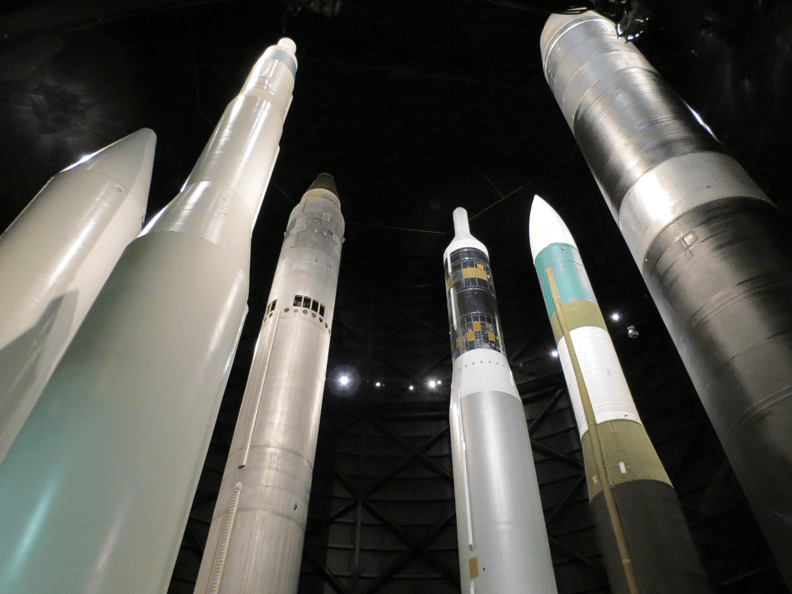 This is the Endeavour command module from the 1971 Apollo 15 mission to the moon. After fourteen days in outer space, it splashed down in the Pacific Ocean on August 7, 1971. 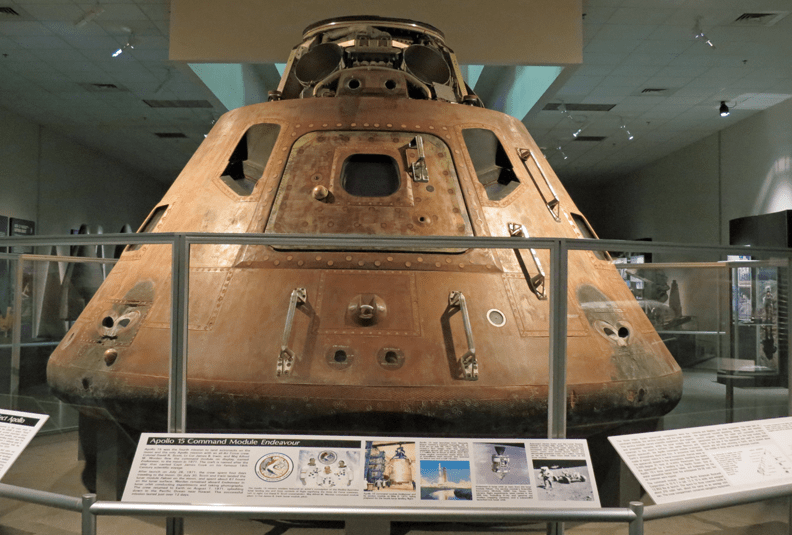 The museum also has an extensive gift shop, an IMAX theater, and visitors can arrange a guided tour of several Presidential aircraft housed on the main base. Government approved identification is required for the tour.

Parked outside the museum building, this Lockheed C–141 Starlifter, nicknamed the Hanoi Taxi, brought the first American Vietnam War POWs back to freedom from Hanoi in 1973. Forty brave prisoners showed no emotion to their former captors as they waited stoically for the airplane to land and quietly boarded it. Not until the wheels left the runways did the freed Americans erupt in cheers of joy that filled the aircraft.

In May, 2004, the same airplane flew back to Hanoi under the command of Major General Edward J. Mechenbier, himself a former POW, to repatriate the remains of two American servicemen killed in action during the war.

Plan a full day when you visit the Air Force Museum, and even then you probably won’t be able to see it all because it’s so big. The entrance to the museum is on Springfield Street at historic Wright Field (Gate 28B), Wright-Patterson Air Force Base, six miles northeast of Dayton, Ohio, with easy access from Interstates 75 and 70.

The museum is open from 9 a.m. to 5 p.m. seven days a week and is closed on Thanksgiving, Christmas, and New Year’s Day. Admission and parking are free. There is free parking available for large vehicles like buses and RVs. The entire museum complex is handicapped accessible, and a limited number of wheelchairs and motorized carts are available for use free of charge on a first-come, first-served basis. For more information, call (937) 255-3286 or visit the museum’s website at www.nationalmuseum.af.mil.

Thought For The Day – I am so thankful I didn’t end up with what I thought I wanted.