It’s always a thrill to see a rocket lifting off from Cape Canaveral but we have lived here long enough that we don’t always keep track of when the launches are scheduled. I knew that there was one planned for sometime this week that had been delayed earlier because of weather, but it wasn’t until I heard the rumble of the booster rocket as it made its reentry. that I realized it had happened.

As I’ve said before, we can see the rockets taking off from our yard or our dock, but there’s no way except on television to watch the boosters when they land on a ship out in the Atlantic Ocean. 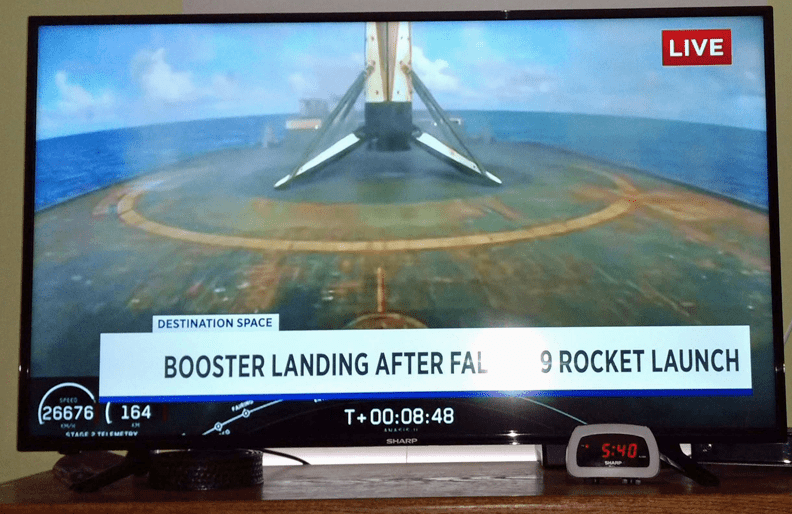 It amazes me that they can send something so high into the air and come back and land so precisely. Heck, half the time I get lost just going to the post office! This was a Falcon 9 rocket, sending satellites into outer space. I think someone said one of the satellites was for the South Korean military, but I’m not sure about that.

We have all heard the term rocket scientists, and obviously, we have a lot of them working just south of us at the Kennedy Space Center, but here is someone who is not a rocket scientist. In fact, he’s an idiot. On the news last night, Missouri Governor Mike Parsons was talking about sending kids back to school. And because I think some people wouldn’t believe it unless they actually saw it, here are his words on the screen. He is acknowledging that sending children back to school is going to result in them getting COVID-19. So why the hell are they sending kids back to school? This idiot doesn’t seem to realize that he has now opened his state to lawsuits from the parents of those kids who do get the virus at school and then come home and give to their rest of their families. 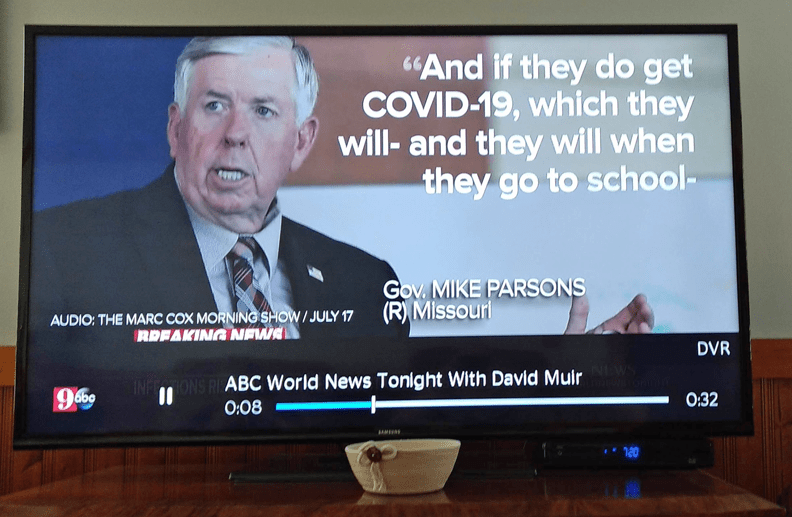 I wish I could say that Ron DeSantis, our governor here in Florida, is any better, but he’s just as much an idiot. He is still insisting that the virus is going to just magically disappear sometime. Gee, I wonder where he got that idea from.

And speaking of idiots, these flyers are appearing around our county. If you’ve never heard of them, the Proud Boys are a hate group. It’s sad to think that in this day and age clowns, like this still exist. But this is what happens when cousins marry and have children. 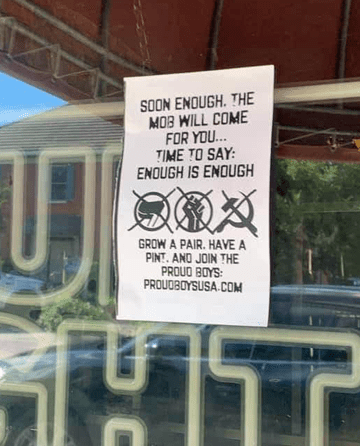 While waiting for my last proofreader to finish the first book in my Tinder Street family saga, I was busy working on the second book in the series yesterday. I knocked out about 6,000 words, which puts me somewhere over 16,000 words so far in this book, and the words are flowing out just as easily as they did for the first one.

In other news, apparently, the letters from my doctors worked, because I got an email yesterday from the Clerk of Courts for Volusia County saying that I’ve been permanently excused from jury duty. Someone asked me if I didn’t feel at least a little bit guilty that I didn’t want to do my duty as a citizen. When I was a teenager, I volunteered for the Army during the Vietnam War and volunteered to go over there, leaving home the day after high school. In civilian life, I’ve served as a Town Councilman and a member of the Planning and Zoning Commission in my town, I helped organize and was on the board of directors of our battered women’s shelter, and served in other volunteer positions for communities where I lived. So no, I feel no guilt whatsoever. I’ve done my part.

Today is a road trip day for us. We have to go up to the Mayo Clinic in Jacksonville for a follow-up from Terry’s Interstim implant that was done late last year. There are supposed to be isolated thunderstorms during the day, but hopefully, we will get up there and back without any difficulties.

Thought For The Day – A person cannot be reasoned out of a position they did not use reason to arrive at.

10 Responses to “Rockets And Idiots”