Benjamin Franklin Stone was a young man born into poverty. Part African-American and part Irish, he was born in 1874 to a society that considered him an outcast. As a young boy, Ben and his older brother Tom were placed in an orphanage in Toledo, Ohio. Though conditions at the orphanage were far from perfect, it was a refuge from the cold and hunger they had known for so long.

When Ben was ten years old, the brothers were taken from the orphanage by a farmer named William Dunipace and put to work on his place outside of Lucky, Ohio, a few miles south of Toledo. Apparently, farm life didn’t suit his brother Tom, who soon left and went back to Toledo. But Ben and Dunipace seem to have a bond, and the young boy stayed with him for 22 years. Working side-by-side on the farm, it was said that Dunipace considered Ben to be like a son to him. When he died, his will called for Ben to inherit 80 acres of prime farmland and the farmhouse. 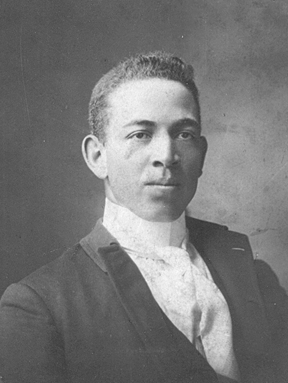 Not really suited to farming even though he had done it for so much of his life, Ben soon sold off half of the land, living in the house on the remaining 40 acres. He tried to farm the remaining land but was only moderately successful at it.

At one time, Ben purchased a motorcycle, which he loved to ride at top speed on the narrow country roads. He loved that motorcycle and kept it inside his house so no one would steal it and it would not be harmed by bad weather.

Ben was an amazing shot with a handgun, and old-timers recall seeing him ride down a road on his motorcycle at high speed, shooting bottles and tin cans off of the tops of fenceposts, sometimes switching hands to get bottles on the other side. In a newspaper article about his life, somebody recalled watching him hit the head of a nail four times in a row with a handgun.

Eventually selling off the rest of his land, Ben worked part-time for farmers around Lucky for a while. His needs were few, so he never worked steady, but it is said that when he was on the job, he never slacked off for a moment.

Ben was a popular man in the community for his easy-going ways. Some considered him a simpleton because he never had a lot to say and always dressed in old bib overalls, but Ben always took the ribbing good-naturedly.

Whenever he needed to make make a dollar or two, Ben always found work. Once, he was helping deliver two iron burial vaults to the local cemetery. He was riding in the back of the truck when the driver took the turn into the cemetery entrance too sharply, and one of the vaults hit a post at the entrance to the cemetery, knocking it and Ben off the back of the truck. In the process, the vault struck Ben in the head and knocked one of his eyes out. In spite of what must have been horrific pain, he got up and was ready to go about the rest of his day nonchalantly, as if nothing happened. He was given a glass eye after the accident but seldom wore it, because he said there was no need for it, and it didn’t help him see any better.

In 1925, at the age of 51, Ben moved into town and took a job as a night watchman for the W. H. Swan furniture store. The owner took a liking to the mild-mannered man and let him sleep on a pallet in a back room. Ben seemed quite content with that and didn’t want anything more out of life.

Honest to a fault, other store owners also asked Ben to check on their property at night, and before long, he was the official town watchman. It is said that nothing was ever stolen or disturbed when he was on duty. Ben would patrol the town at night, a .45 revolver stuck in the pocket of his overalls, a double-barreled shotgun in the crook of one arm, and a flashlight in his other hand. More than one person who was up to small-town mischief reported that if Ben put his flashlight on you, you could bet his shotgun was pointed at you, too. Knowing that, there was never any trouble from the local ne’er do wells.

But the 1930s came along and it seemed like trouble was everywhere. It was the days of the Great Depression and the age of the gangster. Armed gangs roamed the country, robbing banks and any other likely target they could find. On September 28, 1933, a window washer noticed a suspicious car parked in front of the bank in Lucky. At the same time, someone noticed a man wearing a heavy hunting coat approaching the bank, one hand in his pocket.

Having been on duty the night before, Ben was asleep in the back room of the furniture store when someone came and woke him to report the suspicious activity. Arming himself with a .45 revolver and his shotgun, Ben went out the back of the furniture store and down an alley, approaching the bank from a side street, where he took up a position to intercept the bank robbers. At that time a man later identified as Glenn Saunders came out the door with $334 of the bank’s money in his pocket. Seeing Ben, he fired twice, hitting him in the legs.

Standing his ground in spite of his injuries, Ben fired one barrel of the shotgun, knocking the robber off his feet. When Saunders started to get up again, Ben gave him the second barrel, then he pulled his .45 from his pocket and pumped three bullets into the outlaw. Turning toward the getaway car as its driver fled, Ben was frustrated that he was not able to chase him down, but bystanders insisted on taking him to the hospital in Toledo.

Based on eyewitness accounts, a man named John Lora from Toledo was identified as the getaway driver. Detectives learned that Lora was the brother-in-law of the dead bank robber. He was arrested, along with his brother Edward, and confessed to another earlier bank robbery. While awaiting trial, Lora escaped by fashioning a dummy out of blankets and pillows on the cot in his cell and slipping out of jail. He was recaptured and received a sentence of life in prison.

It was reported that when he was taken to the hospital after the shootout, a doctor told Ben they were going to have to give him a shot before taking him upstairs for surgery and asked if he was all right with that. Ben replied that if it didn’t hurt more than a .32 bullet, he guessed that was okay.

Before long, he was back on the job, and the town of Lucky wanted to honor Ben for his heroism. They held a luncheon in his honor, where he was presented with a check for $150, and a gold badge with his name engraved on it, naming him the official town marshal. Ben thanked the businessman holding the luncheon but told them that really wasn’t necessary.

One strange outcome of the shooting was that the mother of Glenn Saunders, the man Ben had killed, wrote him a letter, thanking him for doing what he did. She said she and her husband had always known their son was out of control and that it was only a matter of time before he did something terrible. At least now they knew where he was, and that he couldn’t harm anyone else. Mrs. Saunders and Ben became penpals, writing back and forth for many years, even exchanging Christmas gifts.

Ben Stone continued to serve as Lucky’s Town Marshal for many years, though the bank robbery was the only time he ever fired a gun on duty. He continued to be a popular figure in Lucky until his death from a heart attack on August 27, 1943, at the age of 69. As he had requested, he was cremated and buried in the Webster Township Cemetery. It is said his funeral was one of the most attended events in the town’s history.

Thought For The Day – Don’t judge someone just because they sin differently than you do.

One Response to “Ben Stone, An Unlikely Hero”