50,000 years ago, a brilliant fireball streaked across the sky at 40,000 miles per hour and slammed into the earth’s surface with an explosive force greater than twenty million tons of TNT. The iron-nickel meteorite’s impact was so great that it created a massive 700-foot deep crater measuring over 4,000 feet across. Hundreds of tons of rocks and debris were flung into the air by the impact, raining down on the surrounding countryside for miles around. The shockwave created by the meteorite’s impact was felt for hundreds of miles. 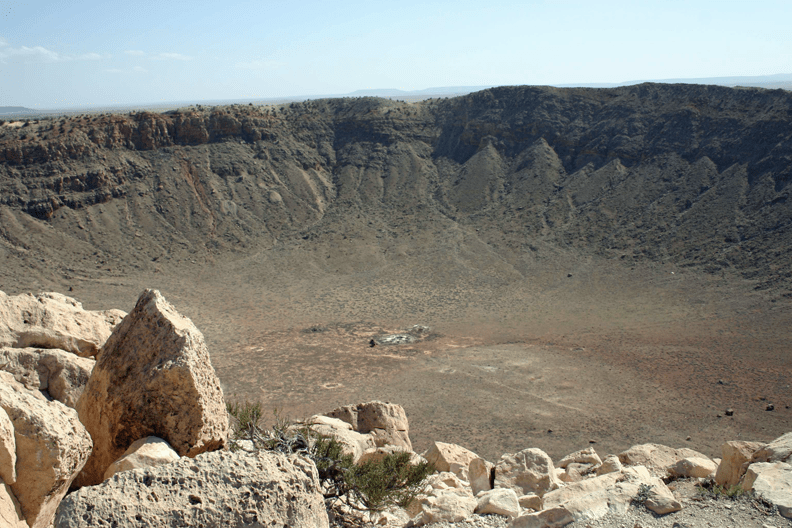 Today thousands of travelers on busy Interstate 40 in northern Arizona pass by the scene of this ancient event every day and never realize how historic and scientifically unique this place is.

Early Indians from the region knew of the crater, and when White settlers came into the area, they believed it was the remnant of an extinct volcano. In 1886, a sheepherder found iron-nickel meteorites in the area, but believing them to be silver, he did not report his findings.

In 1902, a Philadelphia mining engineer named Daniel Moreau Barringer visited the crater and was convinced that it had been formed by the impact of a large iron meteorite, which he assumed was buried beneath the crater floor. Barringer formed the Standard Iron Company and filed mining claims to the crater.

For the next 26 years, Barringer dug shaft after shaft in the crater, seeking the meteorite, without success. Finally, in 1929, he gave up his quest to find the giant meteorite. He died a few months later, a broken man.

In 1941, Barringer’s family leased the crater to the Bar T Bar Ranch Company, a cattle operation that owns or leases most of the land surrounding the crater. In 1955, the owners of the Bar T Bar Ranch formed a separate corporation, Meteor Crater Enterprises, Inc. They entered into a long-term lease with the Barringer family to develop the site as both a tourist attraction and a scientific study area.

Most craters on earth have been leveled by erosion. Over time, nature has also impacted Meteor Crater with inevitable erosion by wind, water, and heat, though the crater’s shape has changed relatively little since its formation 50,000 years ago. The crater walls have been slightly modified by erosion and, in places, still exhibit some original fallout from the debris cloud. The rim crest has been lowered by erosion but still stands some 150 feet above the surrounding plateau. The majority of the debris blanket is still present. Although there are many larger terrestrial impact sites, Meteor Crater is the first proven and best-preserved impact site on earth.

Today Meteor Crater offers visitors an enjoyable educational experience and the opportunity to learn more about our planet’s history and geology. The Visitor Center includes a museum with exhibits on meteor impacts and collisions in our solar system, a process that continues still today and will for eons into the future.

Every day over 1,000 tons of meteorite materials fall to earth, most going unnoticed as they land in remote areas or at sea. Most are small enough that they are slowed by the atmosphere and drop harmlessly to earth. But occasionally, large meteorites make it to earth, causing craters and damage. In 1982, a six-pound meteorite tore through the roof of a house in Wethersfield, Connecticut, bounced off the living room floor, ricocheted off the ceiling, and came to rest under the dining room table, shocking the family who was watching television in the room at the time.

Incredibly, this was not the first time a meteorite struck a house in the small town! In 1971, a half-pound meteorite came through the roof of a home and lodged in the ceiling while the occupants were asleep. They were not aware of it until the next morning when they saw the black rock sticking out of their ceiling. The two houses were located less than two miles away from each other.

In 1992, thousands of people saw a fireball caused by a 27-pound meteorite streaking across the sky, before it landed in Peekskill, New York, slamming into a Chevrolet Malibu. Nobody was injured in the impact, but the car was heavily damaged.

The only documented case of a person being injured by a meteorite took place in Sylacauga, Alabama, in 1954. That is when an 8½ pound meteorite tore through the ceiling of a home and struck the woman who lived in the house in the hip as she slept on her couch.

By comparison, the meteorite that formed Meteor Crater is estimated to have been 150 feet in diameter and weighing several hundred thousand pounds. Scientists say that if such a meteorite were to land on earth today, the results could be catastrophic. The impact would cause a substantial initial blast, followed by tsunamis, wildfires, prolonged darkness, and atmospheric effects such as increased cooling or warming.

The Meteor Crater Interactive Learning Center features 24 exciting exhibits, making it the most extensive and informative museum of its type in the world. The Learning Center also includes two interactive computer displays that contain information and high-tech graphics on space, meteorites and asteroids, the solar system, and the Shoemaker-Levy 9 comet that impacted Jupiter.

Many specimens of meteorites are on display for visitors to view and touch, including a 1,400-pound fragment from the meteorite that formed the crater, the largest ever found in the region. 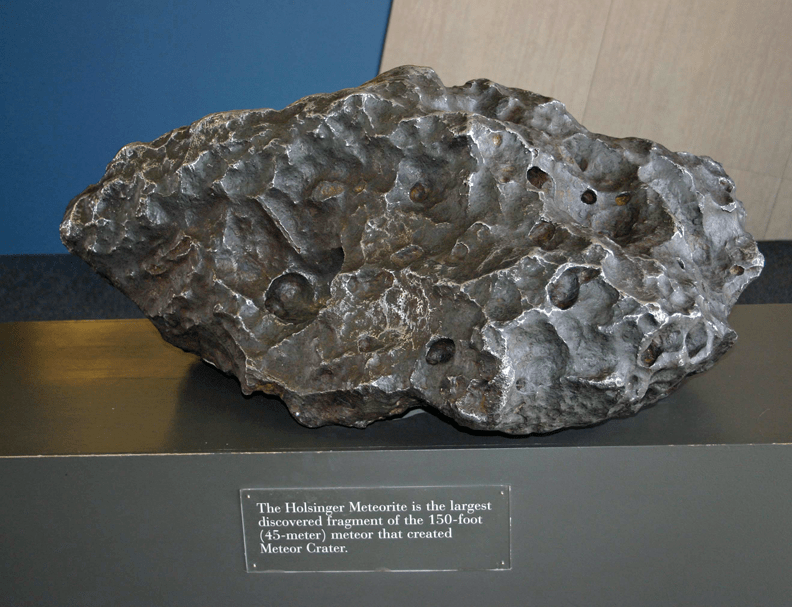 An 80 seat, widescreen theater shows a video titled Collisions and Impacts throughout the day that explains meteors and meteorites and their role in science.

Outside, there are four observation areas behind the Learning Center, where visitors can view the crater from inside the rim. Although Meteor Crater today is over 4,000 feet across and 550 feet deep, observation telescopes give visitors a close up look at points of interest in the crater. The sheer size of Meteor Crater is not comprehendible until you stand on the rim and look down into the hole itself. 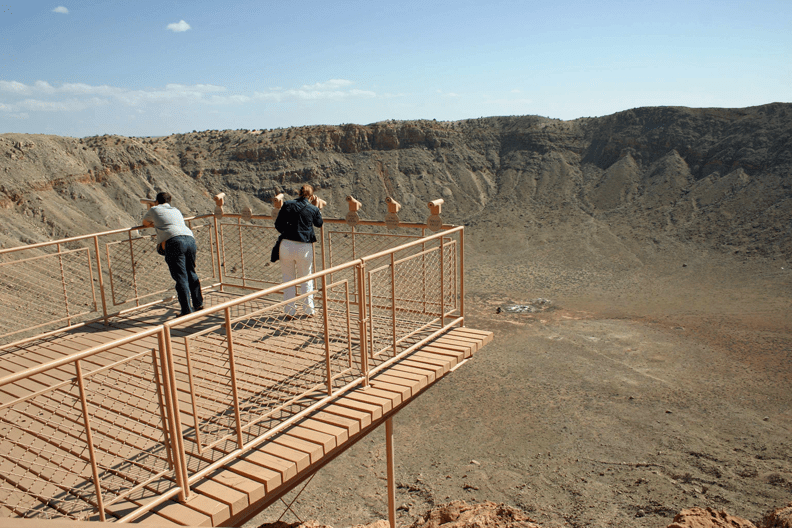 Daily guided rim tours take visitors 1/3 mile around the crater rim. The tours leave hourly from 9:15 a.m. until 2:15 p.m. and last about one hour, weather permitting. Because the terrain is rough, proper hiking shoes are required for the tour.

From 1963 to 1970, astronauts trained at Meteor Crater for Apollo missions to the moon, and today the Astronaut Memorial Park features the names of America’s astronauts displayed on a Wall of Fame. An Apollo space capsule is on display in the outdoor park. 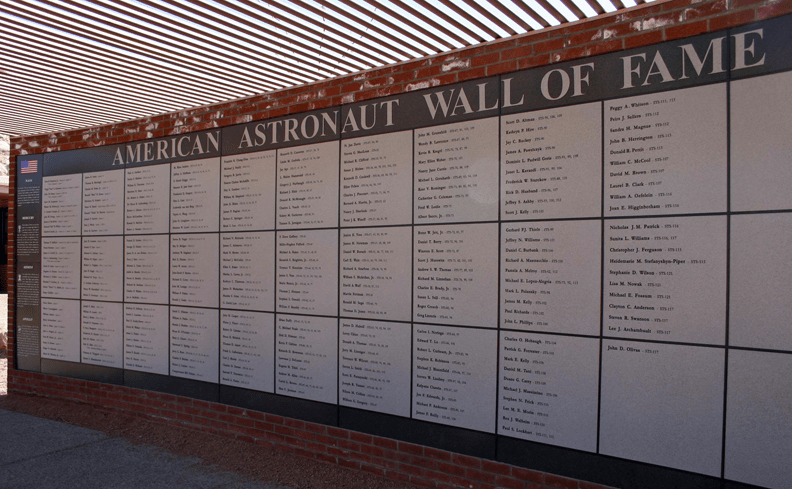 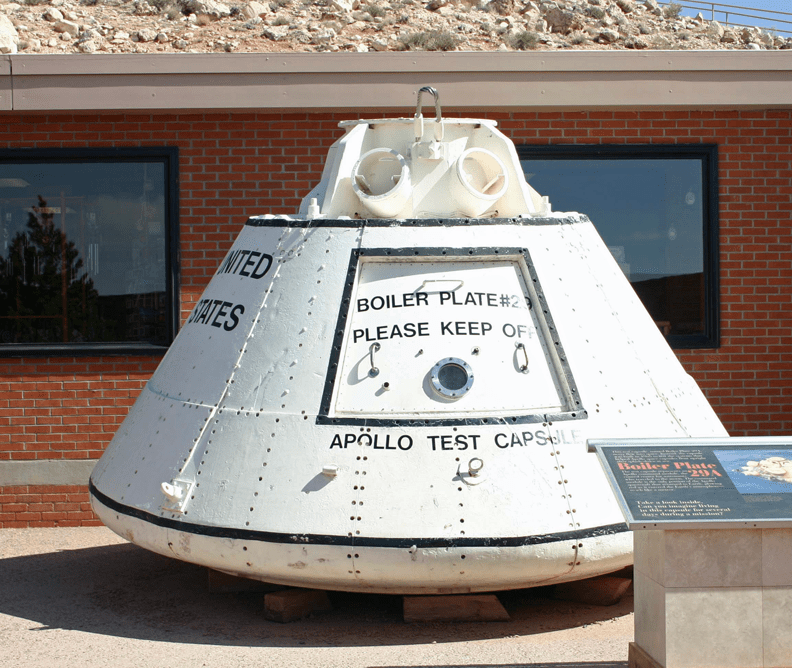 At the base of the hill leading up to the crater, Meteor Crater RV Park features 71 pull-through spaces. The park has private individual restroom and shower facilities, including two designated handicap accessible restroom/showers. The park also includes a recreation room, playground, laundry, country store, and a gas station.

The RV park makes an excellent base for exploring not only Meteor Crater, but also other northern Arizona points of interest, including Flagstaff, Route 66, the Grand Canyon, Sedona, Walnut Canyon, and Winslow. 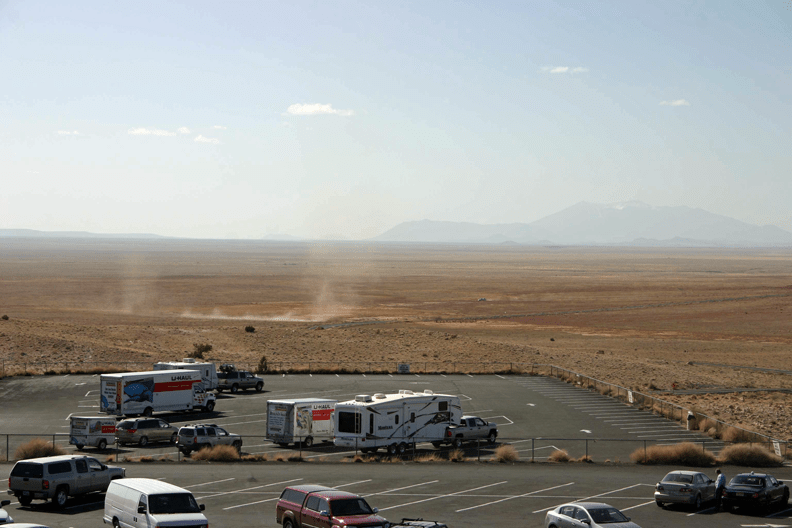 Thought For The Day – Non-alcohol beer is for people who don’t want to get drunk but do like to pee.