My dad used to always say that some people are so cheap that if you were selling $100 bills for five bucks, they would ask for a discount. I thought that was funny as a kid, but when I grew up and started running my own businesses, I found out that it was all too true.

Many times when we had a vendor booth at an RV rally, giving away sample copies to our Gypsy Journal RV travel newspaper to people and trying to sell them a subscription, someone would ask for a discount because they were on a fixed income. More often than not, these people were driving expensive motorhomes, and the women were wearing all kinds of jewelry, but they felt that our $15 or $20 a year was way too expensive for their budget. My response to the fixed income thing was to tell them that I wished someone would fix my income because it was broken, and no matter what I did, it never made it to the end of the month.

But RVers are not the only cheapskates, not by a longshot. Just like with some RVers, I sometimes found that people with plenty of money did everything they could to not part with it. I guess that’s why they have plenty of money, right?

I was about 25 years old when I started my first newspaper in Grays Harbor, Washington back in the 1970s, and at that time, a classified ad was two dollars for up to 20 words and then $.10 a word after that. Compared to the other newspaper in the county, that was a heck of a bargain. But, as I said, there is always somebody who wants a better deal. We had a gentleman in town who was buying and selling cars and boats, and making a nice profit on each transaction. He wasn’t technically in business because he didn’t have a license or a place of business he sold from, he just did it from his home. This guy did very well, he always drove a new sports car or was riding a nice motorcycle. He wore almost as many gold chains as Mr. T, and a diamond and sapphire pinky ring that probably cost more than I made in a couple of months. He was also a very personable fellow that you couldn’t help but like. And believe me, I tried more than once not to like him because he was beyond cheap.

Every week when he came in to put in an ad, or sometimes two, he would keep it at that 20-word minimum because he didn’t want to pay extra. Then he would pull out a $100 bill, knowing that we were a small operation that didn’t keep that much change in the cash register. Then he would say he would catch us next time and be gone. Of course, when he returned the next week, he always swore that he had come back and paid us, which wasn’t true. This went on for a while before the girls at the front desk made me aware of the problem. I told them not to worry about it, just let me know the next time he came in, because I would be prepared.

Sure enough, the next week he was in and placed a $2 ad and pulled the same routine of flashing his $100 bill and saying he didn’t have anything smaller. I told him not to worry about that and snatched the $100 bill out of his hand and put it in my pocket. Then reached under the counter, where I had $98 in rolled pennies waiting, and started stacking them on the counter. That took him aback for a moment and he said that he was on his motorcycle, and there was no way he could carry all of those rolled coins. I told him no problem, his change would be waiting for him when he returned. He didn’t like that much, but he left and was back in just a few minutes in his sports car. Now I don’t know how it happened, and if you asked me, I would probably lie anyway, but somehow in the short time that he was gone, every one of those rolls of pennies split open, and we wound up handing them to him in a large, heavy box. Amazingly enough, whenever he returned after that to place an ad, he always had the right amount of money with him in $1 bills. Go figure.

At the same time and in the same place, I had a salesman by the name of Steve, who was just as cheap. He was also a brownnoser who was always trying to impress me. I would have fired him, but Steve was a damn good salesperson and brought in a lot of business. Every week, just like clockwork, Steve would suggest that we go to lunch and tell me it was his treat. And every week, just like clockwork, when the bill came at the end of our meal, Steve suddenly realized he had forgotten to bring his wallet, and I would end up paying. That happened three or four times until I got fed up.

The next time Steve suggested we go to lunch I was all for it and even suggested we go to one of the fanciest steakhouses in town. We enjoyed our meal, the conversation was great, and wouldn’t you know it? When the waitress brought our bill, Steve suddenly realized he had forgotten his wallet. I told him no problem, I had it handled.

Then I waved the owner of the restaurant, who happened to be my next-door neighbor, and who I may have spoken to before we arrived for lunch, to come over to our table. I told Steve I happened to have his paycheck with me, and that I knew that Johnny, the owner, would be happy to cash it right there, minus the cost of the meal. Steve’s mouth kind of dropped open and he didn’t know what to say as I handed his check to Johnny. It was all I could do to keep from laughing when Johnny returned with his change. No, it wasn’t rolled pennies. Johnny wouldn’t do that. It was rolled nickels and dimes, a whole bunch of rolls of nickels and dimes! For some strange reason, Steve never wanted to go to lunch with me after that. I really don’t know why.

Today is your last chance to enter our Free Drawing for an autographed copy of Baca, the first book in my pal Billy Kring’s excellent Ronny Baca mystery series about a struggling actor and part-time private investigator. Billy isn’t only my friend, he’s also my favorite author, and I bet if you read one of his books, he’ll become yours, too. To enter, click on this Free Drawing link or the tab at the top of this page and enter your name (first and last) in the comments section at the bottom of that page (not this one). Only one entry per person per drawing please, and you must enter with your real name. To prevent spam or multiple entries, the names of cartoon or movie characters are not allowed. The winner will be drawn this evening. 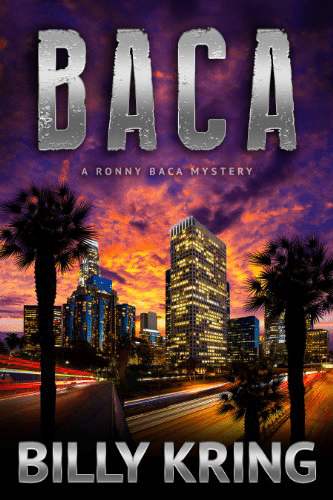 Thought For The Day – You may piss a lot of people off when you start doing what’s best for you.