Some called him the boy soldier, and I guess that’s applicable since he was just a boy, like so many who have answered their country’s call to duty. And like so many of those who did before and after him, he grew up very quickly on the battlefield, his boyhood gone forever. But this boy, a Texas sharecropper’s son, came home as one of the most decorated American soldiers of all time. 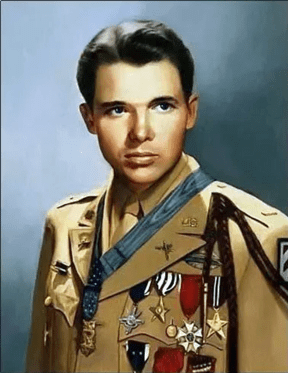 Audie Murphy was born on June 20, 1925, the seventh of twelve children, and life was difficult from the very start. His father abandoned the large family, and the young boy was forced to quit school in the fifth grade to pick cotton for $1 a day to help feed his family. He was sixteen years old when his mother died and three of his siblings were placed in an orphanage. That still left many mouths to feed, and his excellent marksmanship and skill as a hunter was the only reason they had meat for their meals.

When America entered World War II, Audie Murphy tried to enlist in the military but was turned away because he was underweight and underage. With the help of his older sister, he managed to lie about his age and joined the Army just days after his 17th birthday. Though he was a headstrong young man, Murphy embraced military life and won the respect of his fellow soldiers and the officers over him.

His first exposure to combat was during the invasion of Sicily in 1943, followed by the Battle of Anzio and the liberation of Rome, after which his unit took part in the Allied invasion of France. Promoted to sergeant, Murphy’s gallantry and dedication to his fellow GIs was noticed by his superiors.

Wounded three times, each time he asked to rejoin his unit after being released from the hospital. Along the way he was collecting one decoration after another for heroism and was promoted to second lieutenant.

Though he had performed many acts of heroism ever since joining the fight to liberate Europe, Murphy is best known for his deeds on January, 26, 1945. With his company decimated in heavy combat in France’s Vosges Mountains, and with only nineteen men left under him, he ordered his men to take cover in a forest when the Germans attacked, knocking out an M10 tank destroyer and setting it on fire. Staying behind to protect his men, Murphy laid down a withering fire on the advancing enemy from on top of the burning M10. When his carbine ran out of ammunition, he used the M10’s .50 caliber machine gun to keep firing. Wounded again, he held his position for over an hour, killing or wounding over 50 German soldiers before they finally retreated. Then he jumped off the M10 and led his men in a counterattack. With the enemy routed, he refused to leave his men while his injuries were being tended.

Audie Murphy won our country’s highest military award, the Congressional Medal of Honor, for his actions that day and came home a hero celebrated from coast to coast and border to border. Besides the Medal of Honor, he was awarded two Silver Stars for valor, two Bronze Stars for valor, three Purple Hearts for his wounds, and every other award the Army had at that time. Not to mention numerous foreign awards for his heroism, including the French Legion of Honor and French Croix de guerre.

After the war, the young hero went to Hollywood and appeared in a number of movies, mostly Westerns, and starred in the 1955 movie about his wartime experiences, To Hell and Back. He was also a familiar face on television, starring in the TV series Whispering Smith.

But war left emotional scars on Audie Murphy as well as physical scars. Suffering from what today is known as post traumatic stress disorder (PTSD), he slept with a loaded handgun under his pillow, had frequent nightmares, and became addicted to sleeping pills. He repeatedly asked the government for help not only for himself, but for other combat veterans as well, but with little success.

Still wanting to contribute to his country, he joined the Texas Army National Guard and was recalled to active duty during the Korean War. His requests to be sent to a combat unit were denied, and instead he was assigned to help train new recruits. He eventually retired as a major in 1969.

With his acting career over, he also had financial problems and was hounded by the IRS. Even then, Audie Murphy refused numerous offers to appear in advertisements for alcohol and cigarettes, believing that would be a bad example to set for younger people.

Audie Murphy, the boy faced hero who helped turn the tide of battle more than once in the face of overwhelming enemy attacks, was killed in an airplane crash on May 28,1971 near Catawba, Virginia. He is buried at Arlington National Cemetery, and his grave is the second most visited, following only that of President John F. Kennedy.

Today the Audie Murphy/American Cotton Museum in Greenville, Texas honors their hometown hero with displays on Murphy’s life before, during, and after World War II that include a ten foot bronze statue of him out front. 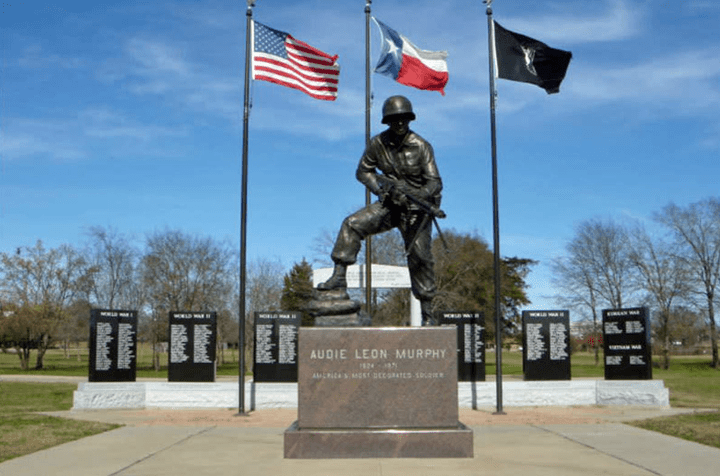 Exhibits inside include a display representing his many military medals and decorations, and of a soldier taking a brief and much needed rest during a break from the fighting. There are also weapons, military uniforms and equipment, movie costumes, paintings, photographs, and posters of or related to Audie Murphy. 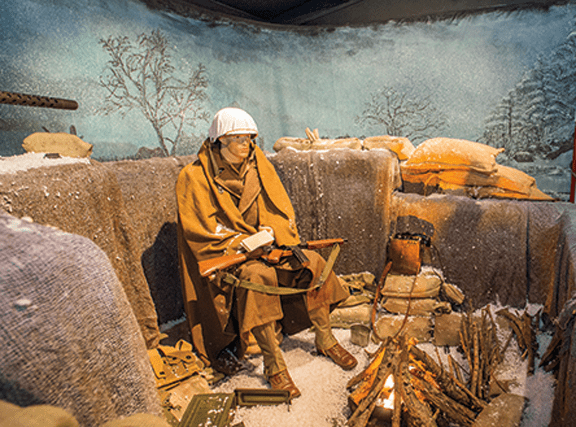 The museum also celebrates the Texas cotton industry’s past, present, and future with a number of displays and educational materials. 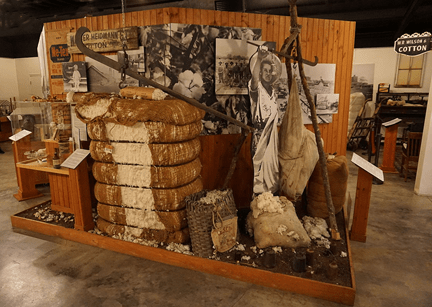 Located at 600 I-30 in Greenville, Texas, forty minutes east of Dallas, the museum is open Tuesday – Saturday from 10 a.m. to 5 p.m., except for major holidays. Admission is $6 for adults, $4 for senior citizens, veterans and college students, $2 for kids ages 6-18 years old, and ages 5 and under are free. For more information, visit the museum’s website at http://www.cottonmuseum.com.

Thought For The Day – A balanced diet means a cupcake in each hand.