Definition of potpourri – 1: a mixture of flowers, herbs, and spices that is usually kept in a jar and used for scent. 2: a miscellaneous collection. The second definition above pretty much describes today’s blog. This is the third in a collection of miscellaneous thoughts and info that I’m sharing because I really don’t have anything else to talk about today.

I need to make a correction to something I said in yesterday’s blog. In answering the question about places to hang out and camp in Arizona before one begins traveling further north, I recommended the Verde Valley, and mentioned that there is camping on BLM land just outside the Verde Valley Thousand Trails preserve. Two blog readers contacted me to let me know that is no longer allowed. Apparently, due to people trashing the place and overstaying the allotted time, that area is now designated for day use only and is closed to camping. I apologize for giving erroneous information.

Because we had no place to go and nothing to do, and because it’s a wise idea to stay home as possible right now, yesterday was another writing day for me. And a good day it was, with over 5,000 words added to my new John Lee Quarrels book. I never know exactly what the final word count will be in any book, but I estimate I’m more than a third of the way toward completion. While I was doing that, Miss Terry made a delicious baked corned beef dinner. From what we know about her genealogy, many of her roots are in Germany, but you would think she was an Irish lass from that meal.

I help moderate John Huggins’ Living the RV Dream Facebook group, and I’ve got to tell you sometimes it’s like herding cats as myself and the other administrators try to put out fires, stop arguments, and delete spam. And right now, just like all of social media, it’s blowing up with all kinds of facts, information, misinformation, speculation, crazy rumors, and conspiracy theories about the coronavirus. I can’t begin to count the number of comments and threads we have deleted, or how many people we have banned from the group for being argumentative, rude, or posting political comments, which are not allowed. Everybody in the world, including the online world, seems to be in a panic and/or have a crazy theory about who started this whole thing and what they’re doing or not doing to combat it. Yesterday I got an email from someone asking if I think he should sell his RV because so many state parks are shutting down across the country. I replied that sooner or later this is all going to blow over and asked if he plans to go buy a new RV then. Take a deep breath and relax, folks. We’ll get through this.

In a blog a few days ago I wrote that the air-conditioning had stopped working on our 2005 Ford Explorer. At the time, I suspected it was the compressor clutch on the air conditioner, something that several other readers mentioned might be the case. I dropped it off at Leon’s Automotive on Monday and they called yesterday to tell me that the clutch does seem to be the culprit, although there may be another related electronic issue. Depending on how much it costs to fix, Terry and I need to sit down and have a discussion. We have four vehicles, though around town we drive the Explorer more than any of the others. But it’s a 15 year old vehicle with 150,000 miles on it, and another 75,000 miles being towed behind our motorhome. We have to ask ourselves how much more do we want to invest in it. It’s been a very good rig and we really like it, but we wonder if it’s going to start nickel and diming us. I guess we’ll see what the repair estimate is when it comes in.

And finally, here’s a chuckle to start your day from the collection of funny signs we see in our travels and that our readers share with us. I’m not sure if this price is for the whole banana or just the fillets. 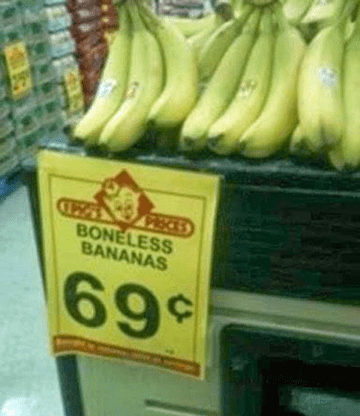 Thought For The Day – Sometimes I walk around my yard wearing a fake ankle monitor so my neighbors won’t ask me to watch their kids.