Nick's Blog » A Woman Before Her Time

In Richmond, Virginia we toured the home of a woman who truly lived before her time, a visionary who struggled to blaze a trail for generations who came after her to follow.

Maggie L. Walker was born during the Civil War on July 15, 1864, in the Richmond home of Elizabeth Van Lew, where her mother worked as a housekeeper. At that time, Richmond was the Capital of the Confederacy. Van Lew was a dedicated abolitionist and leader of a large network of Union spies.

Walker’s mother, Elizabeth Draper, was a former slave and her father was an Irish immigrant named Eccles Cuthbert. Forbidden to marry by Virginia race laws, the couple drifted apart and Elizabeth Draper later married another former slave named William Mitchell. He was the only father Maggie Walker ever knew, and they were close until he was murdered in 1876. After his death, Maggie’s mother supported her family by working as a laundress.

Watching her mother struggle every day to keep a roof over her children’s heads and food on the table convinced Maggie of the value of both hard work and an education. In a time when many black children had little or no schooling, she managed to graduate from high school in 1883.

An advocate for social reform, as a young woman Maggie joined the Independent Order of St. Luke, a mutual aid society begun in 1867 by a former slave named Mary Prout, and for 43 years Maggie dedicated her life to the organization and to helping other African-Americans get an education and achieve financial security.

In 1902 she became the first black woman to operate a newspaper when she established the St. Luke Herald. Then she chartered the St. Luke Penny Savings Bank, making her the first black woman to charter a bank in the United States and serve as its president. Her bank made it possible for other African-Americans to get loans to establish their own businesses and to purchase homes. These and her other business activities made Maggie Walker a wealthy woman, and she and her family lived in a handsome two story brick home in Richmond’s Jackson Ward district, the center of the city’s black business and social community.

In the years following the Civil War, Jackson Ward became a vibrant neighborhood of black-owned businesses, known as the “Black Wall Street” and the “Harlem of the South.” It was a hub for African-Americans who were eager to cultivate and exercise their freedom, and boasted of churches, grocery stores, restaurants and nightclubs catering to black patrons. Billie Holiday sang there and Bill “Bojangles” Robinson lived and danced there.

Though he was active in fraternal, civic, and social circles, Maggie’s husband, Armstead Walker Jr., was a small, soft spoken man who seemed to be happy to step back and allow his wife to take center stage. He was a successful brick contractor and a mail carrier and was well respected in the community. By all accounts the marriage was very happy. They had two sons, Russell and Melvin, and an adopted daughter named Polly. At different times both sons and their families lived with Armstead and Maggie.

Tragedy struck the family on the night of June 20, 1915, when Russell Walker spotted a shadowy figure he thought was a burglar and fired a pistol at him. In reality it was his father Armstead, who was killed. While those who were envious of the Walker family claimed the shooting was intentional and Russell was tried for murder, he was acquitted.

Unfortunately there would be more heartache in store for Maggie. Both of her sons died in their mid-30s, and illness caused her to lose the use of her legs, forcing her into a wheelchair. But her spirit persevered and she continued to work hard for the betterment of her people. She set an example for other black women, showing that there were alternatives to a life of low paid, unending labor as domestic servants, laundresses, or in one of Richmond’s tobacco warehouses. She would say “I was not born with a silver spoon in my mouth but a laundry basket practically on my head,” proof that if she could achieve success, so could they.

Maggie L. Walker died at the age of 70, on December 15, 1934. Her funeral was one of the largest in the city at that time. School closed early, traffic was rerouted away from the funeral procession to Evergreen Cemetery, and businesses flew their flags at half-staff. The mayor of Richmond and thousands of others braved the cold, rainy weather to attend her funeral and pay their respects.

While Maggie Walker may be gone, her legacy lives on today. Four years after her death the City of Richmond dedicated a new high school in her honor. Today it is the prestigious Maggie L. Walker Governor’s School for Government and International Studies. A middle school in Brooklyn, New York was named after her, and streets in Richmond and Newport News, Virginia carry her name. In 1978, her home became a National Historic Site to preserve and tell her story for generations to come. 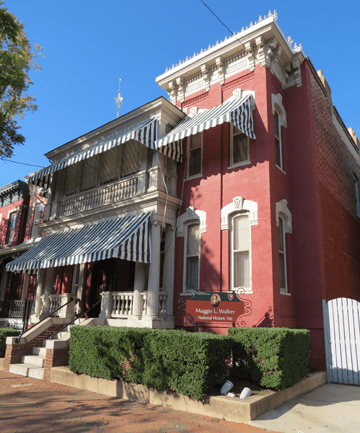 A tour of the Maggie L. Walker National Historic Site begins at the Visitor Center, located at 600 North 2nd Street in Richmond. After viewing a film on Maggie Walker’s life and stunning achievements, a ranger leads visitors next door to the Walker family home for a guided tour.

It is amazing to see how well appointed the home is and how many features it has, including an elevator that Maggie used to go from her second floor bedroom to the home’s first floor. We came away from our tour with a profound respect for the woman who lived there and set such an example for those who would follow. 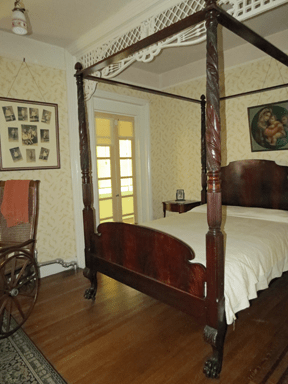 Tours of the home are free and are offered on a first come, first serve basis. Visitors should allow at least 60 minutes to tour the site. Free street parking is available on 2nd Street. Some of the streets in the area are narrow and not suited to a large RV. For more information on the Maggie L. Walker National Historic Site, call (804)771-2017 or visit their website at http://www.nps.gov/mawa/index.htm.

Thought For The Day – Dreams don’t come true, decisions do.