Today I thought I would give you part two of an update on our trip from Florida to Arizona, with more to follow.

After two days in Hondo, Texas, we hit the road again, traveling thirty miles north on a two-lane state highway to the small town of Bandera, which bills itself as the Cowboy Capital of the World. Bandera is one of those places we always planned to visit during our years as fulltime RVers, but never seemed to get there. I’m glad we finally did. 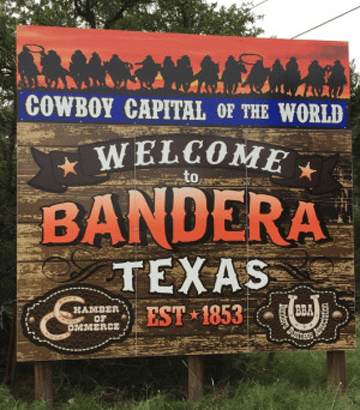 We love browsing in antique stores and stopped at a great one on the south side of town, Western Trail Antiques. They had two floors of goodies, everything from Old West items to Indian jewelry, furniture, and more.

The manager, Charlie, is a fine gentleman and we really hit it off. He sold me several very cool old police badges for my collection, and I also found some excellent reference books for future writing projects. 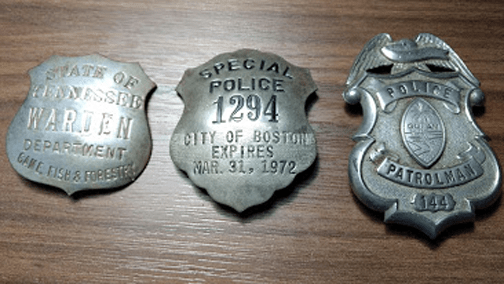 I did pass on the three old coffins they had on display downstairs, however. 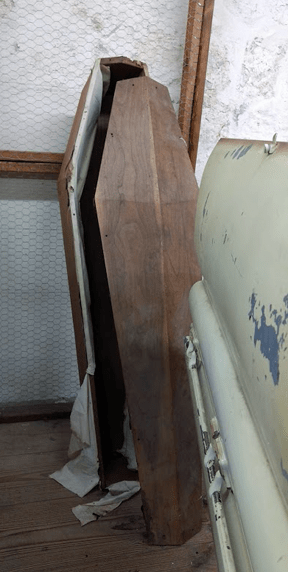 From Bandera, it was another 26 miles of two-lane road through historic Bandera Pass to Kerrville and Interstate 10. The pass dates back thousands of years as a travel route used by Native Americans, Spanish explorers, missionaries, cattle drives, and settlers. In the 1840s, Texas Rangers and Indians fought several skirmishes at and near the pass.

After a quick stop in Kerrville we got on Interstate 10 and took it west, planning to make it to Fort Stockton, where we would stop for the night. It had been a chilly, windy day, and the further we drove, the windier it got. Then graupel started hitting the windshield. For those of you unfamiliar with the term (I was until Miss Terry told me) graupel is precipitation that forms when supercooled water droplets are collected and freeze on falling snowflakes, forming small balls of rime. It is the German word for sleet. See, you learned something new today, didn’t you?

Between that and the fact that it was starting to get dark, and that vehicles heading in the opposite direction were covered in snow, we shook up the Jello and stopped about a hundred miles earlier than planned, at the Hampton Inn in Ozona. I’m glad we did because it got down to 19 degrees overnight, and we learned the next morning that a couple of hours after we stopped someone hit a patch of ice on the highway just a mile or so down the road, spun out and into the path of other traffic and was killed.

We waited until about 10 a.m. the next day to leave, taking advantage of the hotel’s free breakfast and giving the sun time to hopefully warm the road surface. Stopping for gas at Fort Stockton, I was going to clean our van’s windshield but this is what I found when I attempted to do so. The water in the station’s plastic squeegee holder had frozen solid! 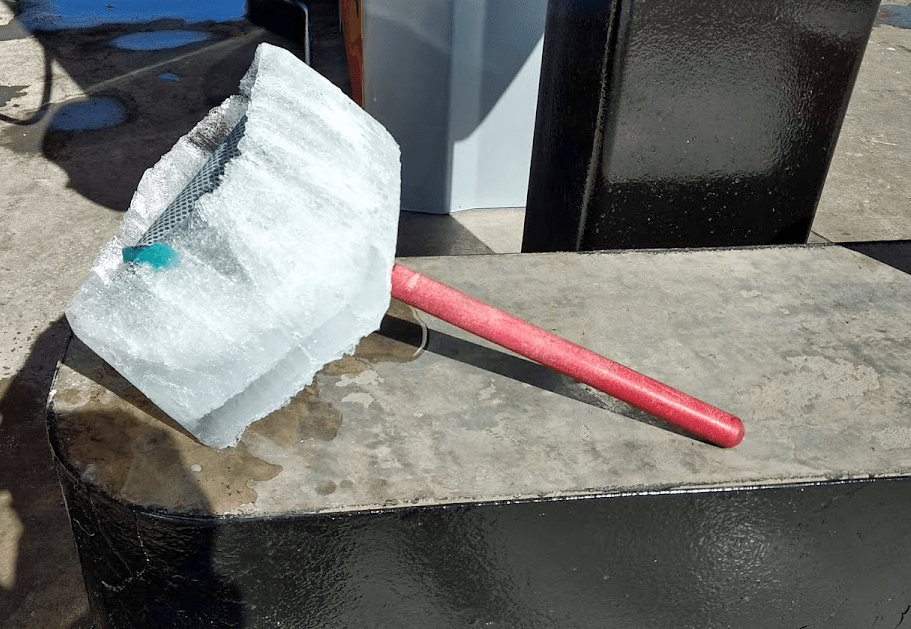 The strong wind never let up all the way to El Paso, knocking our Chrysler Pacifica’s normal 25 – 26 miles per gallon down to 18. We sure appreciated the van’s heated seats and steering wheel, which I had a death grip on most of the way. Terry got a couple of pictures of the snow-covered mountains as we made our way west. 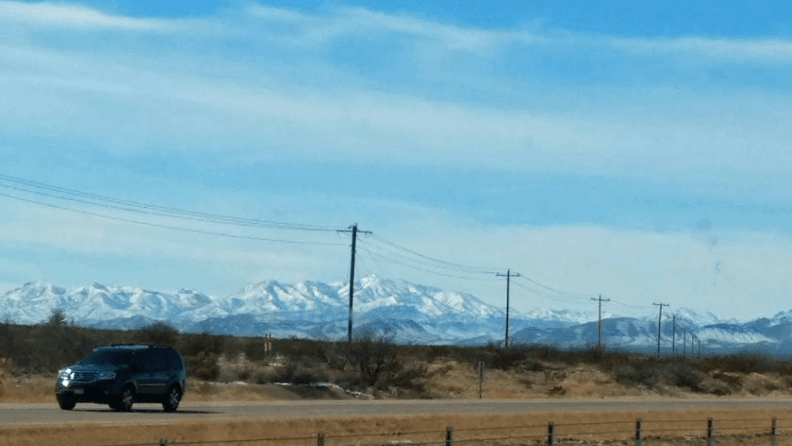 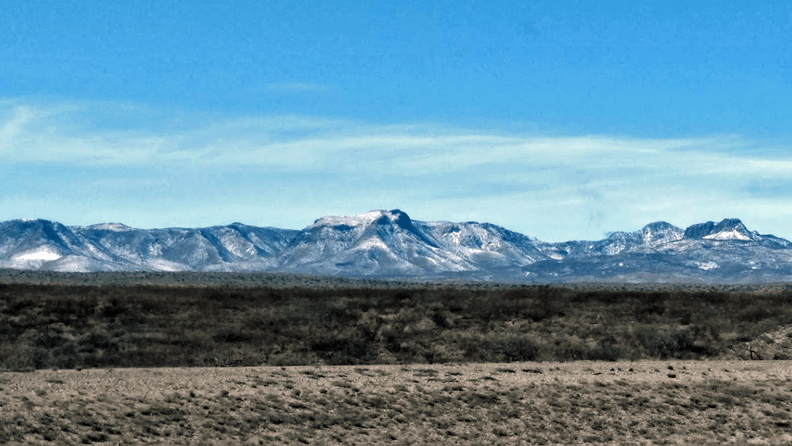 Traffic in El Paso is always heavy and this time around was no exception, but we managed to dodge the cars changing lanes at the last minute without signaling, to outrun the tailgaters, and to slow down enough to avoid rear-ending those ahead of us who came to sudden stops for no apparent reason.

We were glad to cross into New Mexico, and before we knew it, we were at the inspection station a few miles down the highway. We assured the nice Border Patrolman that we were not terrorists and didn’t have a van load of illegal aliens hiding under our luggage and he passed us on. From there it was a short drive to Deming, where we checked into the LaQuinta hotel next door to the Escapees RV Club’s Dreamcatcher RV Park for a two day stay.

By then I was glad to be off the highway, and we were even more thrilled to visit with our dear friends Tom and Diane Owens, who have a leased site at Dream Catcher. These are two very special people who mean the world to us, and we were really looking forward to spending some time with them. 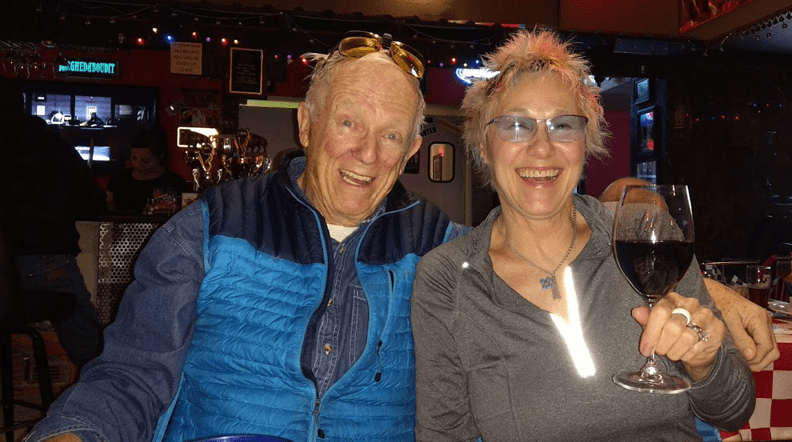 I’ll tell you more about that, and about a quick but painful trip to Mexico, in the next installment.

Thought For The Day – They say with age comes wisdom. So I don’t have wrinkles, I have wise cracks.