Today I thought I would give you part one of an update on our trip from Florida to Arizona, with more to follow.

We left our home in Edgewater on Saturday, February 1st and drove 570 miles west to Ocean Springs, Mississippi, where we checked into the Hampton Inn just a block or two off the highway. We usually stay at Hampton Inns and have stayed at this property once before. As usual, we got a friendly greeting, and were pleased to see that the nice young man at the desk upgraded us to a two-room suite. And for less than $100! What a nice surprise after a long day on the road! 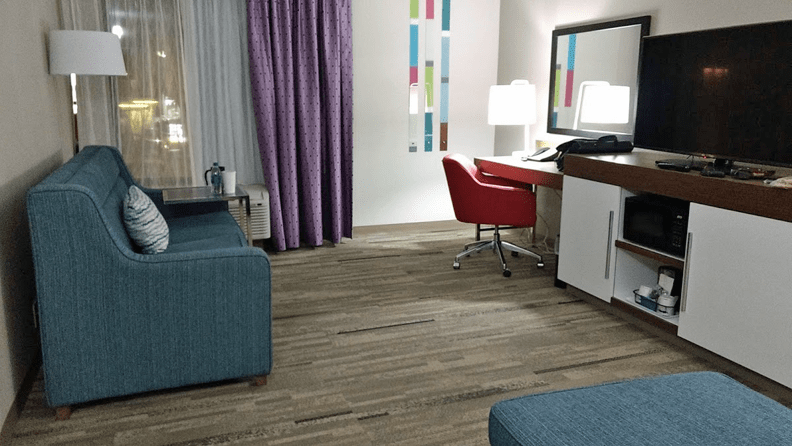 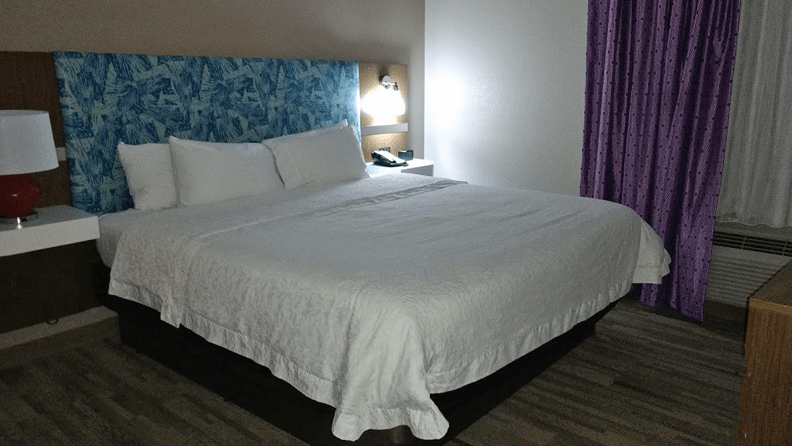 Once we took our luggage up to the room we set off in search of food, ending up at a place called Woody’s Roadside, which was highly recommended by Yelp reviewers. Being a Saturday night, it was crowded, but we only had to wait about ten minutes for a table. The food and service were excellent, and our only complaint was that the music was so loud we could not have a conversation. Why do restaurants think this is something diners want? It’s the reason we seldom eat at Texas Roadhouse anymore.

The next day was an easy 445 mile run across the rest of Mississippi and Louisiana and into Texas. There was a time when Interstate 10 in Louisiana was one of the roughest highways in the country, but not anymore. Most of it was smooth and in great shape, except for a few construction zones. Coming into Texas was another story. There the highway was rougher than a cob, with miles of narrow lanes through even more construction zones.

Somewhere just east of Houston we encountered this low rider with wicked looking spinners on his wheels. I guess he thinks it’s pretty cool. Good for him. 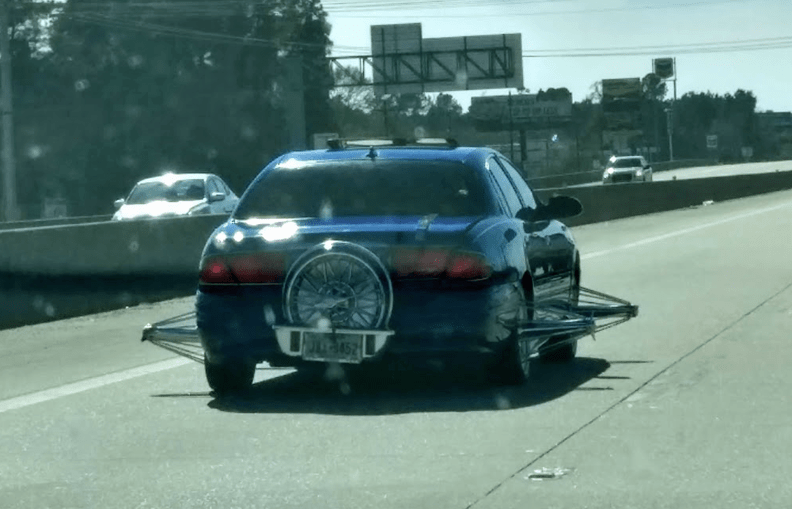 We arrived in Katy about 4:30, checked into the Hampton Inn, and once we had our luggage in our room, our friends Greg and Jan White met us, and we went to the nearby Saltgrass Steakhouse for dinner. The food was great, and as so often happens when we get together with those two, we talked until they were closing the place down at 9:30.

When we checked in at the hotel, we were surprised and please once again to be upgraded to a larger room with a Jacuzzi bathtub. After soaking in that for a while, Terry and I both said we need one of those at home! 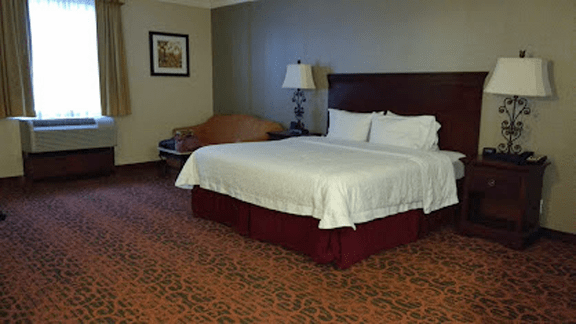 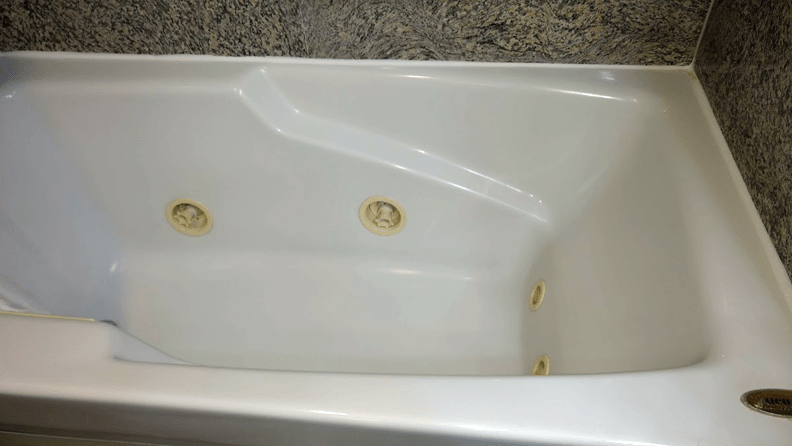 Monday was a short driving day, only 200 miles or so to Hondo, about 40 miles west of San Antonio. We spent two days at the Best Western there, which was acceptable but nothing special. We were there to visit longtime RVing friends Mike and Elaine Loscher, and to get together with my fellow authors Billy Kring and George Wier, along with Billy’s wife Elizabeth and George’s wife Sally. I wrote about that in a blog post the other day titled Texas Sure Is Friendly. Billy and George are two of my favorite authors and I wanted to talk to them about maybe doing a collaboration on a box set of the first books in each of our mystery series. I will keep you updated if the project goes forward.

Hondo is a typical west Texas town with not much to see or do, just a few stores and restaurants, and an RV park. But there are some neat old buildings in its small downtown, just off the highway. A few miles west along U.S. Highway 90 is D’Hanis, another wide spot in the road. There we found the handsome old J.M. Koch Hotel, built in 1906 by Chinese railroad laborers. The building served as a hotel until 1920, when it became a feed store for a while before a new owner turned it into an upscale boarding house. I’m not sure if it is occupied at all now, though there was a TV dish on a pole in the side yard. 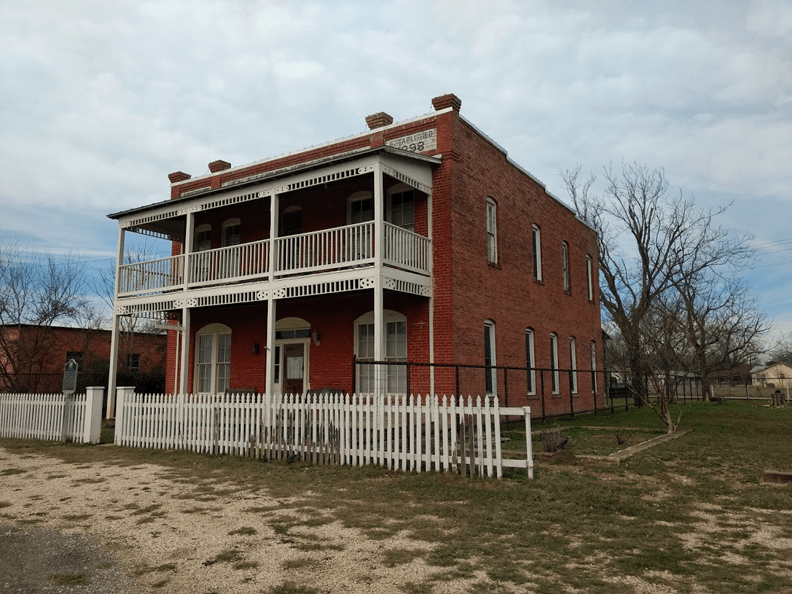 In my next update I will tell you about our trip from Hondo to Deming, New Mexico, a drive that was perilous at times and called for some real white knuckles on the steering wheel.

Thought For The Day – Last week I bought a toilet brush. Long story short, I’m going back to toilet paper.