Nick's Blog » The Colonel And His Chicken

Harland Sanders was a born entrepreneur, a hardworking hustler who knew how to turn adversity into good fortune. The old saying goes, “when life gives you lemons, make lemonade.” In Harland Sanders case, when life handed him lemons, he made chicken.

Born on September 9, 1890, near Henryville, Indiana, Sanders left school at age twelve and went to work to support his family. Sanders held a variety of jobs, including working as a farmhand, working for the railroad, as a secretary, insurance salesman, and ferryboat operator. He was also a soldier for a time, though the title Colonel that added to his fame was not due to military service, but rather an honorary title bestowed by the State of Kentucky. In 1930, Sanders moved to the small town of Corbin, Kentucky and moved his family into the back of a small gasoline service station.

In the days before the Federal highway system was built, Corbin was on a main route between Florida and the northern states. Every day a steady stream of cars rolled past Sanders’ service station, and he made a good living pumping gas, fixing flat tires, and tending to the needs of the traveling public.

Business was good at first, but the Great Depression hit the nation hard and traffic dwindled to only a few cars a day. With a family to feed and bills to pay, Sanders needed a way to supplement his business. He had always loved cooking, so he began selling meals to folks who stopped at his gas station. He moved his family’s dining room table into the gas station and could seat six customers at a time. In 1932, he purchased a small restaurant across the street from his service station and named it Sanders Café. 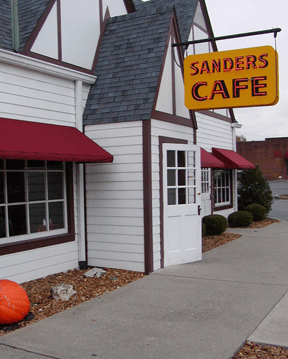 Sanders’ combination of hard work, good food, and showmanship proved successful, and soon his little restaurant became popular with travelers and the local people alike. While Harland Sanders would win fame for his fried chicken, it was his country ham that brought folks to his café for breakfast. Serving a large portion of Smithfield ham, along with biscuits, red-eye gravy, fresh eggs, and grits, Sanders touted his breakfast special as “$1.70 – not worth it, but mighty good.” To promote his morning specialty, he had a photograph of waitress Leota McBurney beside a table displaying the best breakfast he had to offer and used it in all of his advertising.

Sanders invested his profits in the business, building a motel next to the café. Believing travelers wanted two things; good food and a good, clean place to sleep, he had a brilliant idea. Sanders already knew his reputation for good cooking was well known, drawing customers to his restaurant. Now he needed to make those same people aware of the quality of his motor court rooms. What better way than to show them? So Sanders built a complete full-size motel room right inside his restaurant!

Furnished on the outside to exactly replicate his motor court next door, the outside of the room had shutters, a window box, a front door, and a blue shingle roof. The interior was finished and furnished just like the motel rooms, with Celotex walls, carpeted floor, tile bathroom, and a maple bedroom suite. Sanders even located his restaurant’s pay telephone in the closet of the motel room to expose more café customers to the quality of his lodging! Realizing that women would not allow their family to sleep in a room that they did not feel comfortable in, Sanders also located the entrance to the ladies’ restroom inside the replicated motel room.

Business boomed for quite a while, and it was during this time that Sanders developed his world-famous Kentucky Fried Chicken recipe. Life was good and Harland Sanders was a success. But the good times were not to last.

In 1956, plans were announced to build a new Federal highway that would bypass Corbin. Realizing that the loss of all that traffic would mean ruin for his business, Sanders, then 66 years old, sold the restaurant and began traveling across the country, selling seasonings and his fried chicken recipe to other restaurants. His success at this endeavor led to the world’s largest commercial food service system, and Kentucky Fried Chicken became known and loved throughout the world. By 1964, Sanders had sold 600 Kentucky Fried Chicken franchises, and sold the company for $2 million. He continued to serve as the spokesman for the restaurants, and by 1976 he was named the second most recognized celebrity in the world.

Colonel Harland Sanders died on December 16, 1980, and was given a formal state funeral in the State Capitol in Frankfort, Kentucky. He is buried in Cave Hill Cemetery in Louisville, Kentucky. But his legacy lives on – by the year 2002 there were 5,231 Kentucky Fried Chicken restaurants in the world and more are being added all the time. It is estimated that every man, woman, and child in the United States consumes nine pieces of the Colonel’s chicken every year.

Today Sanders’ original café still stands in Corbin, Kentucky and still sells his delicious fried chicken. Here you can get a good meal and see the kitchen where the Colonel perfected his chicken recipe, and just like those travelers from long ago, you can inspect the motel room, just as it was when Harland Sanders ran the place! 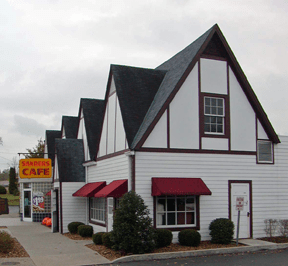 Sanders’ kitchen, where he created his famous chicken recipe, has been carefully restored. Sanders had white floors, walls, and ceiling because he wanted to be able to tell at a glance if the kitchen was clean. He built openings in the wall so restaurant patrons could see that everything was clean and proper. It was in this kitchen that Sanders also came up with the idea of frying his chicken in a pressure cooker, reducing the cooking time from 30 minutes to nine, effectively inventing the concept of “fast food.” While the present KFC restaurant has a modern kitchen, visitors can still peer through the windows into the original restaurant kitchen and see things just as they were in Sanders’ day.

Though the motor court Sanders built next door is long gone, the restaurant still has one of Harland Sanders’ motel rooms on display, exactly as it was when weary travelers stopped in for a meal and looked over the accommodations before checking in. The motel room is complete with original furnishings. The 1940s vintage pay telephone still works, though only for local calls.

The restaurant displays a very nice collection of Colonel Sanders and Kentucky Fried Chicken memorabilia, including old menus, early-day fast food boxes, advertising signs, and a scale model of the original Sanders Motor Court and Sanders Cafe buildings. A visit to Sanders Café in Corbin, Kentucky is a step back in time, where you can learn about the man who invented fast food, have a nice meal, and take a break from the fast pace of the interstate highway a short distance away.

The original Sanders Café, home of Kentucky Fried Chicken, is located off of Interstate 75 on US Highway 25E. Take Exit 29 a couple of miles east to the restaurant. The parking lot is not big enough to accommodate a large RV, but a Wal-Mart Supercenter located near the exit might be a good place to leave your RV and drive your tow vehicle to Sanders Café.

Be sure to enter our latest Free Drawing. This week’s prize is an autographed copy of Big Lake Wedding, the fifteenth book in my Big Lake mystery series. To enter, click on this Free Drawing link or the tab at the top of this page and enter your name (first and last) in the comments section at the bottom of that page (not this one). Only one entry per person per drawing please, and you must enter with your real name. To prevent spam or multiple entries, the names of cartoon or movie characters are not allowed. The winner will be drawn Sunday evening.

Thought For The Day – Everything will be okay in the end. If it’s not okay, it’s not the end.

One Response to “The Colonel And His Chicken”