Nick's Blog » Texas Sure Is Friendly

Somebody once told me I could go to a stranger’s funeral and make friends with the guy in the box by the time the preaching was over. I’m not sure if that is 100% true, but I have always believed in the old saying that a stranger is just a friend you haven’t met before.

Miss Terry can tell you that in our days as fulltime RVers, it was not uncommon for me to walk down to the dumpster to throw a bag of trash away and be gone for an hour because I struck up a conversation with somebody and lost track of time. But in my defense, I always felt I was doing folks a good deed. I mean, who wouldn’t want to meet me and get to know what a charming chubby chap I am, right?

The highlight of our current trip has been being able to spend time with some very special friends of ours. Our second night on the road found us in Katy, Texas, on the west side of Houston, where our pals Greg and Jan White met us at our hotel and then we all went to Saltgrass Steakhouse for dinner. It’s a favorite of theirs but we had never been to one before. The food was excellent and the conversation was great, of course. In fact, we sat there talking for so long that they were closing the place up around us by the time we called it a night. 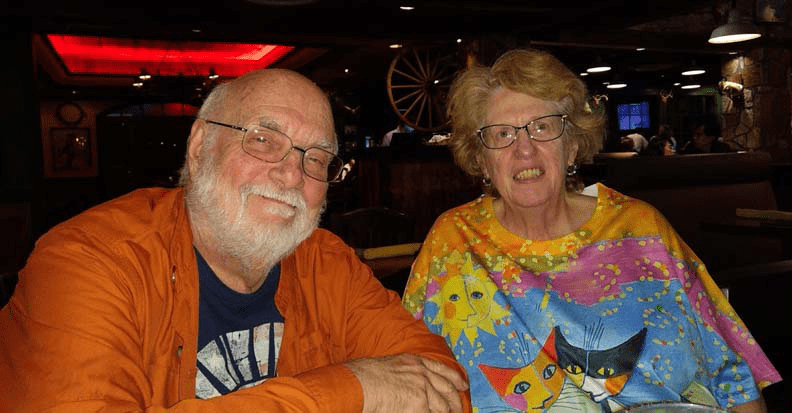 The next day we had an easy run of just 200 miles to Hondo, which is about 40 miles west of San Antonio on US Highway 90. Our dear friends Mike and Elaine Loscher have a lot at the Escapees RV Club’s Lone Star Corral here. Unfortunately, Elaine has been in a nursing home a few miles from the RV park for quite some time now, following a stroke. Mike and Elaine never missed one of our Gypsy Journal RV rallies and always worked hard as volunteers to help make the events a success. Whether it was helping to park the RVs as people arrived for the rallies, helping Terry get everybody registered and signed in, or helping with the pizza parties, it didn’t matter what needed doing, they were up for the task. Mike is a devoted husband who spends most of every day at the nursing home with Elaine, the two of them doing what they can to make the best of a bad situation. It sure was good to see Mike and Elaine again. We love those two.

My author buddy Billy Kring and his wife Elizabeth live a few miles away, and Monday night we got together with them for dinner and a few hours of good conversation. Billy writes the excellent Hunter Kincaid mystery series. Besides being one of my favorite authors, Billy has been an actor, a high-ranking Border Patrol Agent, and a consultant on terrorism and international border issues. He is also one of the nicest, most humble men you would ever hope to meet. He and I had an instant connection from the very start, and we have both said that if we lived closer to each other we’d never get any work done because we’d be hanging out swapping lies all the time. Elizabeth is an absolute sweetheart and Terry feels the same way about her as I do about Billy.

Last night we got together with Billy and Elizabeth again and added two more great friends, George Wier and his wife Sally, to the party. George is not only the author of the popular Bill Travis mystery series, along with many other books, he is also a very talented musician and artist. As they say, behind every great man is an even greater woman, and Sally definitely defines that role.

Here is a picture of the six of us at dinner. From left to right, there is Miss Terry, myself, Elizabeth and Billy, and then George and Sally. 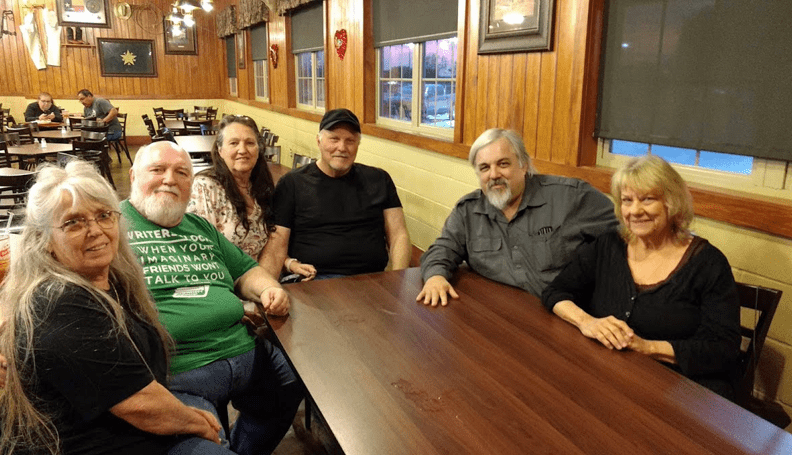 And here are the three amigos. Billy is the tall guy in the center, George is the pretty boy on the right, and you all know Humpty Dumpty on the left. 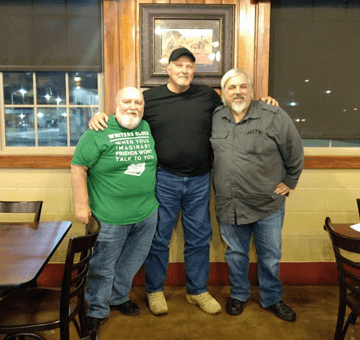 And finally, there are some friends I don’t want or need in my life, so when we saw this sign yesterday, I made it a point not to slow down for anybody. 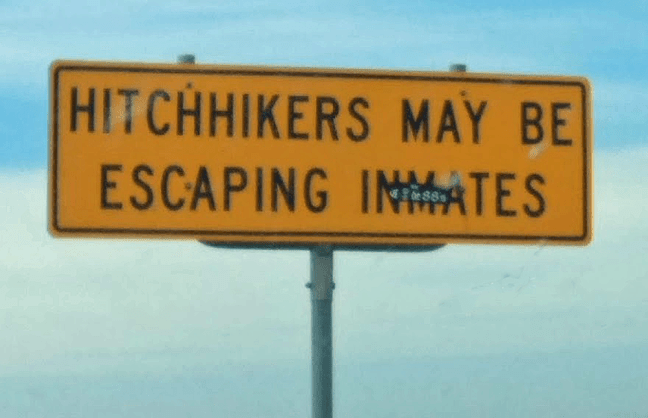 Thought For The Day – Camping is nature’s way of promoting the motel business.

2 Responses to “Texas Sure Is Friendly”