An outpost of westward expansion, Fort Laramie in eastern Wyoming was crucial in the transformation of the American West. The fort served as a fur trading post, military garrison, and as a way station for fur trappers, Indian traders, missionaries, and Oregon Trail emigrants for over 50 years during one of the most important time periods in the history of the United States.Fort Laramie served everyone from mountain men to Pony Express riders, as well as being an important staging area for the United States Army during the Indian wars. 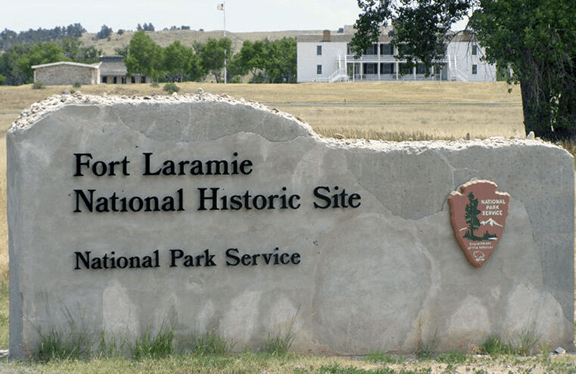 Founded as Fort William by fur trader William Sublette and his party of mountain men in 1834, the fort sits near the confluence of the Laramie and Platte Rivers. Two years later the American Fur Company bought the tiny stockade from Sublette, and it thrived as a major fur trading center for a few years. By 1841 a competing trading post, called Fort Platte, was built a mile away. The American Fur Company responded by replacing their original fort, which had fallen into disrepair over the years, with a larger adobe structure they named Fort John. However most people called the location Fort Laramie, after the nearby river, and the name stuck.

It should be noted that these outposts did not serve a military function during this period and were built and operated by private companies to take advantage of the rich fur trade. Mountain men, trappers, buffalo hunters, Indians, and prospectors all stopped at the forts to trade. By 1840 the forts were also doing a very good business supplying the hordes of emigrants seeking new horizons down the Oregon Trail. As the fur trade dwindled, commerce associated with the westward migration replaced it in importance.

Relations between the Whites and Indians were peaceful at first, but as more and more settlers came into the area, friction developed and wagon trains became targets of opportunity for marauding war parties. Answering the emigrants’ demands for protection, in 1849 the Army purchased Fort Laramie and turned it into a military outpost. A new fort was erected by the Army around a large parade ground. This new Fort Laramie included barracks, officers’ quarters, a bakery, stables, mess hall, guardhouse, and other buildings. 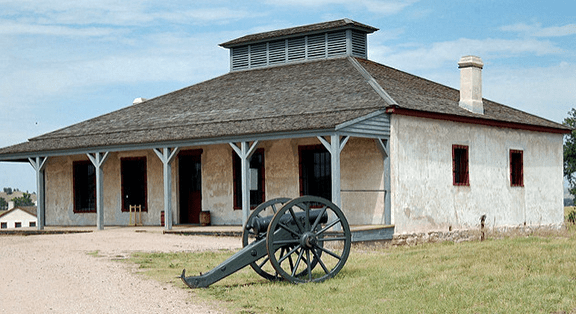 As in most military posts of that period, there were no walls surrounding the fort. The Army relied on the numbers of troopers garrisoned and their firepower to prevent attacks. Fort Laramie was only raided once, in the summer of 1864, when a band of about 30 Indians followed a cavalry patrol back to the fort, rode onto the parade ground and made off with the patrol’s horses.

The fort’s first garrison consisted of a company of infantry and two companies of mounted cavalry. Many of the soldiers were recent immigrants from Europe, most poor and illiterate. Conditions and discipline on the frontier could be harsh at times, and the post suffered a desertion rate of 33 percent during its busiest years. As happens with most soldiers from any war, more of the soldiers’ time was spent performing routine maintenance, training, and garrison duties than actually engaged with the enemy.

Perhaps the most infamous battle between Fort Laramie’s soldiers and the Indians occurred when a small patrol led by Lieutenant John L. Grattan entered a nearby Sioux village to arrest an Indian accused of stealing a cow from a passing wagon train. When the Indians refused to turn over the suspect, Grattan pressed the issue and a fight erupted, in which the entire patrol was killed. The incident, known as the Grattan Massacre, was a turning point in relations between the Indians and Whites, leading to further confrontations.

As troubles with the Indians increased and more and more settlers came west, Fort Laramie took on even greater importance as a refuge and source of protection. Troopers from the fort ranged throughout the area to escort wagon trains and to answer threats from the hostile Indians. During the Civil War, the Oregon Trail became the country’s major overland mail route, and Fort Laramie became a major station for the Pony Express until the completion of the first transcontinental telegraph was completed.

Later the post served as a stage station and an important stopping point for those headed to the gold fields of the Black Hills.
Life at Fort Laramie was relatively comfortable for some – the bakery supplied fresh bread daily, officers and their ladies dined on fine china and were entertained by musical recitals and plays, and laundresses kept the soldiers’ uniforms in good repair. (Laundresses drew a regular food ration and earned more money than a line trooper, making them quite a catch for the soldiers and NCOs looking for marriage.) 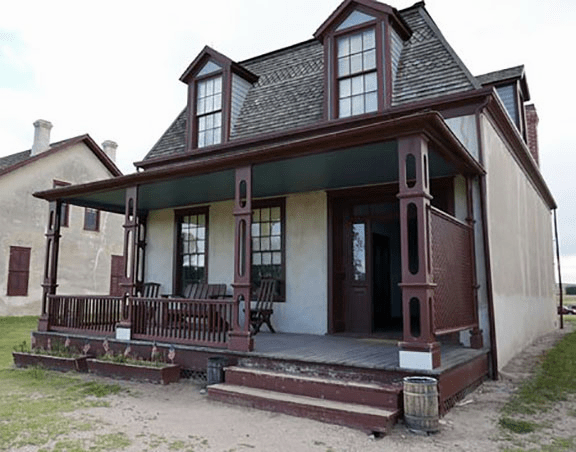 By the late 1880s, the Plains Indians had been conquered and the need for the fort decreased until it was abandoned in 1890, its buildings sold at public auction. By April, 1890, all of the fort’s 60 buildings had been sold and were used as private homes and businesses, or were stripped and allowed to deteriorate into oblivion.

The fort was back in the government’s hands by the end of the 1930s and restoration was begun, a project that lasted until 1964. Restorers depended on extensive research, old drawings, photographs, and records to make the restoration as accurate as possible. Close attention was paid to every detail, including using square-cut nails and oak dowels to ensure the finished work was as close to original as possible. Nearly a dozen buildings have been restored and are open to visitors, including the stockade (below), while the ruins of other structures remain visible. 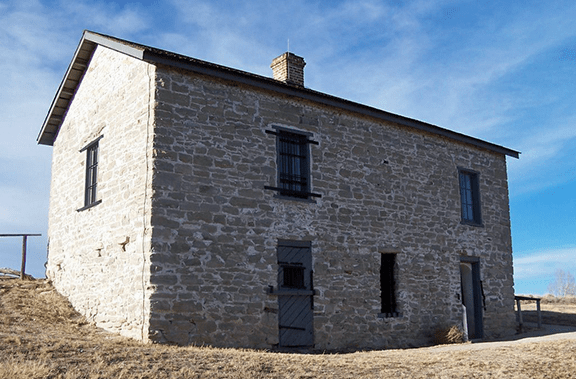 Among the most successful, and most imposing, of the fort’s restored structures is “Old Bedlam,” used to house bachelor officers and as the fort’s headquarters for a time. The building is the oldest military building in Wyoming. Today visitors can walk through its rooms and see it just as it looked during the fort’s busiest period.

Other restored buildings include the cavalry barracks, a huge two story structure that includes sleeping quarters, dining room, and day rooms. After being sold to the private sector, the old barracks served as a private residence, store, saloon, and dance hall. Today visitors see it as it looked when it housed troopers who spent their time pursuing Indians and protecting wagon trains. 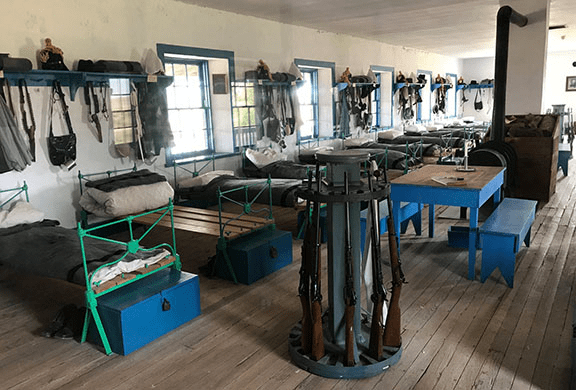 The commissary is used today to house the visitor center, which includes displays on the fort’s history, the Indian wars, and a gift shop stocking an excellent selection of books and souvenirs. Restored officers quarters give visitors the opportunity to see what life was like for the genteel class on the frontier. The trading post, once the centerpiece of the fur trade, has been restored and looks much as it did 150 years ago.

Now a National Historic Site, administered by the National Park Service, Fort Laramie is open to visitors every day of the year except for Christmas, New Years Day, and Thanksgiving Day, from 8 a.m. to 4:30 p.m. From early June to Labor Day, hours are extended to accommodate visitors. Fort Laramie is located three miles south of the town of Fort Laramie, Wyoming, off U.S. Route 26.

There are no camping facilities at the fort, but RV parks and motels are available in the nearby towns of Fort Laramie, Lingle, Gurnsey, and Torrington. There is a small admission charge, and National Park Service passes are honored. Other nearby historical attractions you should check out while you’re in the area include the Oregon Trail Ruts and Register Cliffs.

Be sure to enter our latest Free Drawing. This week’s prize is an autographed copy of Big Lake Wedding, the fifteenth book in my Big Lake mystery series. To enter, click on this Free Drawing link or the tab at the top of this page and enter your name (first and last) in the comments section at the bottom of that page (not this one). Only one entry per person per drawing please, and you must enter with your real name. To prevent spam or multiple entries, the names of cartoon or movie characters are not allowed. The winner will be drawn Sunday evening.

Thought For the Day – Never make snow angels in a dog park.