Nick's Blog » Did Anybody Get The License Number?

Did anybody get the license number of the truck that hit me? If you did, please let me have it. Because that darned thing whooped my butt!

Sometime early Sunday morning I woke up with a sore throat, which seemed to get worse. I still wasn’t feeling great when we left Mesa early Monday afternoon for the drive up to our old hometown of Show Low. By the time we got here I knew I had a nasty cold coming on.

We visited with my daughter Tiffany and her family for a while, then we all went out to dinner at Pizza Factory. As we were driving there, Miss Terry said that we’ve been gone for over 20 years and that in the unlikely event we were to bump into someone from when we lived here, they probably wouldn’t recognize us, and we wouldn’t recognize them. So, of course, as soon as we went to the counter, the woman working there said “Terry? Nick? How are you?” It was Christina Baca, whose husband Freddie worked for Terry for many years at the glass shop she ran before I married her and made her run away with me. We had a quick reunion with Christina, and we are going to try to visit her and Freddie while we are in town.

By the time I woke up yesterday I felt like somebody had tied me up in a blanket and beat me with a broomstick. We made a run to Walgreen’s to stock up on cough drops, Nyquil, DayQuil, Airborne, and other supplies. Miss Terry is just now starting to cough a bit, so I think we’re both going to get it. We both had our flu and pneumonia shots, so hopefully we’ll escape the worst of whatever this is.

But I wasn’t too sure about that last night when I saw this coming at me! For a minute I thought my body had gone floating off to Roswell, New Mexico, and one of those aliens was going to kidnap me or something. But as it turns out, it was really my granddaughter Destiny, who isn’t a space cadet or anything like that. 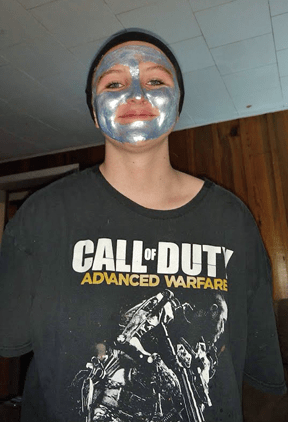 Thought For The Day – Don’t bother walking a mile in my shoes. That would be boring. Instead, spend 30 seconds inside my head. That will freak you out!

One Response to “Did Anybody Get The License Number?”