Your first view of Devils Tower National Monument, rising 1267 feet above the Belle Fourche River and surrounding grassland and Ponderosa pine forests of northeastern Wyoming like a rocky sentinel, is always breathtaking. The closer you get and the more time you spend here, the more the power and beauty of this natural wonder takes hold of you.

No one yet has a definite answer as to how exactly Devils Tower was formed. Some scientists believe the tower was formed when molten rock from an early volcano was trapped between other rock formations. Over time those rocks eroded away, leaving the tower as we see it today. Other theories have suggested that Devils Tower is a volcanic plug or that it is the neck of an extinct volcano, but this is an unlikely theory since there is no evidence of volcanic activity, such as volcanic ash, lava flows, or volcanic debris, anywhere in the surrounding countryside. 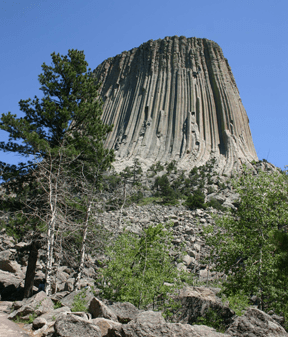 Long before the first white men wandered into the West, Northern Plains Indian tribes worshiped at this remarkable geologic formation. For centuries many Indian tribes came here to camp, hunt, for religious ceremonies, and vision quests. Even today this is sacred ground to Native Americans. Visitors to Devils Tower are asked not to interfere with those involved in ceremonial activities or to remove offerings such as prayer cloths and bundles.

The Indians know this place by many names – the Lakota call it Bear Lodge, to the Arapaho it is Bear’s Tipi, the Crow know it as Bear’s House, and to the Cheyenne it is Grizzly Bear’s House. One Indian legend says that three girls wandered away from their tribe’s encampment and were chased by a giant bear. They fled to the top of the great rock formation, and the bear left long deep claw marks on the tower’s sides as it tried in vain to reach them.

In 1873, Colonel Richard Dodge led a military expedition into the region and asked his Indian guide to take him to the monolith. Not wanting to lead the White Eyes to such a sacred place, he said that the “bad gods” lived there, and said its name was Bad God’s Tower. Anglos later shortened the name to Devils Tower. Native American people are opposed to the name Devils Tower because of its negative connotations. Several tribes have worked to have the name changed to Bear Lodge, but it doesn’t look like the official name will change in the foreseeable future.

The arrival of white people in the region brought about a major decline in the use of Devils Tower and the nearby Black Hills by the Plains Indians. The first French explorers came here in the 18th century, followed by fur traders and military expeditions. From the 1850s on, encroaching civilization and conflicts between the two cultures decimated the Indian people and drove them from their traditional lands. In their wake, the first ranchers entered the region in 1879. Everyone, fur trappers, explorers, and settlers alike were awed by the tower’s majesty.

As ranches and homesteads began springing up, many of the newcomers traveled considerable distances to reach the imposing landmark for Fourth of July celebrations, and it soon became a popular gathering place. Anticipating the future importance of Devils Tower, forward-thinking government officials took action in 1890 to protect the rock formation and surrounding land, ordering that all applications for ownership be rejected. A year later the U.S. government designated it a temporary forest reserve. In 1906 President Theodore Roosevelt proclaimed Devils Tower the country’s first National Monument. Today the 1347 acre park is covered with pine forests, woodlands, and grasslands, and is home to deer, prairie dogs, and other wildlife.

A popular activity at Devils Tower is rock climbing. Adventurous climbers use the free climbing style known as crack climbing to reach the top. Climbers work their way upward using naturally occurring ledges, cracks, and projections. In free climbing, the ropes and other protective devices serve only as a safety back-up. Climbing is usually done in pairs for safety. Once they reach the top, climbers rappel back down the sides of the tower.

From the earliest days, climbing the tower was a challenge. In 1893, two local ranchers named William Rogers and Willard Ripley were the first to reach the summit, with the aid of a 350-foot ladder they hung from stakes hammered into the tower’s cracks. Two years later, using the same ladder, Linnie Rogers repeated her husband’s achievement and became the first woman to climb Devils Tower. Over the next thirty years, as many as 200 climbs were made using this method.

In 1937, Fritz Wiessner, Lawrence Coveney, and William House completed the first ascent of the tower using modern climbing techniques. Four years later, in 1941, a daredevil named George Hopkins parachuted to the tower’s relatively small summit, an area about the size of a football field, to “prove that I can hit the impossible.” Hopkins’ aim may have been good, but his planning was lacking. Once he landed on the top, he was stranded there for six days before a party of rock climbers could rescue him.

Climbers from all over the world consider Devils Tower to be a premier climbing area. Some 4,000 climbers come to Devils Tower each year. While it is generally assumed that rock climbing is inherently very damaging to the tower, the National Park Service considers rock climbing to be a legitimate recreational and historical activity at Devils Tower. This can be a dangerous activity. There have been five climbing fatalities since 1937. Three of them occurred while descending (rappelling) from the tower.

Although early rock climbing techniques have left an indelible, though slight scar, contemporary rock climbers leave little trace of their ascent. Today, most climbers rely solely on their physical strength in order to make a climb. The modern technical equipment that is used for safety is designed to be efficient, removable, and non-damaging. Pitons, the steel “pegs” that were historically hammered into cracks, have been retired from use.

Native Americans have expressed concerns over recreational climbing at Devils Tower, some perceiving climbing on the tower as a desecration to their sacred site. It appears to many American Indians that climbers and hikers do not respect their culture by the very act of climbing on or near the tower. June is a culturally significant time when many, but not all, traditional Indian ceremonies are held at Devils Tower. The Park Service has advocated a voluntary climbing closure during this time to promote understanding and encourage respect for the culture of Native American tribes who consider the tower a sacred site. Although voluntary, this closure has been very successful, resulting in an 80% reduction in the number of climbers during June.

For visitors who prefer a less strenuous visit to Devils Tower, an improved trail just over a mile-long circles the base, offering numerous viewpoints that provide stunning photo opportunities. The park’s Visitor Center has displays on the history and geology of Devils Tower, and park rangers present several interesting programs throughout the day. The park has a rather small parking lot, and access with a large RV could be difficult, especially during busy periods. However, there is a campground just outside the park’s boundary, which makes a good base for exploring the tower and surrounding area.

Admission to Devils Tower is $15 per person for a 1-7 day pass or $25 for a 1-7 day vehicle pass. All National Parks Passes are accepted. For more information, call (307) 467-5283. Devils Tower National Monument Visitor Center is currently closed for the winter but will reopen in early March. Meanwhile, access to the park will remain open during this time.

Thought For The Day – I wonder who Pete is and why do we do things for his sake.