After driving my Mustang to Daytona Beach a few days ago and some running around I did yesterday in it, it now has 840 miles on the odometer. So I was a little distressed to find rust on one of the bolts that holds the driver’s side door hinge to the car. 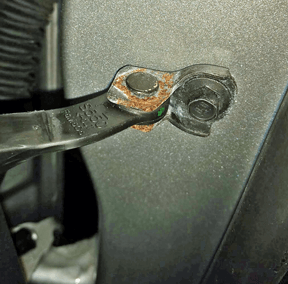 It lives in the garage, and even though we’re close to the Intercoastal Waterway, neither Terry’s van, which we bought in October of 2017, nor my pontoon boat, which has been in the salt water, have any rust on them.

So yesterday I took it back to Mullinax Ford, where I bought it, and showed it to Jack Tuthill, the salesman who handled the transaction. Jack is a great guy, not pushy at all, and really believes in taking care of the customer both before and after the sale. He took a picture of the hinge and went in and talked to the service department and got me scheduled to bring it in on Thursday to take care of the problem. It’s a minor thing, but there’s a reason they call rust cancer. Once it starts, you need to get rid of it as fast as possible.

While I was at the dealership, I looked at new Ford Explorers. Our trusty old 2005 Explorer has 141,000 miles on the odometer, not counting another 80,000 miles or more that it was towed behind our motorhome. It still runs great and it’s our daily driver, but if I ever did replace it, I thought I would buy a new Explorer. That’s not going to happen anytime soon, but because Sheriff Jim Weber in my Big Lake mystery novels drives a newer Explorer, I just wanted to get a feel for what they are like. Did you know the Ford Explorer is the number one selling police car in America these days?

Jack is not a pushy salesman at all, which is why bought my Mustang from him in the first place. I mentioned that I didn’t really like the body design of the new Explorers, preferring the more squared back-end of the one I have. That’s when he showed me the new Ford Expedition. Now that’s an amazing vehicle! If we would have looked at those before we bought Terry’s Chrysler Pacifica, we might have gone that route instead.

But what really grabbed me at Mullinax yesterday was this 1960 Ford Galaxy. I had a car exactly like that when I was in high school, even the same color, and I think the interiors were the same. The only difference was that mine was the old three on the tree standard shift, and this one is an automatic. It’s been in the same family forever and a photo album on the front seat included the original sales paperwork, owner’s manual, and receipts for work done on it over the years. It’s not show room perfect, but it’s very nice. Being an old car guy, I kind of keep up with prices, and this one is a heck of a deal. 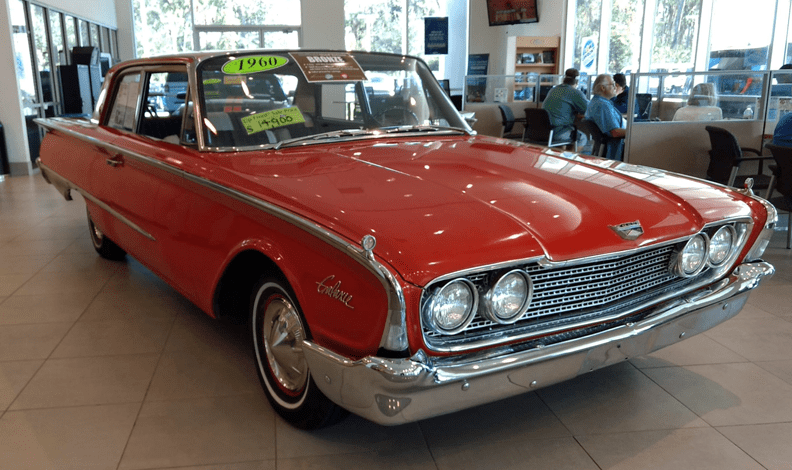 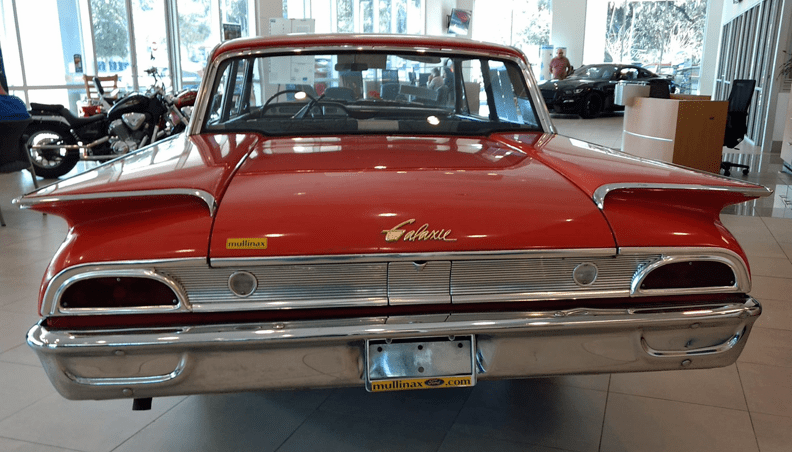 I took a couple pictures of it and sent them to Miss Terry and told her I really needed that car. I didn’t even hint that our 22nd wedding anniversary is coming up in a couple of weeks, but she merely wrote back and said “then you should have it.” I do love that woman of mine. But then she took the wind out of my sails when she asked what was going to come out of the garage to make room for that car. Well, I know it’s not going to be my Mustang or my pontoon boat, and I’m just as sure that it’s not going to be her van. Honey, we’re gonna need a bigger garage!

Over 90 people have entered our latest Free Drawing. This week’s prize is an autographed copy of Big Lake Blizzard, the fourth book in my Big Lake mystery series. This copy has the original cover, before I commissioned Elizabeth Mackey to design all of my book covers. To enter, click on this Free Drawing link or the tab at the top of this page and enter your name (first and last) in the comments section at the bottom of that page (not this one). Only one entry per person per drawing please, and you must enter with your real name. To prevent spam or multiple entries, the names of cartoon or movie characters are not allowed. The winner will be drawn Sunday evening. 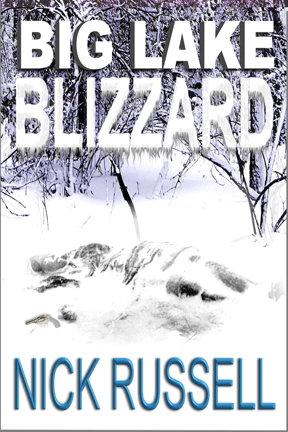 Thought For The Day – I got my father’s weak chin, receding hairline, and big ears. It was the strangest will reading I have ever attended.