Note – This story is from my book Highway History and Back Road Mystery.

RVers hanging out in Quartzsite, Arizona enjoying the sunshine and camaraderie of dry camping in the desert may not know that they are close to a reminder of the Old West that many probably never heard of.

In a tiny cemetery just off the main drag in Quartzsite, a monument recognizes one of the strangest experiments ever conducted in the American West, and the man who was instrumental to that experiment.

In the early decades of the 1800s, the United States Army was attempting to chart the vast and wild Arizona Territory to prepare it for settlement. Secretary of War Jefferson Davis, who would later become President of the Confederacy during the Civil War, approved a plan to experiment with using camels as beasts of burden, as they were in other areas of the world.

Two boatloads of the animals were delivered to Texas in February, of 1856, then transported to Arizona. With the camels came a Syrian camel driver named Hadji Ali. Since the camels were not trained to understand English, and none of the Army’s mule skinners could speak Arabic, Hadji Ali quickly proved his worth. He was a friendly fellow and always eager to please. The soldiers affectionately changed his name to Hi Jolly.

In 1857, a former Navy officer turned Army man, Lieutenant Edward F. Beale, was responsible for laying out a wagon route through the Arizona desert from Fort Defiance to California, and the camels were attached to Beale’s expedition.

Whether the camel experiment would have been successful will never be known – the beasts were too cantankerous to suit Army tastes, and the outbreak of the Civil War drew interest and military resources away from Arizona. Most of the Army went east to fight in the war, and the camels were turned loose in the desert to fend for themselves. For years they roamed in the area around Quartzsite until they finally died off. Hi Jolly never returned to his homeland. He remained in Arizona, where he did some prospecting and lived out his days around Quartszite.

When he died, a pyramid-shaped monument was erected to the camel driver who was a friend to many in the desert. Besides his monument, Hi Jolly was honored in a song by the New Christy Minstrels in the 1960s. 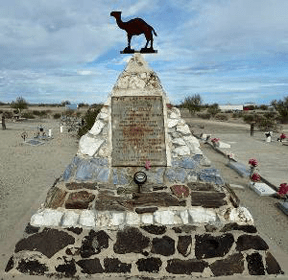 You can visit Hi Jolly’s monument in Quartzsite by turning north from the main street, across from the Pilot truck stop. There is a large parking area near the cemetery where you can park while you pay your respects to Arizona’s resident camel jockey.

It’s Thursday, so it’s time for a new Free Drawing. This week’s prize is an audiobook of The Hot Seat, Bullet Books Speed Reads #4 by Manning Wolfe and Mark Pryor. It’s the story of a British transplant law professor to Duke University who is asked by a former student to second chair the defense on a death penalty case that gets more complicated as other suspects emerge. Bullet Books are speed reads for the busy traveler, commuter, and beach-goer, all original mysteries and thrillers by your favorite authors that can be read in two to three hours. To enter, click on this Free Drawing link or the tab at the top of this page and enter your name (first and last) in the comments section at the bottom of that page (not this one). Only one entry per person per drawing please, and you must enter with your real name. To prevent spam or multiple entries, the names of cartoon or movie characters are not allowed. The winner will be drawn Sunday evening. 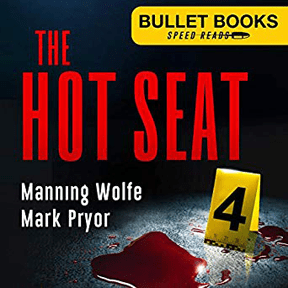 Thought For The Day – Don’t forget to drink plenty of water and get lots of sun. You’re basically a houseplant with complicated emotions.