I’m back with more questions from blog readers about RVing, what’s happening in our lives since we hung up the keys, and all kinds of other things. While I try to answer all questions individually, I also share them here occasionally. These are some that have come in since the new year began.

Q. This is our first year as snowbirds and our first New Year’s Eve in our fifth wheel. We are parked in a friend’s driveway in Albuquerque and all night long we were terrified because people were shooting guns up in the air all around us. The next day our friend, who is very smart about a lot of things, laughed at us and said there’s no way a bullet that someone fired up in the air is going to come down and go all the way through the roof of an RV. Does he know what he is talking about or were we right to be afraid?
A. Your friend may know a lot of things, but he obviously knows nothing about guns and bullets. Every year people are seriously injured and even killed by falling bullets. Sometimes those bullets are fired a mile or more away. And yes, they can come through an RV roof with no problem. We had friends who worked at a Camping World years ago and when they returned to work after New Year’s they discovered a bullet on the floor of a motorhome that was parked inside the service bay overnight. That’s right, the bullet not only came through the roof of the building, but also through the roof of the motorhome. Anyone foolish enough to fire a gun into the air at any time for any reason should never be allowed to be anywhere near one.

Q. My husband wants to get a tire pressure monitor for our motorhome and the small car we tow behind us. He’s a gadget guy like you, Nick, and I wonder if we really need something like that or if it’s just one more toy to spend money on.
A. I would not consider hitting the road without a tire pressure monitoring system on all wheels of all the vehicles. If you don’t, things like this happen and you never know about it until somebody flags you down to inform you of the damage being done. This was our Toyota pickup, which we were pulling behind our MCI bus conversion when we got a flat tire. I couldn’t feel it while I was driving and didn’t know until someone driving by honking and pointing to get our attention. Before we hit the road again I had a tire pressure monitoring system. 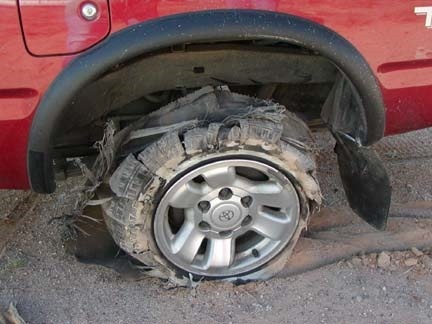 Q. I saw a post you made on Facebook that you had written 8,000 words in one day on your new book, and other comments about 6,000 word days. How do you possibly do that? I have been trying to write a book for the last two years now and I think I’m at 20,000 words. How do you possibly turn out four books or more a year?
A. When I say that I wrote 8,000 or 6,000 or however many words in the day, that’s not exactly true. I don’t sit and type that many words, because I’m a two-finger typist at best. I use Dragon NaturallySpeaking software and either dictate directly into that at my computer, or else I dictate into a digital microphone, which I then plug into the computer and pull the files into Dragon and it’s transcribed into text. As to how I publish four books a year, the secret to that is to like really expensive toys like pontoon boats and new Mustangs and guns and kayaks, and then have to work your butt off to pay for them.

Q. Passport America, a good or bad investment?
A. There’s no way you can go wrong with Passport America. At just $44 a year and with over 1600 campgrounds where you can stay for half-price, it only takes a night or two to get your membership fee back. We are lifetime members, and it saved us a ton of money in our travels.

Q. We are in Casa Grande, Arizona and my husband wants to go to Quartzsite and boondock. People were telling us how much fun it is and I was all for it until someone told me that there are no hookups there where people boondock. I thought they called it that because people are parked out in the boondocks but I never realized they meant without being hooked up. I’m not sure I’m ready for that! Is that true or are they pulling my leg?
A. There are a lot of definitions for boondocking. Some say true boondocking is out in the desert or the national forest or someplace far away from civilization. Other people consider spending the night at a Walmart parking lot or in a friend’s driveway boondocking. No matter where you do it at, the one thing it all has in common is no hookups. But if your RV is self-contained with water tanks and a generator, you have everything you need to boondock for a few days, at least. Try it, you might like it.

Q. We have a 2016 Heartland fifth wheel that is in excellent condition, both inside and out. But my husband has early onset dementia which has forced us off the road. We are trying to sell it, but we are about $15,000 upside down. All we want is the payoff but we’re not having any luck getting anyone to buy it. We are constantly besieged by people calling who want us to put it on consignment or let them sell it for them online. Are any of these people legit? How did you guys sell your motorhome?
A. As they say, the two happiest days in a boat owner or an RV owner’s life are when they buy it and when they sell it. We got many of the same calls from hustlers promising us the world, along with plenty of tire kickers offering to give us a dollar down and a dollar a week. We finally took it to a large dealership in Texas that is known for their consignment sales. It took many months to sell it, and every time we turned around they were calling or e-mailing wanting us to spend money on getting it detailed or getting something else done that was not necessary. When it did eventually sell we got much less than we expected and much less than they promised they could get for it. I suspect you are going to have to spend a lot of your own money just to get out from under the rig.

Q. So did you buy that classic Ford Galaxy you had in the blog a few days ago? You said there was no room in the garage, but from what I have seen in the pictures of your house you have a huge paved parking area and I remember a picture of your motorhome parked there. Does it have to be in the garage?
A. Yes, we have room to park several cars outside, but the Florida sun and heat is terrible on them. I used to keep my 1999 Ford pickup in the garage until I bought the Mustang, but in just one year parked outside, the trim on the truck’s center console and armrests have split and started to come apart.

Q. Nick, we were contacted by a company who wants us to sign up with them to rent our motorhome out. They tell us that by renting it for just a week to 10 days a month we will make enough money to cover the payments. I’m not sure I want strangers that we never met going down the road in our motorhome. Would you do it?
A. Not just no, but hell no! There are many problems associated with something like this. First of all, your insurance may not cover the RV if it is being rented out. Second, whoever holds the loan on the RV may have specified in the contract that is not to be rented. Not to mention the fact that you have no idea how much, if any, experience someone renting it has in driving a large vehicle like a motorhome, if they know how to properly dump the tanks, or if they are jerks who will trash it, leaving you to make expensive repairs or payments on a rig that is destroyed because your insurance company will not cover the damage. I’ve heard of several outfits trying to get people to do this. They make you all kinds of promises about how well it’s going to work out, but at the end of the day you have to decide if you want a nice RV that you’ve taken care of, or a few bucks in your pocket from rental fees that will not cover the damage done to your rig.

Thought For The Day – Expectations are so often just planned disappointments.