Today is a very special day for us. It’s our 22nd wedding anniversary. That’s right, this beautiful lady who shares my life e and makes it better in every possible way, has been putting up with my nonsense for over two decades now. Honestly, I don’t know how or why she does it.

I know I’ve said this before, and some people may or may not believe it, but we are absolutely, deliriously happy together and head over heels in love, even after all this time. More than once we have been in a restaurant and had a server ask if we were on our first date because we are holding hands. No, we hold hands all the time, even when we are asleep.

We never go to sleep at night without saying I love you, and it’s the first thing we say to each other when we wake up in the morning. A couple of times people have called us codependent because we like to be together all the time. Maybe we are, I don’t know. But whatever you call it, it works for us.

Us coming together surprised a lot of people, but I don’t think anybody was more surprised about it than myself and Terry. We had both been in bad marriages and we definitely were not looking to make that mistake again! In fact, when my marriage ended I told all my friends that if I ever said I was going to get married again, to shoot me. I had been shot and married twice before, and trust me, you can get over being shot a whole lot easier than getting over being married. Now my friends joke about the hour and a half I was single. Some people even said we were jumping into it too soon.

The thing is, Terry and I had been friends for a long time before anything developed between us romantically. She advertised the business she ran in my newspaper and I was so impressed with her intelligence and openness that I made it a point to call on her myself instead of sending one of my salespeople. But she always wore a ring on her finger so I just assume she was married, and since I was also married at the time, it was never anything but a friendship.

At some point after my marriage ended, Terry told me that she had been single for 14 years. I asked her about the ring she wore and she said that was just to keep guys from bothering her because she wasn’t interested. In fact, she was so committed to being single that when I told my daughter, who was about 15 at the time, that we had started spending time together, Tiffany said, “She’s gay, Dad. But if anybody could change her mind, it’s you.” And the rest is history.

Here’s a picture of us, 22 years ago today, signing our marriage license. Yeah, I was pretty much bald then, too, but at least the beard was a little bit darker. As for Miss Terry, she was beautiful then and she’s even more beautiful now. 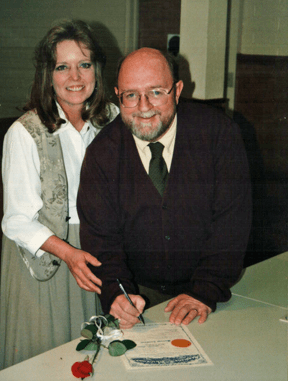 And here’s another one of us on our honeymoon, somewhere on the California coast around Big Sur. I think I’ve gained a few pounds since then. 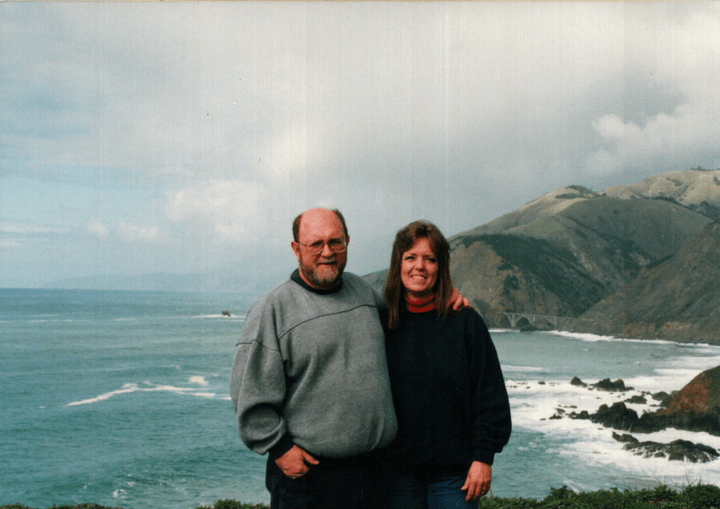 So what are we doing for our anniversary? We’re driving up to the Mayo Clinic in  Jacksonville for Terry’s four week checkup after her InterStim device was implanted. After that, I think we’re going to find some nice place to have dinner, just me and my best friend.

Happy anniversary, Terry. Thank you for 22 wonderful years, and I look forward to spending however many years we have left together. I love you.

It’s Thursday, so it’s time for a new Free Drawing. This week’s prize is an autographed copy of The Ghost At His Back, the first book in my friend Cameron Lowe’s Rankin Flats supernatural thriller series. Cam is a great guy, witty, intelligent, and creative. To enter, click on this Free Drawing link or the tab at the top of this page and enter your name (first and last) in the comments section at the bottom of that page (not this one). Only one entry per person per drawing please, and you must enter with your real name. To prevent spam or multiple entries, the names of cartoon or movie characters are not allowed. The winner will be drawn Sunday evening. 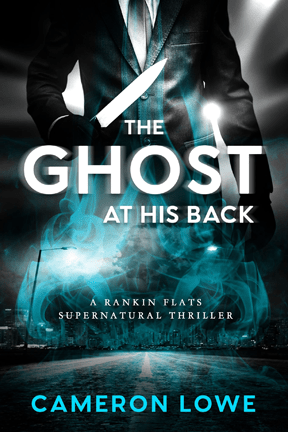 Thought For The Day – A successful marriage requires falling in love many times, always with the same person.