We’ve visited Port Townsend, Washington many times and always enjoy browsing the shops along Water Street and the beautiful views of the mountains and boats on the waterfront, but for some reason we had never stopped to check out Fort Worden State Park. I’m glad we finally did because this historic fort, perched on a point of land jutting out into Admiralty Inlet, is a real gem! 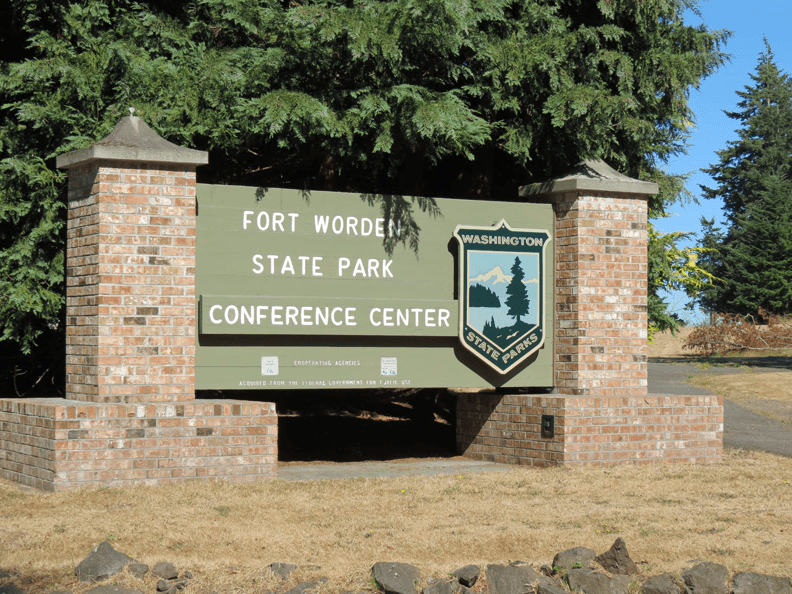 Established in the late 1890s to protect Puget Sound from invasion and attack by enemy ships, the fort was an active military base until 1953. Construction began in 1897 and continued in one form or another until the fort was closed.

Admiralty Inlet was considered so important to the defense of Puget Sound that Fort Worden was just one of three Coast Artillery installations, along with Fort Casey and Fort Flagler, that created a triangle of fire that no enemy warship could survive. Fort Worden was strategically located on a bluff on the Quimper Peninsula, at the extreme northeastern tip of the Olympic Peninsula, anchoring the northwest side of the triangle. The Fort was named after Rear Admiral John L. Worden, who commanded the ironclad USS Monitor during the Civil War. 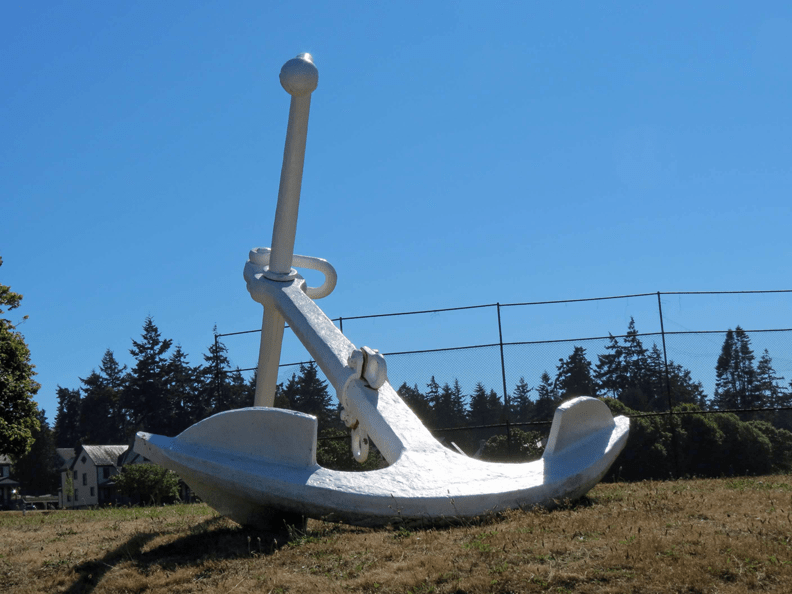 Fort Worden was the headquarters of the Harbor Defense Command of Puget Sound and was garrisoned with four Coast Artillery companies. It was also the home of the 6th Artillery Band.

During World War I, the complement at Fort Worden swelled as soldiers arrived for training prior to being sent to fight in Europe. To keep up with the growing demand, construction of new barracks and administration buildings continued throughout the war. All but five of the fort’s artillery pieces were shipped overseas.

After World War I ended, activities at the fort were cut back as new technology such as aircraft and balloons took a more active role in our defensive strategy, diminishing the role of coastal artillery. In the 1920s, a hangar was built at Fort Worden to accommodate the huge patrol balloons coming into use.

Fort Worden remained the headquarters of the Harbor Defense Command during World War II and it was home to both Army and Navy personnel. Army troops operated radar sites and coordinated Canadian and U.S. defense activities in the Strait of Juan de Fuca and Puget Sound. Sailors were charged with identifying all ships entering and leaving Puget Sound and monitoring underwater sonar equipment. Recognizing the need to change with advancement in technology, most of the fort’s gun emplacements were modified for anti-aircraft guns, replacing the outdated coastal artillery pieces.

Fort Worden and her two sister forts never fired a hostile shot at an enemy target, but there is no question that their very presence played an important role in the region’s defense.

After World War II ended Fort Worden was used for training a variety of military personnel until it was closed in 1953, when Harbor Defense Command was deactivated. In 1957, the property was purchased by the State of Washington and was used as a diagnostic and treatment center for troubled youths. Fort Worden became a state park in 1973.

Today visitors can tour the old fort, whose barracks and buildings have been preserved. If you get a sense of déjà vu, it may be because the 1982 movie An Officer and a Gentleman, starring Richard Gere, Debra Winger and Lou Gossett, was filmed here. 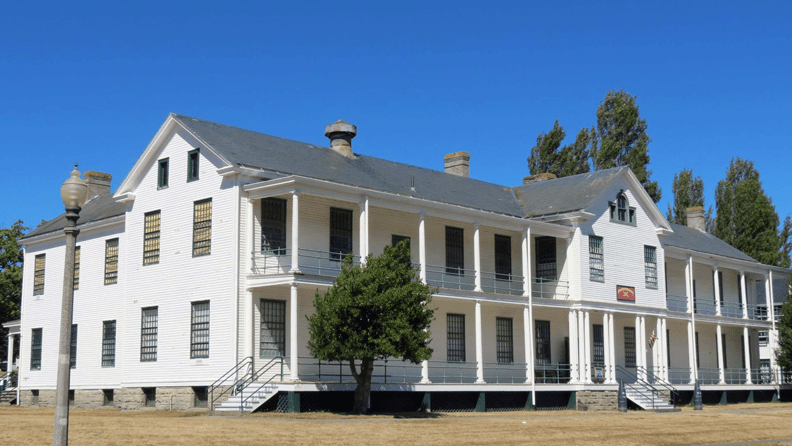 The park is home to the Coast Artillery Museum, which tells the story of the Coast Artillery, with emphasis on the harbor defenses of Puget Sound from the late 1800s to the end of World War II. The museum is open daily from noon to 4 p.m. 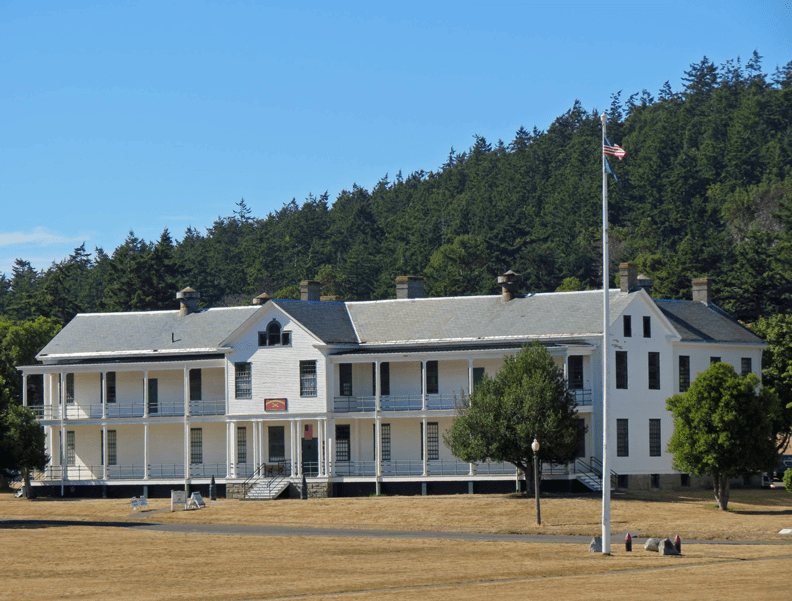 The former Commanding Officer’s Quarters, which was built in 1904, was home to 33 families during the fort’s active duty. The building has been restored and furnished to reflect the Victorian period from 1890 to 1910 to give visitors an idea of what life was like for an officer and his family. Tours of the house can be arranged by calling (360) 344-4400.

Many historic buildings remain at the old fort, including Alexander’s Castle. John B. Alexander, who served as rector of St. Paul’s Episcopal Church in Port Townsend from 1882 to 1886, built the brick structure as a home for himself and his intended bride, but when he traveled to Scotland for the wedding, he discovered she had already married another man. Brokenhearted, he returned to Port Townsend alone and lived in his “castle” for a short time. In 1897 he sold the building and surrounding ten acres to the federal government when construction of Fort Worden began. Alexander’s Castle is the oldest building on Fort Worden, and while the fort was active it was used as living quarters, an observation post, and tailor shop. 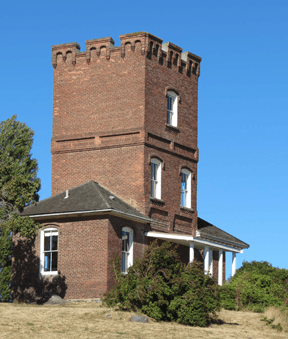 In addition to the historic buildings, the park also includes beaches, hiking trails, a kayak rental, and historic Point Wilson Light. Entering service in 1879, the original lighthouse was replaced with the current structure in 1914. The tallest lighthouse on Puget Sound, it was automated in 1976 and is no longer open to the public. A small military cemetery is located at the south side of the state park. 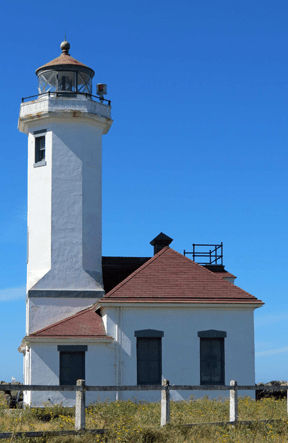 Fort Worden has two campgrounds, with 80 campsites that may be reserved up to one year in advance. Both campgrounds have restrooms with showers. Beach Campground has 50 full hookup RV sites tucked between the bluffs and the beaches of Point Wilson. The sites are level, roomy, and have an amazing view of the Strait of Juan de Fuca. Upper Campground has 30 sites with water and electricity, and a dump station. Though it is heavily forested, sites are long enough to accommodate most RVs. Upper Campground provides easy access to miles of hiking trails. The campsites are popular year-round and reservations are highly recommended. For reservations, call (360) 344-4431. 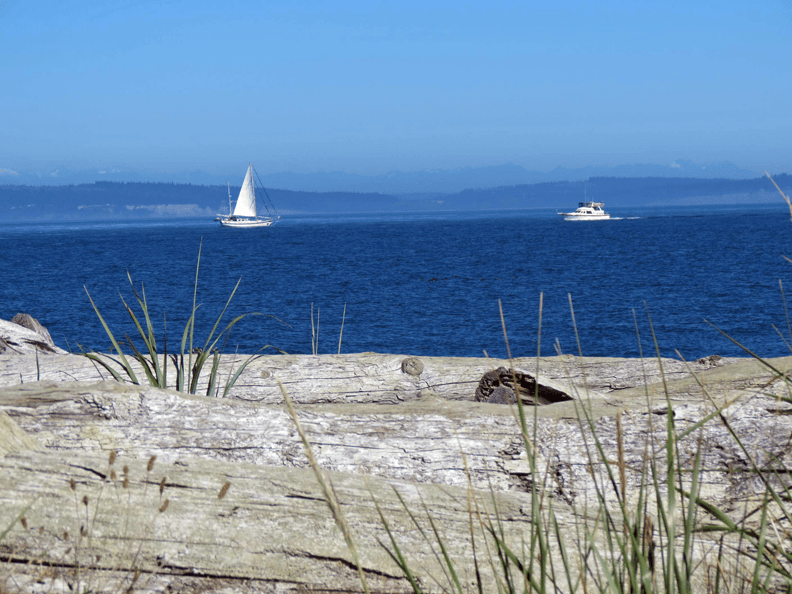 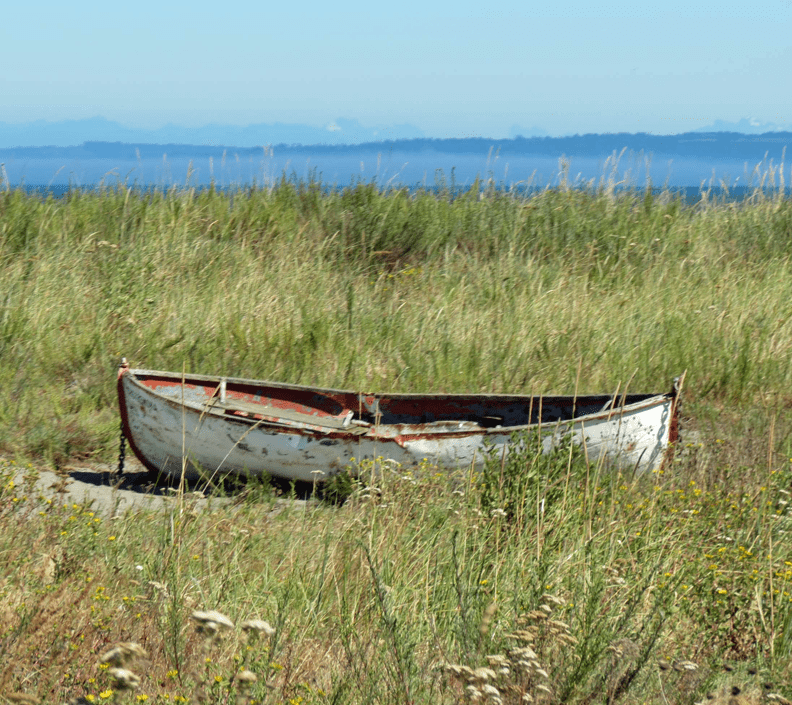 It’s Thursday, so it’s time for a new Free Drawing. This week’s prize is an audiobook of The Driving Lesson by my friend Ben Rehder. While Ben writes some excellent, mysteries, including the wildly popular Blanco County series, this tale of a boy and his grandfather on an unplanned road trip across the country is a coming of age story that will tug at your heart strings. To enter, click on this Free Drawing link or the tab at the top of this page and enter your name (first and last) in the comments section at the bottom of that page (not this one). Only one entry per person per drawing please, and you must enter with your real name. To prevent spam or multiple entries, the names of cartoon or movie characters are not allowed. The winner will be drawn Sunday evening. 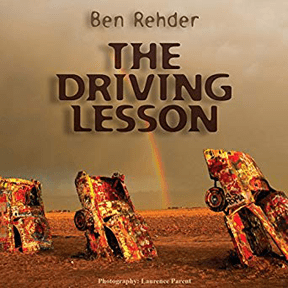 Thought For The Day – Make today so awesome that yesterday gets jealous.