Just a few miles west of the Kennedy Space Center, where America’s rockets lift off to the new frontiers of outer space, you will find a wonderful historical park that celebrates a time in history when Florida was the frontier. It was a time when hostile Indians and the very land itself challenged the survival of the pioneers who lived here.

Fort Christmas Historical Park, in Christmas, Florida, will take you back in time and show you what life was like for the early Florida “crackers” and the soldiers who protected them from the Seminole Indians who resisted the settlers’ encroachment onto their lands. 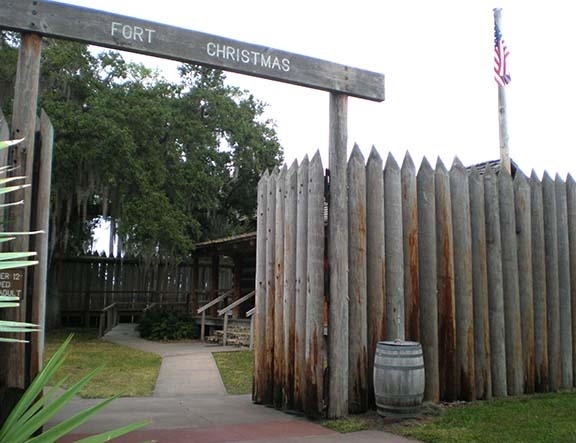 As more and more settlers moved into Florida, there was a growing demand that the Seminoles be relocated to reservations west of the Mississippi River. The Indians resisted, and in 1835 the conflict that became known as the Second Seminole War began.

Major General Thomas Jessup, commander of the military in Florida, ordered a road built south toward the heart of the Seminole country and the establishment of over 200 small forts along that road, to supply the army as it advanced against the enemy.

On December 25, 1837, a force of 2,000 soldiers and Alabama Volunteers arrived in the area to construct an 80 foot square fort, which was aptly named Fort Christmas. The fort included two twenty foot square blockhouses, and didn’t offer much in the way of creature comforts. 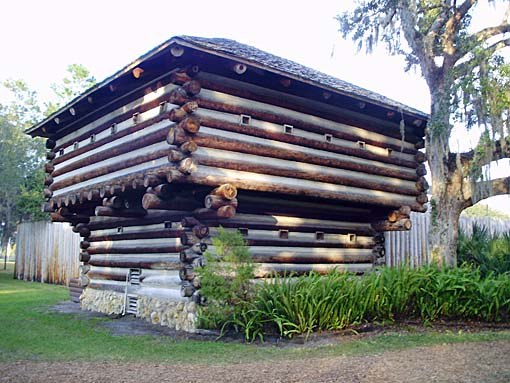 During that time period the United States Army was using Springfield and Harpers Ferry flintlock muskets. These firearms, as well as the Army cannons, used black powder, which presented a danger of explosions. The fort included a below ground powder magazine, designed to lessen the danger in the event of an explosion.

It took a lot of supplies to keep an army going, and the storeroom at Fort Christmas was filled with rations such as salt pork, dried beef, corn, beans, rice, and coffee, along with staples such as salt, brown sugar, molasses, and vinegar. In addition to foodstuffs, the storerooms held shovels, axes, hatchets, and other tools, as well as uniforms, weapons, and medical supplies.

General Jessup led his forces south from Fort Christmas in early January, 1838, searching for the elusive Seminole. But Fort Christmas was short-lived. By the end of the month, General Jessup had realized that it was quicker and easier to resupply by water, and boats began carrying troops and equipment south on the Saint Lucie River. Fort Christmas was abandoned by March, 1838. The local settlers quickly scavenged the fort, carrying away timbers and lumber to build their houses.

In 1976-1977, the fort and stockade were reconstructed by the Orange County Parks Department as a bicentennial project. The original fort was located on a small creek a mile north of Fort Christmas Historical Park. The reconstructed fort includes blockhouses, a storeroom, exhibits on pioneer and military life, and a video on the Seminole Wars. During our visit to the fort, there was a living history encampment, with people dressed in authentic period clothing, and a demonstration of soldiers firing their muskets. 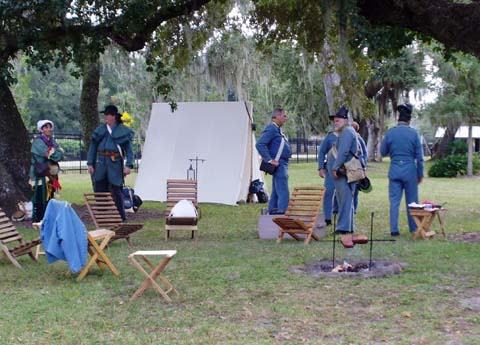 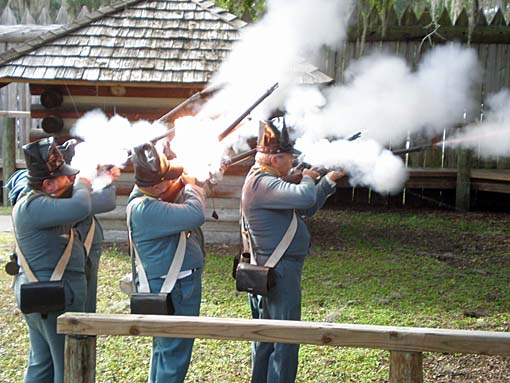 In addition to Fort Christmas, the park is home to seven restored homes and outbuildings that preserve the cracker architecture of the region and give insights into life on the Florida frontier. The houses are furnished with furniture, utensils, and tools, just as they would have been in period from 1870 to 1930. 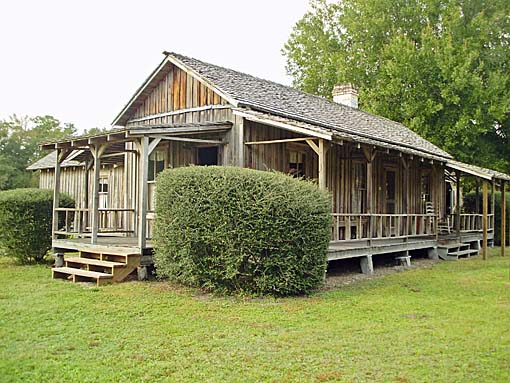 It was a hard life. With no supermarkets and discount stores available to them, people had to improvise to feed and clothe themselves and to get the essentials they needed. Displays at the park reflect homesteading, raising cattle, citrus farming, hunting, fishing, and trapping.

Cattle were an important food and revenue source for the settlers, and they flourished on the grassy prairie lands along the Saint Johns River. The first cattle in Florida were introduced by Spanish settlers, and later Brahmins and other blooded stock helped to improve the herds.

The early settlers practiced open range cattle ranching, allowing their branded cattle to roam without fences. Dogs were used to track and herd cattle on the open range, and the Florida cowboys would crack rawhide whips over the cattles’ heads to get them moving. This was the origin of the term “cracker,” which eventually was applied to all rural southern farmers and ranchers.

Florida provided most of the beef for the Confederacy during the Civil War, and following the war, cattle were herded to railheads, where they were shipped as far away as Chicago and Saint Louis. Cuba was also a major market for Florida cattle. Many of the items on display at the historical park focus on the early cattle industry.

The homes on display at the park range from small one and two room structures where the residents did most of their cooking outdoors or in a separate cook shed, to larger homes with several bedrooms and inside kitchens. Many settlers preferred the separate kitchen sheds because it helped keep their houses cooler, and there was less danger of fires. 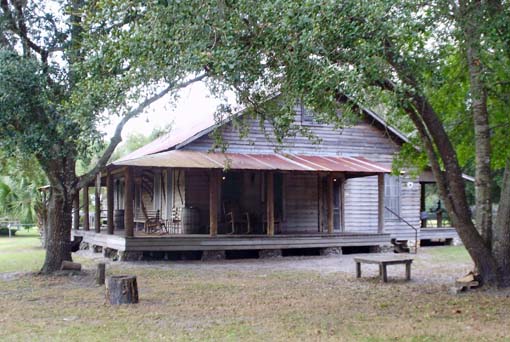 Because there were no electricity or refrigerators, meat was preserved by either packing it in salt or smoking it. Every homestead included a smokehouse, where meat could be kept for several months without spoiling. 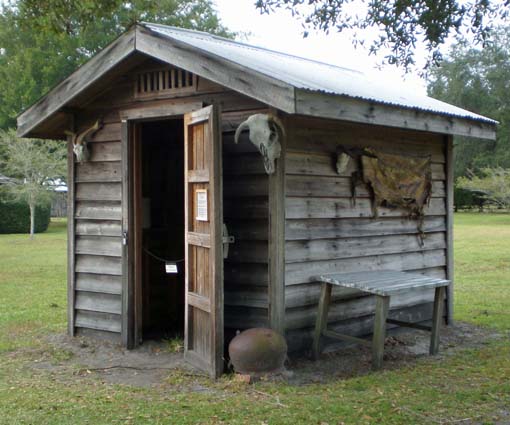 One example of a cracker home is the small one room house that John and Polly Yates built in the 1890s. They converted an old shed into living quarters and did their cooking outside. After John Yates died in 1923, his sons built a kitchen onto the rear of the house. The Yates lived a simple life off the land, raising a few head of cattle, hunting deer, turkey, and wild hogs, and growing a garden.

Other wild game in the area included squirrels, rabbits, raccoon, possum, and alligators. The rivers and streams provided fish and shellfish. No part of an animal was wasted. What couldn’t be eaten by the family was fed to the dogs, of which each homestead had several. The game animals were skinned, and their pelts used to make clothing, tanned for leather, or sold to fur buyers for cash. 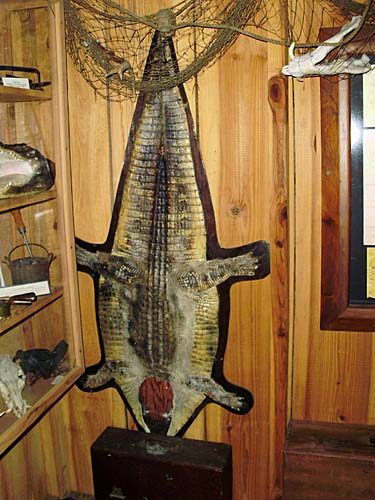 There are three Simmons houses at the park, numbered, appropriately, 1, 2, and 3. The first was a crude cabin and the second is a larger one room house that George Washington Simmons and his wife Ann added on to over the years. They raised eight children here and made their living the same way as their neighbors, farming, raising livestock, and hunting. 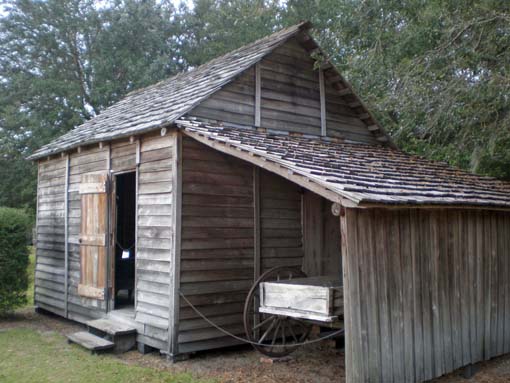 Two of the Simons’ children, George and Martha, never married, and they remained on the family homestead, caring for their parents in their final years. About 1915, George and Martha built Simmons 3 house, which has a center living room, bedrooms on either side, and a separate kitchen.

In addition to the houses and stockade at Fort Christmas Historical Park, visitors can also tour the 1906 Union School, which was originally a one room structure that was enlarged in the 1920s. In isolated communities such as this, the school was also the center of social activities. Community meetings, dances, and special programs were held at the school, and usually attended by everybody in the area. 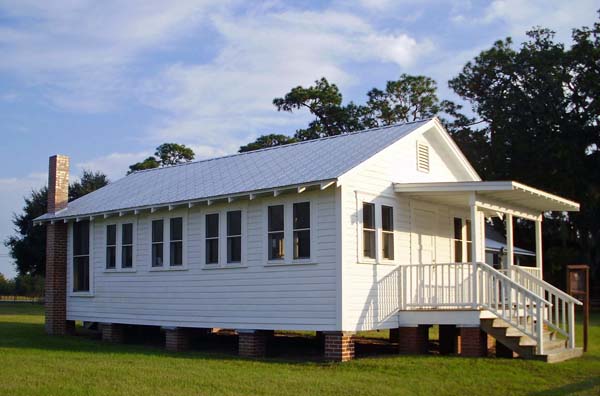 Originally, schoolchildren brought their lunches from home in small baskets or buckets and ate them outside. The school’s lunchroom, which was built next to the main building in the early 1930s, provided shelter from the rain and cold, and included a kitchen where hot meals were prepared.

The park also has a gift shop, where items for sale include pioneer and Native American toys, jewelry, crafts, books, and candy. All proceeds benefit Fort Christmas Historical Park.

The park also has a small playground, restrooms, and picnic tables. There is enough to see and do that you could easily make a day long outing to the park. We enjoyed it so much that we went back a second day!

Fort Christmas Historical Park is located a few miles west of Titusville, Florida, in Christmas, Florida. From State Route 50, turn north on County Road 420 (Fort Christmas Road) for less than a mile. The fort is on the left (west) side of the road. The parking lot could accommodate a medium sized RV at best, but there are plenty of RV parks in the area where you could leave your rig and drive your tow car or dinghy.

Congratulations Barbara Westerfield, winner of our drawing for an audiobook of The Driving Lesson by Ben Rehder. We had  64 entries this time around. Stay tuned, a new contest starts soon!

Thought For The Day – An apology without change is just manipulation.