Get your mind out of the gutter, that’s not what I mean. Today will be a quickie blog post because we were both worn out last night and I wasn’t up to writing anything more.

We were up early Monday morning to make the 120 mile trip to the Mayo Clinic for the first procedure to implant wires into the nerves in Terry’s lower back to hopefully help regulate her body better and to ease the pain from all of the radiation she got back in 2000 to treat her cancer.

Her procedure took longer than expected, mostly because they got a later start than scheduled. First, they took her back to pre-op and got her ready for the O.R., then I was allowed to see her for a few minutes before they wheeled her away. I think that was harder on me than it was for her. 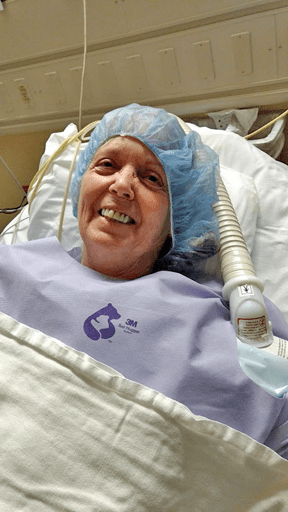 I cannot say enough good about the folks at Mayo. Everyone from the receptionists to theradiation to the volunteers who man the desks in the waiting rooms and keep family members informed on what is going on during a procedure are fantastic. I was given updates at every stage, from pre-op to when the procedure started and its progress, to when it finished and she was in recovery.

It was after 4:30 p.m. when Terry was finally ready to be discharged. But first I had to stop at the in-house pharmacy to get a prescription for pain meds filled. Since it was so late in the day, and because my night vision sucks, we decided to get a room for the night and drive home today.

Thank you to everyone who sent e-mails, text messages, or reached out through Facebook to wish us well and send prayers and words of support. Believe me, it helped both of us. Terry is a bit tender at the incision sites, but overall feels very good, and is very optimistic about this first step toward getting her some much needed and long overdue relief.

Thought For The Day – Why are Zoey and Zoe pronounced the same, but Joey and Joe aren’t?

15 Responses to “A Quickie Today”