While in Ohio researching a new book series, we spent some time at the Toledo Police Museum. This was a place I was especially interested in visiting because of my family’s association with the police department. Though small, the museum’s volunteers have managed to cram a lot of history of Toledo, and specifically Toledo law enforcement history, into the space available.

Created much in part by the efforts of the late Officer Kenneth Deck, the museum was originally housed on the first floor of the Toledo Police Safety Building at 525 N. Erie Street. Unfortunately, the museum closed in 1994 when space was needed for other purposes.

For almost 17 years the museum’s collection of artifacts languished in storage until 2010, when Police Chief Michael Navarre asked the Planning and Research Section of the Police Department to look into reopening the museum. Due to countless hours of volunteer work from active duty and retired Toledo Police personnel, the museum reopened just over a year later in the old Ottawa Park Nature Center at 2201 Kenwood Boulevard.

Today a visit to the museum is like taking a trip back in time to when police officers walked a foot beat and knew every kid in the neighborhood by name. Every kid, not just the troublemakers. I sometimes think that early connection with law enforcement had a lot to do with many kids’ desire to someday wear the same uniform.

Stepping inside the museum, we were greeted by a pair of three-wheeled police motorcycles and an old ‘paddy wagon’ used to transport prisoners to jail. 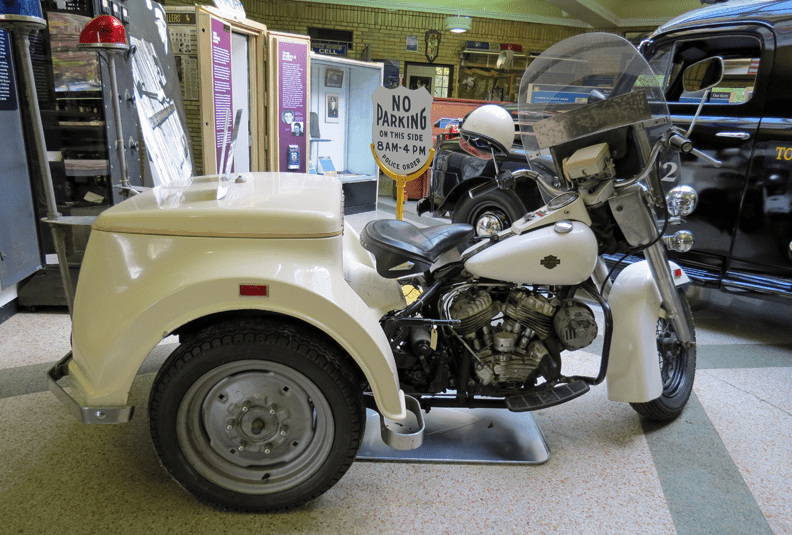 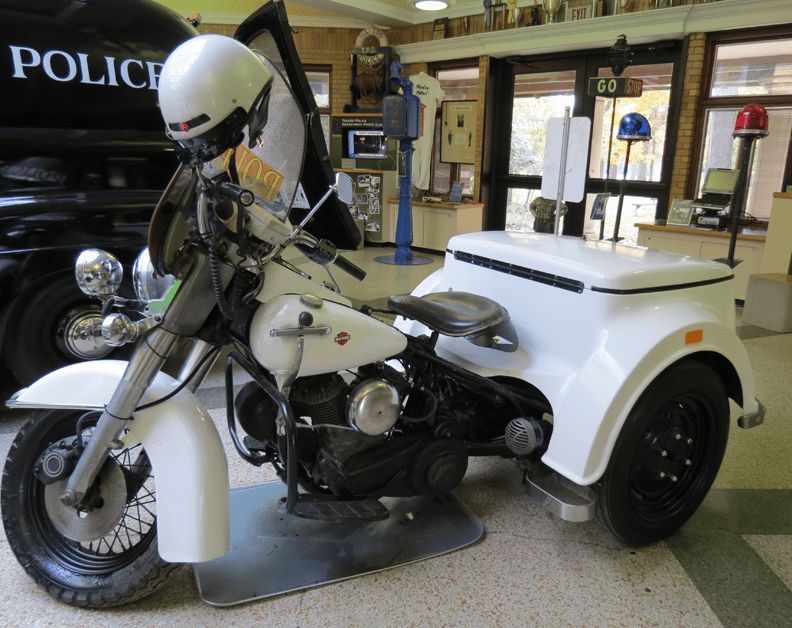 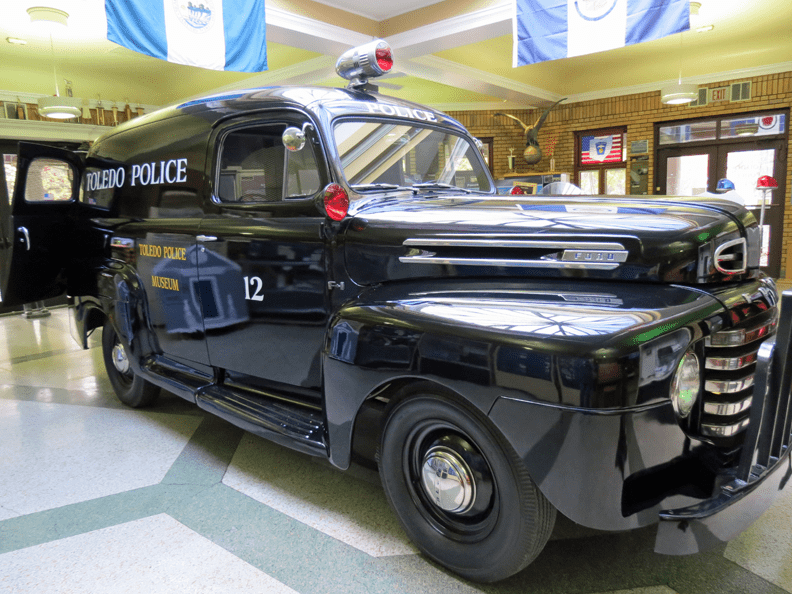 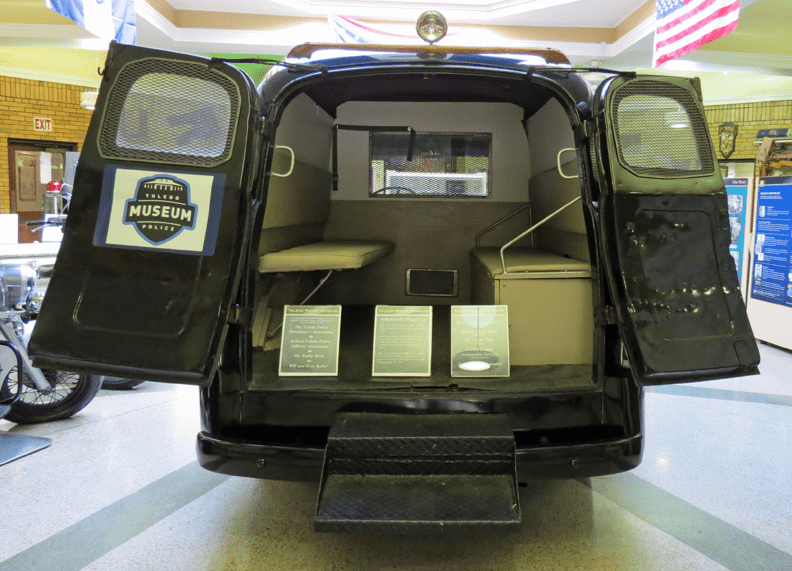 There were so many artifacts on display that I remembered from my years in Toledo, like this old call box, which is how officers communicated with headquarters while on the job. Construction of the Police Alarm Signal System began in 1907 in Toledo, and by 1916 there were 136 Gamewell Police Alarm boxes in service. Eventually the police alarm system would expand to have 1,056 miles of wire, almost all of it underground, serving 248 alarm boxes and 51 auxiliary telephone circuits. Some would be equipped with lights that could be seen at great distances. Call boxes like these have become real collectors’ items, and the museum has a list of all call boxes used in Toledo so collectors can find the location where their box once stood.

Eventually the police department installed radios in all patrol cars, and dispatchers worked at consoles. 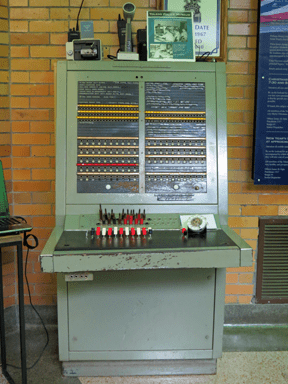 Among the artifacts on display are old wanted posters and mug shots, duty helmets, handcuffs, blackjacks and batons, and even this Drunk-O-Meter, an early-day version of a breathalyzer. The person being tested was required to blow into a balloon, and then the air in the balloon was released into a chemical solution. If there was alcohol in the breath the solution changed color. The greater the alcohol content in the breath, the more the color changed. 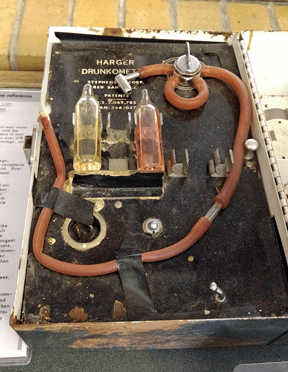 Visitors can get a real criminal experience by having their mug shot taken by the original TPD mug shot camera and then being locked-up in a jail cell. Yes, I had to try out both experiences. 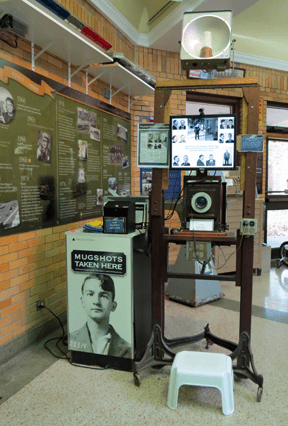 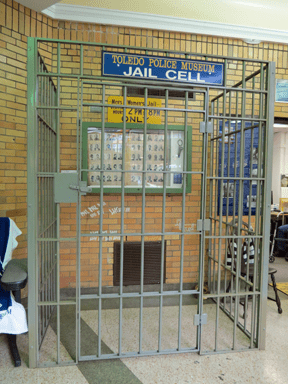 Being a badge collector, I enjoyed seeing the several displays of Toledo Police badges at the museum. 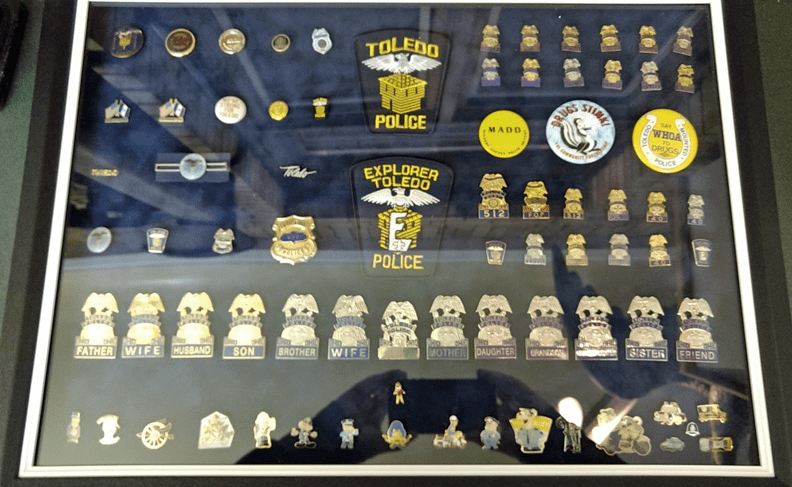 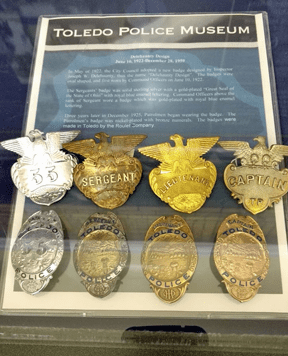 And kids will love these “police vehicles” just their size! 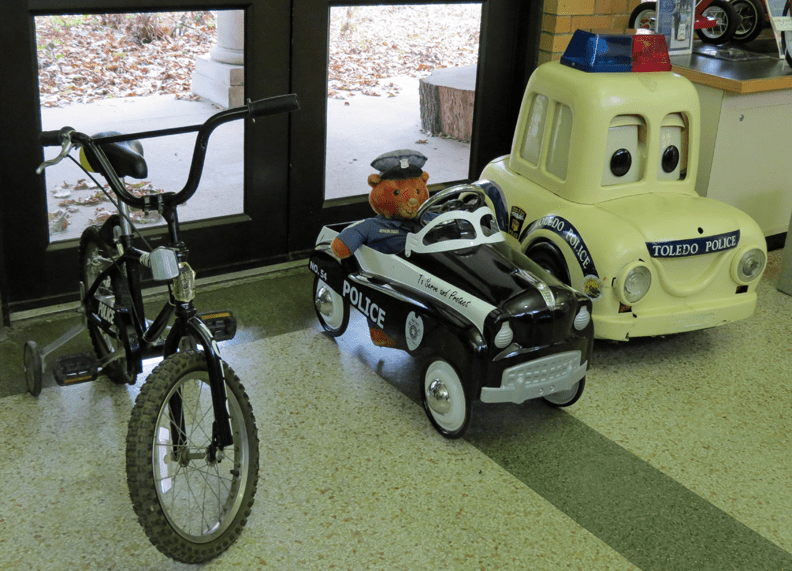 The museum has many interactive displays, along with a timeline highlighting the complete history of the department from its beginnings to the present day. Besides the museum’s excellent permanent displays, rotating exhibits throughout the year feature different sections of the department and officers who served the community.

Congratulations Tom Lemcool, winner of our drawing for an audiobook of my friend Ben Rehder’s Gone The Next, the first book in Ben’s excellent Roy Ballard mystery series. We had 68 entries this time around. Stay tuned, a new contest starts soon.

Thought For The Day – You know it’s going to be a bad day when your imaginary friend files a restraining order.