We were glad we got out of the Midwest when we did because winter arrived about the time we were leaving and followed us, nipping at our heels all the way south. It was in the low 30s when we woke up after our night at the Hampton Inn in Roanoke, Virginia, making us really appreciate the heated seats and heated steering wheel in Terry’s Chrysler Pacifica.

We left the city driving east on US Highway 221, but we didn’t get far before we saw a place called Bargain Barn Fabrics in Montvale and stopped so Terry could see what they had. As it turned out, they had a lot! All kinds of fabrics in every color, weight, and design you could ever hope for. 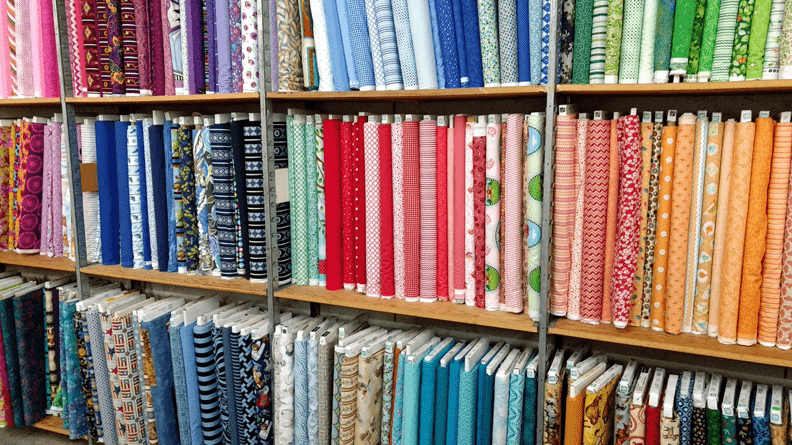 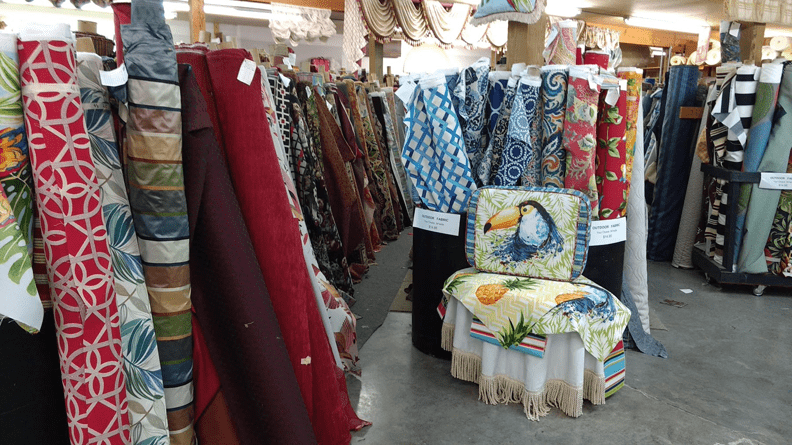 This is a family-owned business and a lovely young woman named Tiara Haley welcomed us and showed Terry around the store a little bit. Tiara is a fascinating woman who spent time in Orlando, Florida working in the costume department at Disneyworld before returning home to Virginia to help her mother Marietta run the store. She told us she learned to sew at a very young age from her mother, whom Tiara obviously adores, and for good reason. It warmed our hearts to see a mother and daughter who work together so well and care so much for each other.

Tiara showed us some beautiful costumes that she created. Obviously, her mama taught her well. 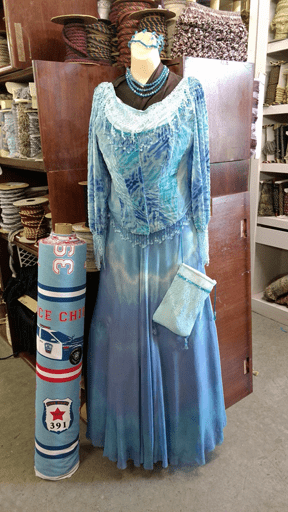 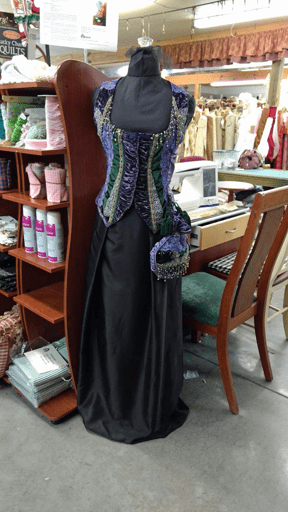 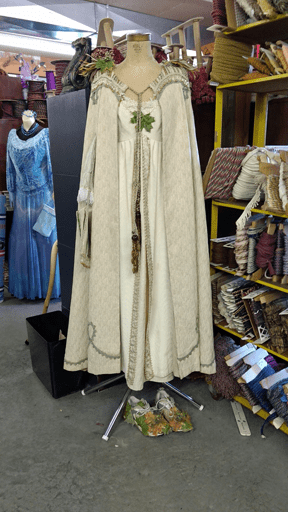 And this is a quilt Marietta made in honor of her brother, who was a gunner on bombers flying missions over Germany during World War II. 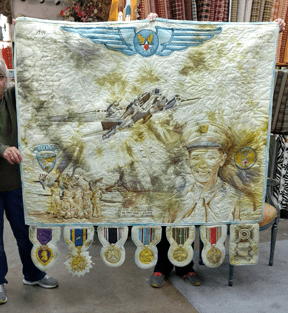 We could have easily spent the day chatting with Tiara and Marietta because they were so friendly and nice but there were a couple of places we wanted to see. So after Terry purchased the fabric she wanted, we said goodbye and headed on down the road.

Our next stop was at the National D-Day Memorial in Bedford, which was a very moving experience. Nineteen young men from the small town of Bedford died during the D-Day invasion in World War II, making it proportionally the town with the most casualties suffered in the fighting. Two more sons of Bedford were killed at Normandy, and yet another two fell before the war was over. What a tremendous toll for such a small, tight knit community. I will have a blog about the memorial soon. 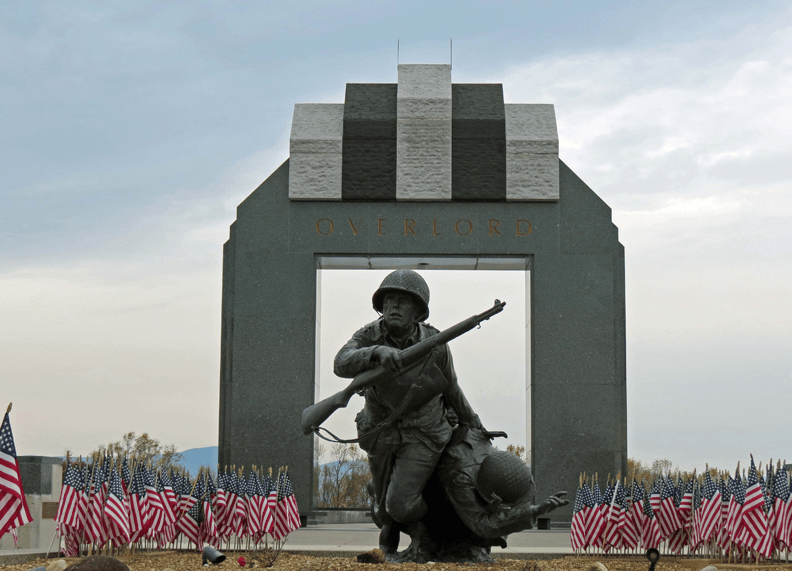 It was getting late in the day by the time we reached Appomattox Court House National Historic Site, but it was well worth taking the time to stop. The long, bloody Civil War ended here, and a video at the Visitors Center tells about how Confederate General Robert E. Lee, with his army surrounded and no way out, made the tough decision to surrender to Union General Ulysses S. Grant, ending the war. Grant, following the wishes of President Abraham Lincoln, accepted the surrender with grace and a spirit of unification rather than punishment for the officers and men of the Confederate Army. I will have a blog about Appomattox coming soon. If you are ever anywhere in the area, visiting both the D-Day Memorial and Appomattox should be on your must see list. 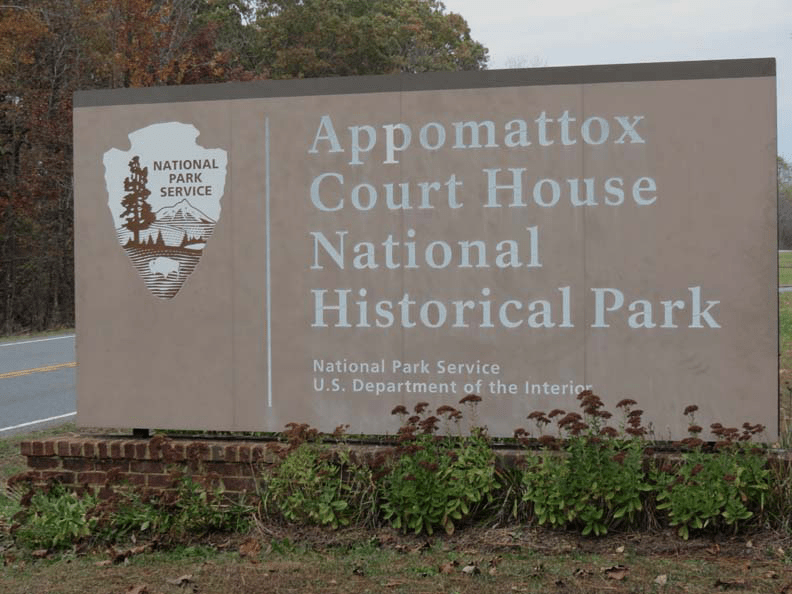 It was getting dark by the time we left Appomattox, so we drove another half hour or so to the college town of Farmville. When I asked Zach, the desk clerk at the Hampton Inn, if he could recommend a place for dinner, he pointed us toward Pizza World in a small strip shopping center across the street. The pizza was delicious and the owner spent some time visiting with us. He is very dedicated to his customers, and if we ever make it back in that direction, we will gladly eat there again.

We only covered 101 miles that day, but that was fine with us. We met some very nice people and saw some interesting things along the way. Isn’t that what travel is all about?

Today is your last chance to enter our Free Drawing for an RV camping journal donated by Barbara House. Barbara makes several variations of these, and they all have pages where you can list the date, weather, where you traveled to and from that day, beginning and ending mileage, campground information including amenities at RV sites, a place for a campground rating, room to record activities, people met along the way, reminders of places to see and things to do the next time you’re in the area, and a page for notes for each day. To enter, click on this Free Drawing link or the tab at the top of this page and enter your name (first and last) in the comments section at the bottom of that page (not this one). Only one entry per person per drawing please, and you must enter with your real name. To prevent spam or multiple entries, the names of cartoon or movie characters are not allowed. The winner will be drawn this evening. 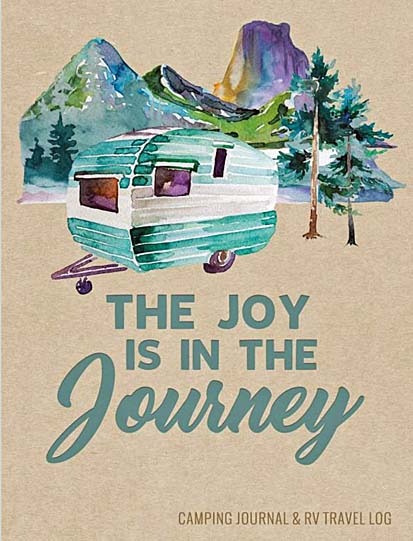 Thought For The Day – Of course I’m an organ donor. Who wouldn’t want a piece of this?