Note: This is the second of three installments about our trip from Florida to Ohio.

After a comfortable night at the Hampton Inn in Athens, Georgia, we took U.S. Highway 441 north, passing through a several small towns and some very pretty countryside. The further north we went, the more the terrain changed, first to rolling hills, then steeper hills as we progressed toward North Carolina. Most of the way it was nice divided four lane highway, with a few two-lane roadways through some of the towns.

We were in Mountain City, Georgia, almost to the North Carolina state line when I saw a sign for the Foxfire Museum & Heritage Center and made a hurried left turn to avoid missing it. It was a good thing we were in the Pacifica instead of our 40-foot motorhome or I’d have never made the turn. And once we started up the side of a mountain on a very narrow, very winding road, I knew we’d have never made it in a big RV! 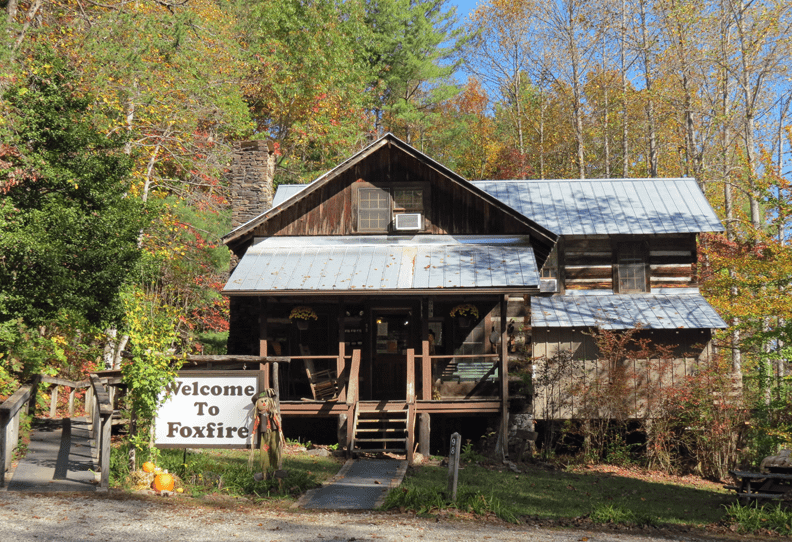 For those who are not familiar with the Foxfire program, it was created to preserve the history and culture of the people of the Appalachian Mountains through books, periodicals, and hands-on learning programs for young people. I have been a fan of the Foxfire books for as far back as I can remember. They cover everything from old time skills like building a log cabin and skinning a hog to mountain recipes and the reminiscences of mountain people of their lives in places many of us will never see.

Eventually we made it to the museum, which consists of a collection of old buildings from throughout the region that were moved there and assembled into a village. We spent a couple of hours exploring the place, talking to the nice ladies in the museum gift shop, and to a woman weaving and another making straw brooms. Before we left, I bought the complete set of Foxfire books, along with several other titles to add to my reference bookcase. I will have a full blog about our visit to Foxfire in the near future. 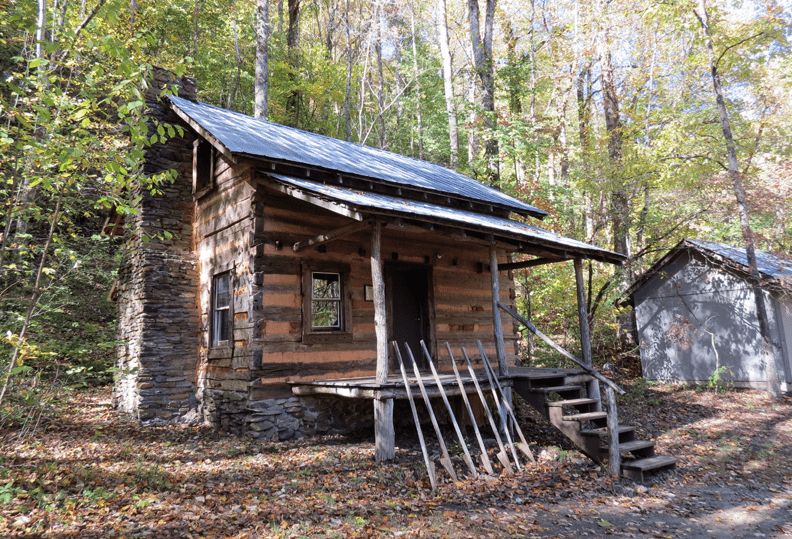 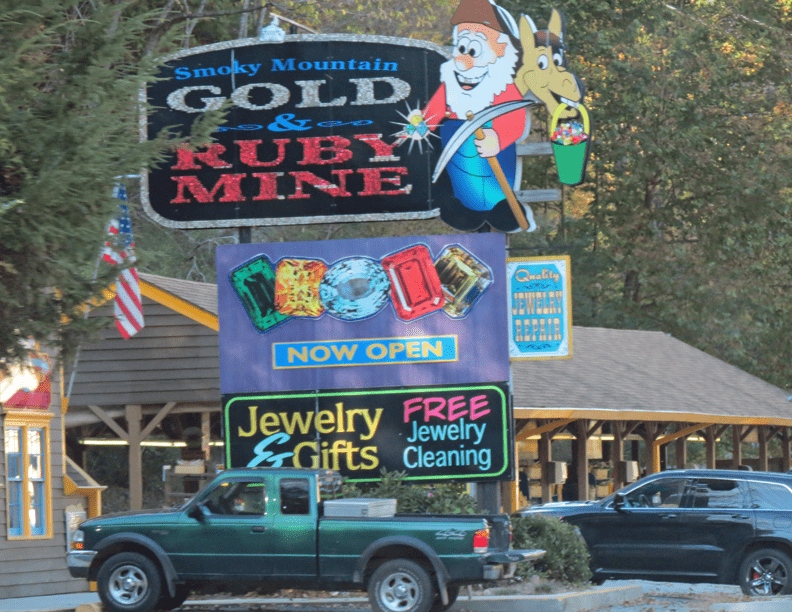 By the time we got to Franklin, North Carolina I was really glad we were not in an RV. The road was narrow, with frequent stoplights and a lot of traffic, which only increased as we got closer to Great Smoky Mountains National Park. But the fall colors were amazing. 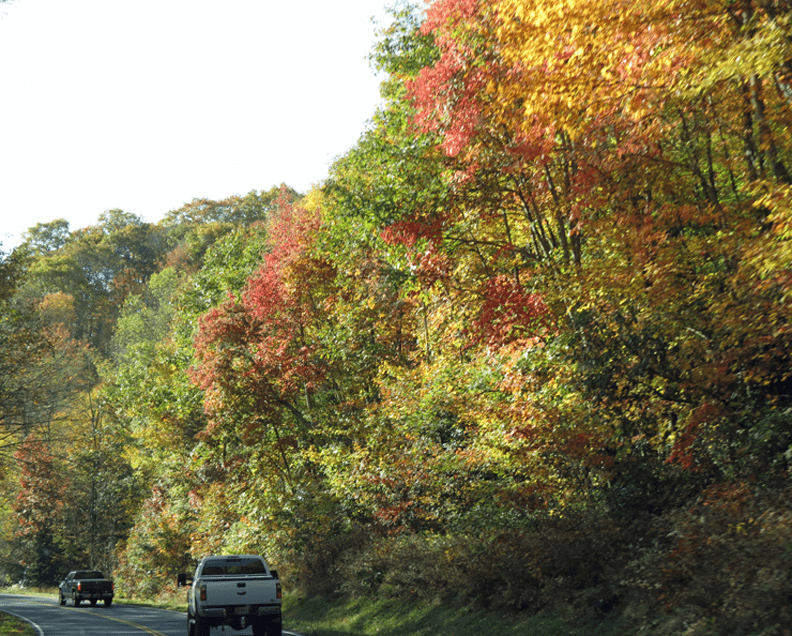 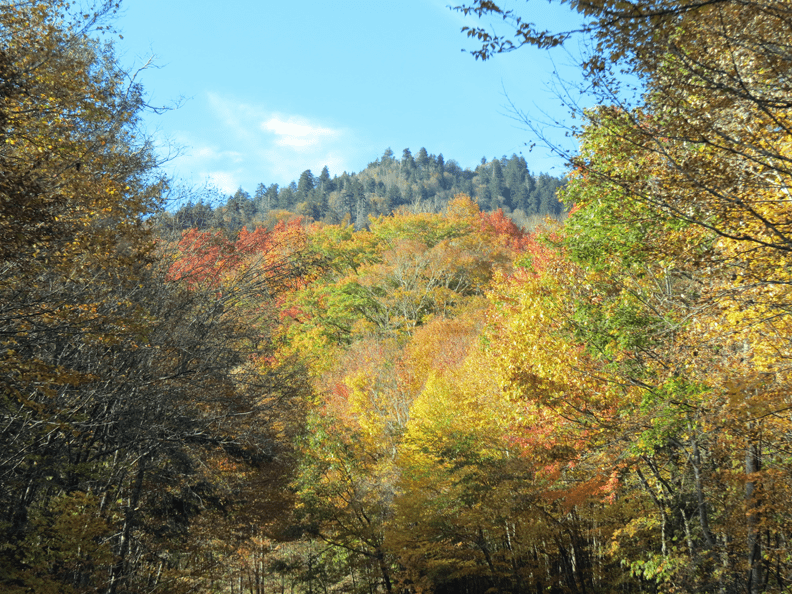 The Museum of the Cherokee Indian is in Cherokee, the gateway to the park, and is well worth a stop. We saw several Native Americans in traditional dress entertaining tourists as they shared some of their culture and sold lots of souvenirs. 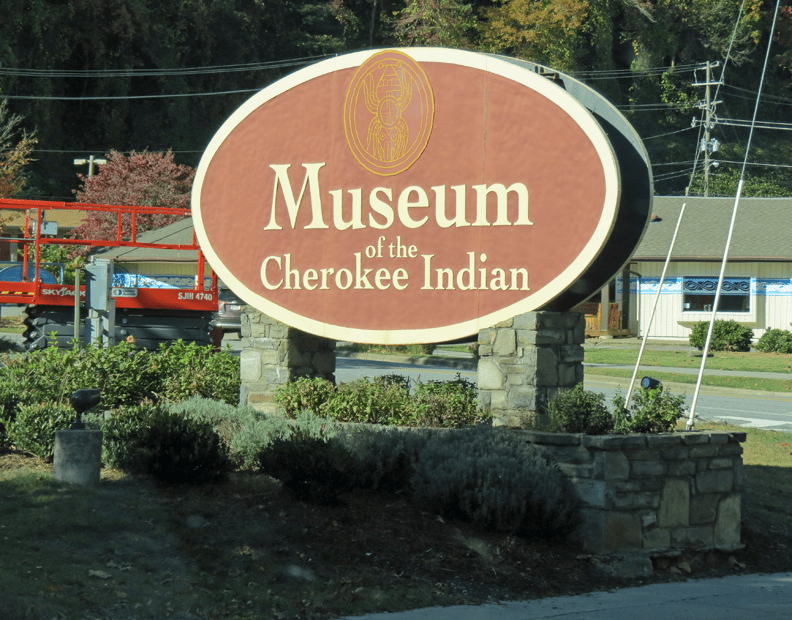 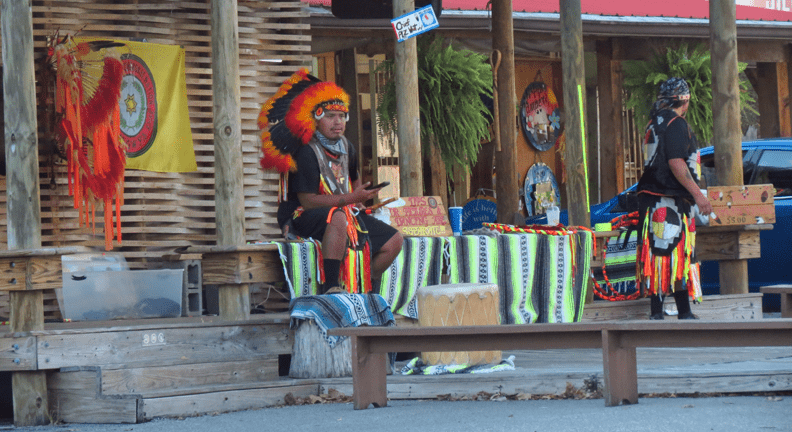 U.S. Highway 441 through the park is a two-lane road with lots of curves. This was about the only empty stretch of road we saw all the way through the park. For most of the trip it was pretty much bumper to bumper traffic, and nobody was in a hurry. 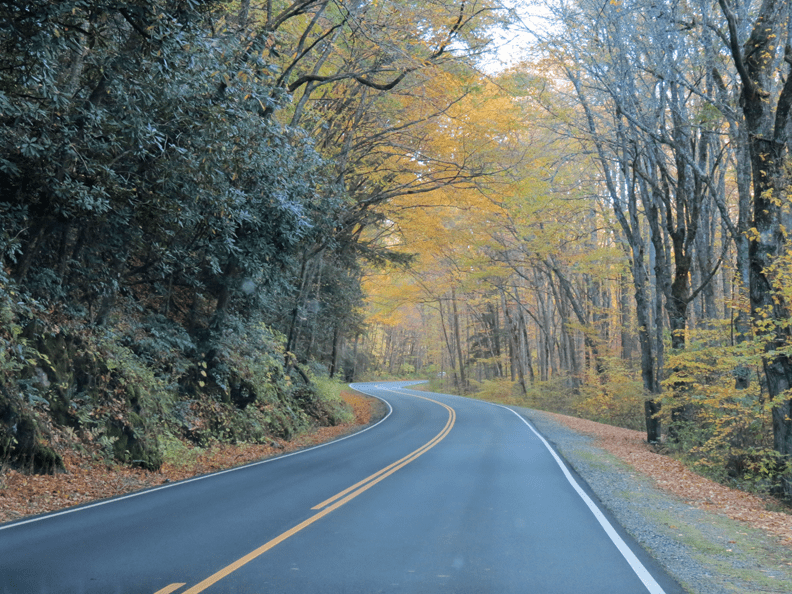 And then we came to the first of several traffic jams. In one of them we moved less than a mile in an hour. Total gridlock like you might expect in Los Angeles during rush hour, but not in the great outdoors. 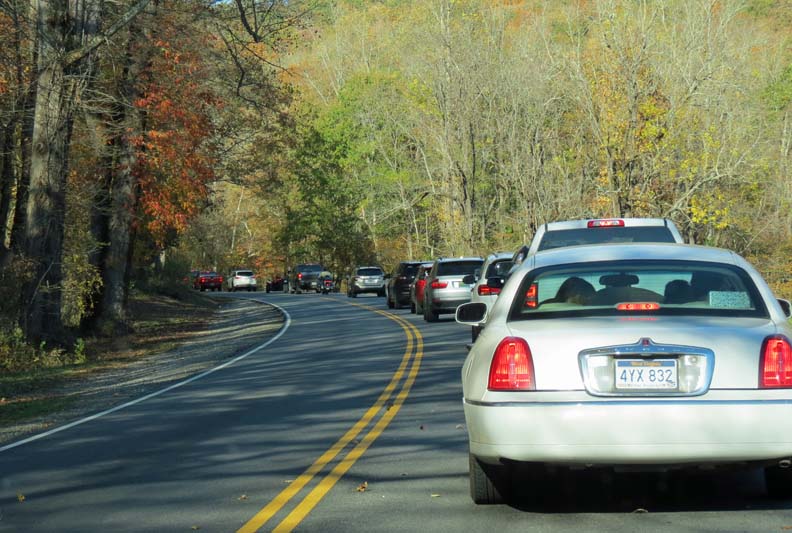 And here is what was causing the traffic jams. Several herds of elk were feeding in meadows along the highway, and apparently nobody had ever seen an elk before. Having lived in the Rocky Mountain West for many years, Terry and I were very familiar with them. 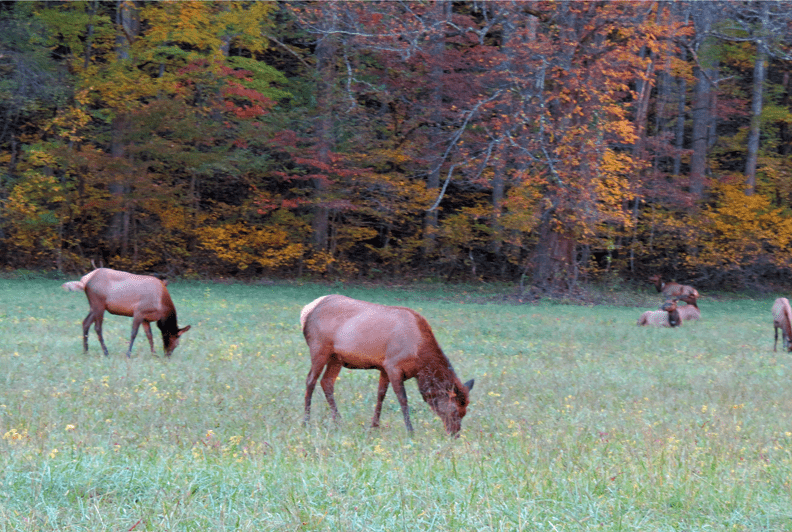 But not the folks in the park. They were parked on both narrow shoulders of the highway as well as right in the middle of the road, jumping out to get a better look and take pictures. Rangers and park volunteers were on hand, trying in vain to get traffic moving and also to keep people from trying to pet the huge animals or pose for pictures with them. What idiots. An elk is as big as a horse and its antlers can impale you in a heartbeat. They are wild animals, but they were acting more civilized than some of the people we saw. 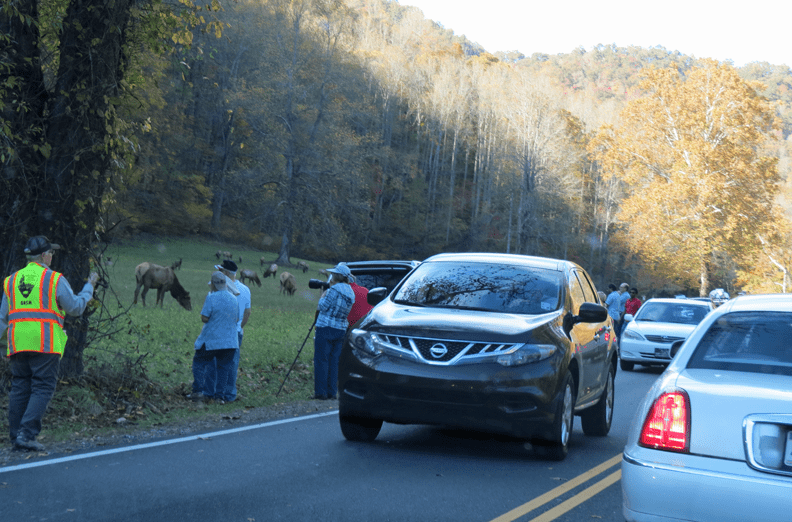 Eventually we made our way to Gatlinburg and Pigeon Forge, where the roads were wider, but traffic was just as bad. The sun was low in the sky and blinding us as we turned west toward Knoxville. We got onto Interstate 75 and took it north about 20 miles to Clinton, where we checked into another Hampton Inn for the night.

This is familiar territory to us, since we often stopped at the Escapees RV Club’s Raccoon Valley Campground, just a few miles south, during our days as fulltime RVers. The hotel is almost next door to Golden Girls, one of our favorite restaurants. Their broasted chicken is delicious and I had missed it, so you know what I had for dinner. And it was just as good as I remembered!

Next up, I will tell you about the rest of our trip to Ohio. Stay tuned!

Thought For The Day – Sorry I acted crazy. It will happen again.