When I was in high school in Toledo, Ohio, the father of one of my friends was a seaman working on freighters plying the Great Lakes. A couple of times when he was in port my buddy and I went down to the ship, a massive freighter, and he gave us a tour. I can still remember the ship’s cavernous holds, the view from the bridge, and the lunch that we had in the mess. Back then I thought there could be no better job in the world than his, and for a while I was enamored with everything about the lakes and the ships that work their waters. For whatever reason, good or bad, my life took a different path. But I still love to read about Great Lakes history, and occasionally explore ships that are open for tours.

It’s probably a good thing that the National Museum of the Great Lakes did not open on Toledo’s waterfront until I had spent my time in the Army and then moved away, because I might have become a sailor after all. 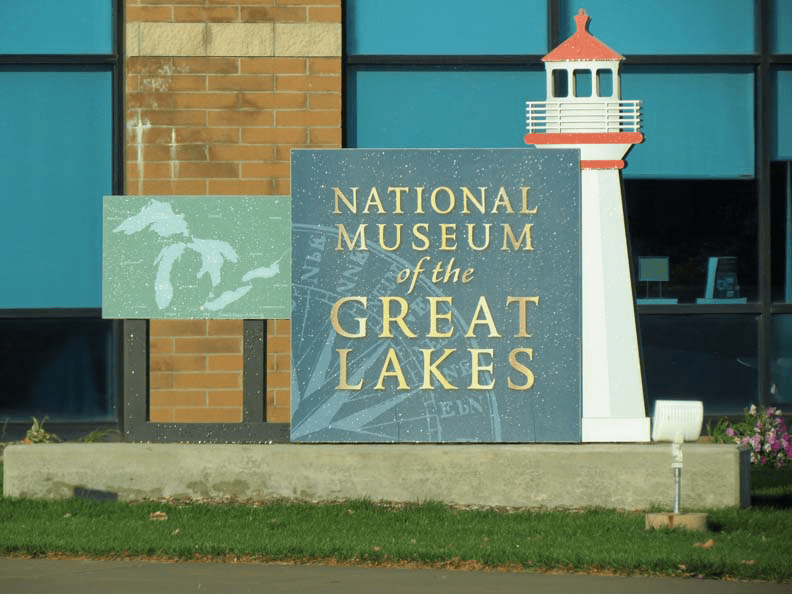 The Great Lakes hold 84% of all of the fresh water in North America and have played an important role in history for thousands of years. Native Americans and fur traders paddled the lakes in canoes, schooners with billowing sales carried passengers and cargo, and steamers and coal-fired freighters hauled huge loads of raw materials, all working the lakes in their own time. Along the way, the lakes also saw Underground Railroad activists spiriting escaped slaves away from a life of servitude to freedom in Canada, and later on rum runners smuggling contraband booze in from Canada during the Prohibition years.

Visitors to the National Museum of the Great Lakes can learn about how the lakes helped shape the history, politics, and culture of the land that surrounds them. Six galleries display over 300 artifacts, a number of audiovisual displays, and more than 40 hands-on interactive exhibits to tell the story of Great Lakes ships and shipping. 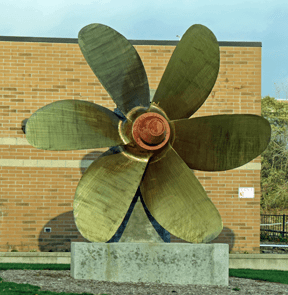 The Great Lakes: A Powerful Force introduces visitors to the five bodies of water that make up the Great Lakes and shows how they have helped shape the entire region surrounding them, both here and across the border in Canada.

The Exploration and Settlement gallery introduces us to the people who made their living from the lakes from the earliest days of history and who went on to create towns and cities on the lakes’ shores and further inland. That story is continued in the Expansion and Industry gallery.

The Maritime Technology gallery covers the evolution of the ships that have worked the lakes throughout history, from the days when a captain stood at a wooden-spoked wheel steering a sailing schooner through waters both calm and hazardous, to today’s modern computer-controlled vessels, and everything in between.

The Safeguard and Support gallery gives details about how technology has helped make life safer for Great Lakes ships and the men and women who work on them, as well as the sub-industries that have been created to support the shipping industry. Everything from how a ship’s crew’s laundry and food are handled, to mail and refueling. 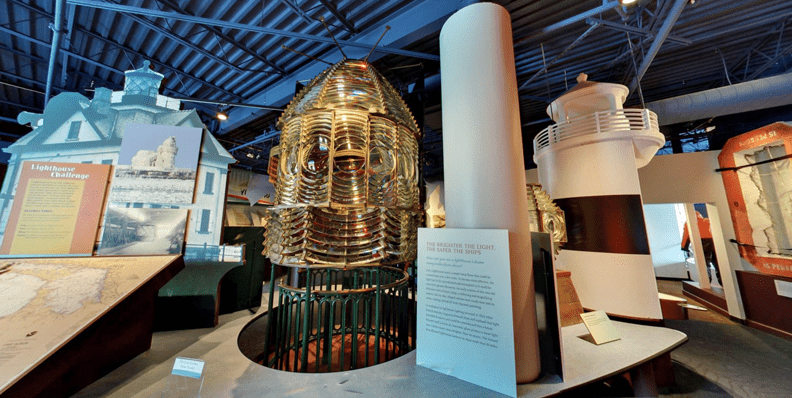 Every sailor who has ever been on the Great Lakes knows that while they are a rich resource in so many ways, the waters can turn deadly in an instant. The accepted figure by most historians is that somewhere over 6,000 ships have sunk and over 30,000 people have lost their lives in the Great Lakes over the years, though historian Mark Thompson claimed in his book Graveyard of the Lakes that there have been 25,000 shipwrecks. I believe that number includes smaller pleasure vessels as well as commercial ships. The Shipwrecks and Safety gallery covers the tragedies that have occurred on the lakes and what has been done to avoid them, or to save the lives of sailors in the worst event. 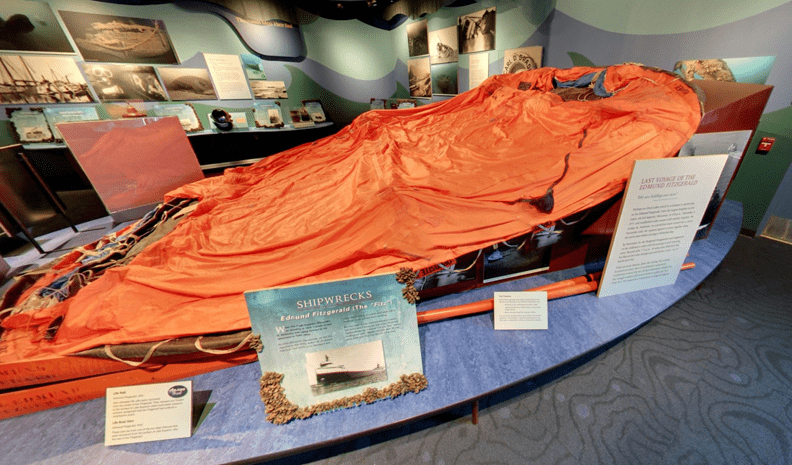 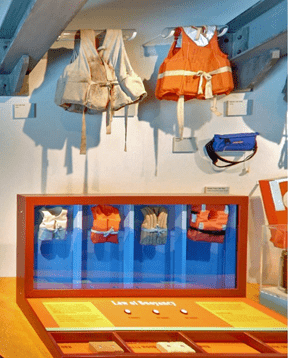 Moored on the Maumee River just outside the museum are two examples of Great Lakes working vessels. The Colonel James M. Schoonmaker Museum Ship was built at the Great Lakes Engineering Works in Ecorse, Michigan and launched on July 1, 1911. The flagship of the Shenango Furnace Company, she was the largest ship operating on the Great Lakes at that time and quickly earned the title “Queen of the Lakes.” She carried a larger cargo more quickly than any other ship around, setting innumerable records for the amount of coal, iron ore, and grain delivered. 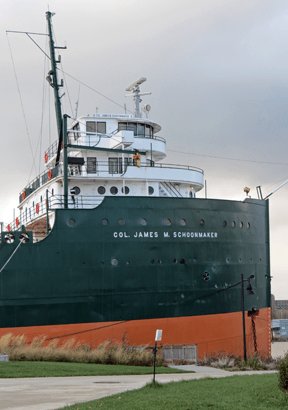 From May through October, visitors to the museum can take a self-guided tour of the Schoonmaker, admiring the crew’s cabins, the control room, and standing on the deck being amazed at how massive the ship is. 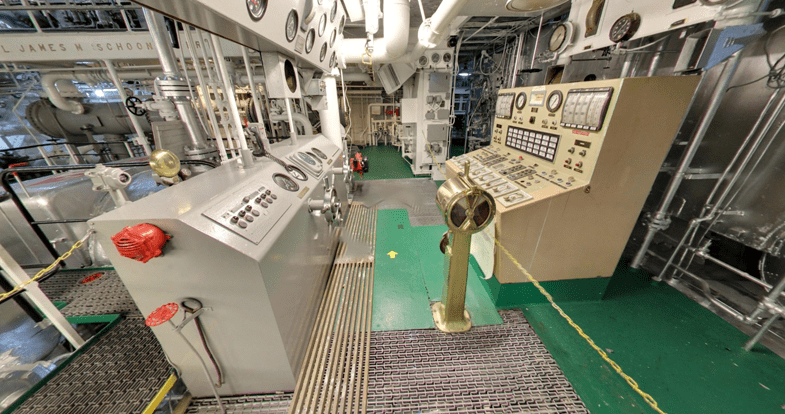 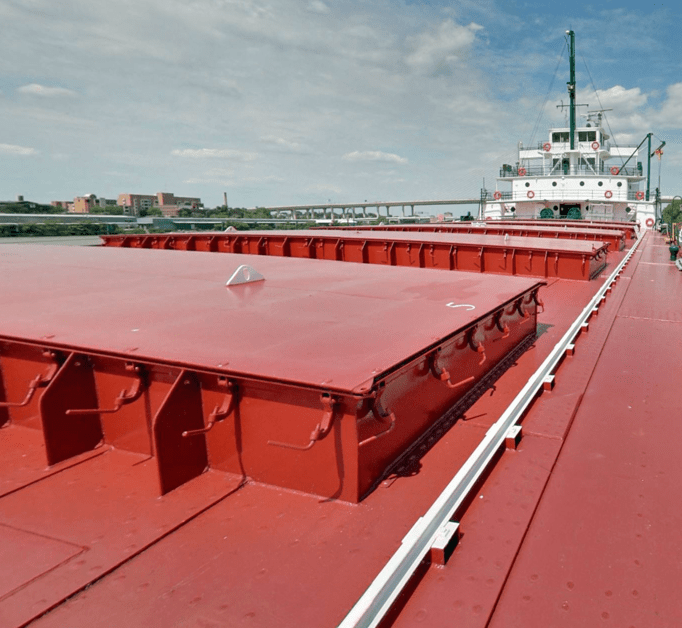 Much smaller, but with her own proud history of service, the Museum Tug Ohio was built by the Shipowner’s Dry Dock Company in Chicago in 1903. Christened the MFDS 15, she was designed as a firefighting tug and worked the Port of Milwaukee for almost 45 years, handling every type of maritime fire emergency imaginable. During one terrible fire in 1930 that threatened to destroy the entire Milwaukee waterfront, the 15 worked nonstop for hours, dashing through the flames repeatedly to pour water from her three pumps, which are capable of spraying 9,000 gallons of water per minute. Retired in 1948, the tug was purchased by the Great Lakes Towing Company, refitted, and re-christened the Laurence C. Turner. Before it was retired again in 2015, The Turner took on thousands of assignments, towing freighters and barges throughout the Great Lakes region. Donated to the National Museum of the Great Lakes, it has gone through a major restoration and is now named the Ohio. 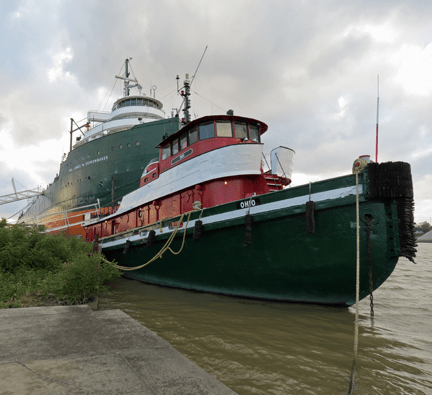 If you are a fan of ships and shipping, if you’re interested in Great Lakes history, or if you just want to spend a few hours learning about them, there’s no better place than the National Museum of the Great Lakes. Anytime you’re in the upper Midwest, it is worth a trip to Toledo to check it out.

Located at 1701 Front Street in Toledo, the museum is currently open Monday, and Wednesday through Saturday from 10 a.m. to 5 p.m., and Sunday from noon to 5 p.m. The museum is closed on New Year’s Day, Easter, Thanksgiving Day, Christmas Eve, Christmas Day, and New Year’s Eve, as well as during weather emergencies.

Admission to the museum is $11 for adults, and $10 for visitors over 65, as well as members of AAA and the military. Youth ages 6-17 are $8, and children age 5 and under are free. Additional fees apply during summer if visitors choose to tour the Colonel James M. Schoonmaker Museum Ship and the Museum Tug Ohio.

Parking is free at the museum, but the streets in the area are not suited for large RVs, so leave your rig at an area campground and drive your tow vehicle or dingy. For more information, call (419) 214-5000 or visit the museum’s website at https://nmgl.org/

Thought For The Day – Our middle child says we neglect him/her.

One Response to “National Museum of the Great Lakes”