Nick's Blog » My Brother From Another Mother

There are some people who come into our lives and stay a while before moving on, and over time they become no more than a faint memory. And there are others who make an impact that lasts forever. One of those people is a man named Gary Chandler.

Gary’s grandparents were good friends of my mom and dad and I don’t remember how old we were when we first met, somewhere back in the distant past, but there was an instant bond between us that neither time nor distance could ever erase.

Even as a kid, Gary was one of the most talented people I have ever known. He was an amazing artist, he taught himself to be a ventriloquist and got hold of one of those Charlie McCarthy dolls and delighted everyone putting on shows for us. I was, and still am, in awe of how much he could do.

Unfortunately, Gary’s home life was sometimes very difficult, and he often sought refuge with my family. That was fine with my parents, who loved him like he was their own child, and I know he loved them just as much. In fact, there was talk of them adopting him at one point, but for whatever reason, that never happened. Nevertheless, he was a part of our family and my brother from another mother.

As adults, after both serving our hitches in the Army, our lives took us down different paths – he stayed in the Midwest and I spent most of my working life out west. But anytime we got back in this area we tried to stop in for a visit. It had been several years since we were able to get together, so one of the main priorities for me this trip was to see Gary and his wife Karen. They live in Michigan, about an hour from Toledo, and yesterday we drove up to their place and spent the afternoon and evening with them.

We had a great time reminiscing about the good and sometimes not so good old days and catching up on what’s been happening in their lives and ours. Karen is an avid reader and belongs to several book clubs, where she always promotes my work. She had a bunch of my books she wanted autographed and I was happy to do so. I was flattered when Gary, who also loves to read, told me that he is an eclectic reader who enjoys everything from biographies to technical books, but almost never reads fiction, does read and enjoy my mysteries.

They took us for a drive around the area in what is called the Irish Hills and we loved the architecture of the old homes and commercial buildings in the small towns we passed through.

We had dinner at an Applebee’s in Adrian, where I took this picture of Gary and Karen, who celebrated their 49th anniversary just a few days ago. 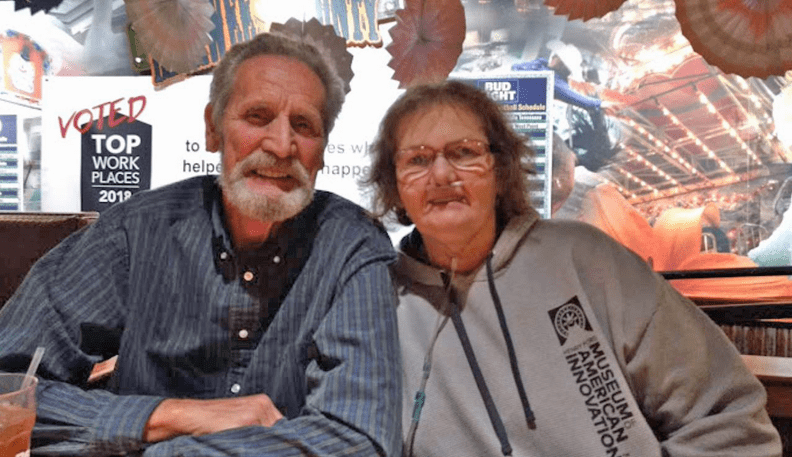 We talked about books and writing, and Gary said he doesn’t know how I can string words together the way I do and create characters he can relate to. In return, there is no way I could build the beautiful cabinets and bookshelves he did in their old farmhouse, or the impressive garage he built. I guess everybody is good at something, and fortunately the world seems to appreciate both wordsmiths and craftsmen.

Here is a picture of me and Gary that Terry took at the restaurant. He’s the tall, good looking fellow, in case you have trouble telling us apart. 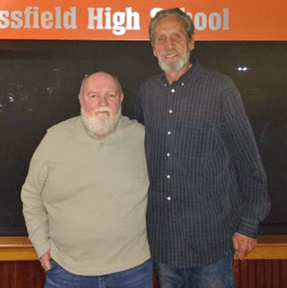 Thanks for making time for us, Gary and Karen. You have no idea how important you both are to me.

Our time in Toledo is up and today we will start heading south in search of warmer weather. It will be a rather slow and meandering trip, stopping here and there to collect blog fodder and looking into story ideas for future books. Hopefully we will have good internet access along the way so I can get blogs posted, but if I miss a day along the way, be patient. I’m like a bad rash, I may go away for a while, but I always come back.

Thought For The Day – You know you’re getting old when you wake up and it feels like the morning after, but there was no night before.

2 Responses to “My Brother From Another Mother”