The National Museum of the Marine Corps in Quantico, Virginia has many fine exhibits on the men and women who have served our country as Marines, but one monument honors a little-known Marine hero known as Sergeant Reckless. 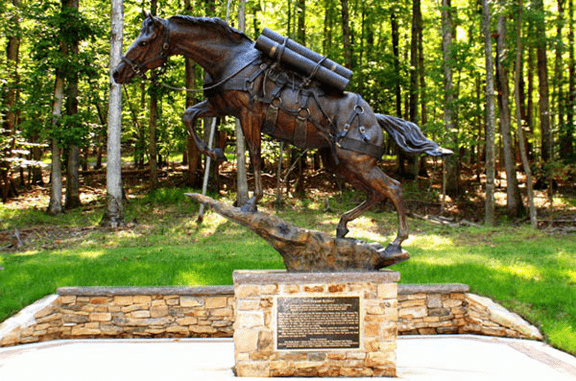 It was during the Korean War that Marine Lieutenant Eric Pedersen purchased the horse from a young Korean boy who needed the money to buy an artificial leg for his sister, who had lost her leg stepping on a land mine. Pederson paid $250 of his own money for the animal. It would prove to be a wise investment.

Pederson was an officer with the 75mm Recoilless Rifle Platoon of the 5th Marines and he put the horse to work carrying ammunition. The Marines quickly learned that this was no ordinary nag. She had a mind of her own, coupled with an incredible appetite.

Reckless would eat anything and everything. She loved scrambled eggs and pancakes in the morning, along with a cup of strong coffee. She also enjoyed sweets, including cake, Hershey bars, and Coca Cola. And if she felt she wasn’t getting the attention she deserved, she wasn’t above devouring the occasional blanket, hat, or some other piece of a Marine’s uniform.

Reckless proved herself as a true Marine during the brutal Battle of Outpost Vegas in March, 1953. The battle raged for five long, bloody days, and Reckless was in the middle of it, carrying load after load of ammunition the fighting men desperately needed up the steep 45-degree mountain trails to their position.

And not only did she do it, when the Marines could not spare anybody to guide her after her first few trips back to the supply point and then to the battle line, the brave little horse continued on alone! In just one day she made over fifty trips carrying needed supplies uphill and wounded Marines back down, 95% of the time by herself. At one point she used her body to shield a group of trapped Marines from enemy fire. Reckless was wounded twice, but she ignored her injuries and continued to do her job.

Over and over the amazing animal went back to be loaded and then took off for the front lines. By the time the battle was over she had carried over 9,000 pounds, almost five tons, of ammunition, walked over 35 miles through open rice paddies and up steep mountains, ignoring intense enemy fire falling all around her at the rate of 500 rounds per minute.

Reckless was promoted to Sergeant and brought back to the United States when the war ended. As author Robin Hutton told the Washington Post, “She wasn’t a horse; she was a Marine.” Sergeant Reckless was awarded two Purple Hearts for the wounds she received in battle, along with a Good Conduct Medal, Presidential Unit Citation, the National Defense Service Medal, Korean Service Medal, United Nations Service Medal, Navy Unit Commendation, and Republic of Korea Presidential Unit Citation. She spent her last days at Camp Pendleton, California, where she died in May, 1968. but her memory lives on with the men and women of the Marine Corps, and her statue in Quantico reminds us that heroes come in all shapes and sizes.

Be sure to enter our latest Free Drawing. This week’s prize is an audiobook of The Chocolate Labradoodle Caper, book three in Phyllis Entis’ Damien Dickens mystery series. To enter, click on this Free Drawing link or the tab at the top of this page and enter your name (first and last) in the comments section at the bottom of that page (not this one). Only one entry per person per drawing please, and you must enter with your real name. To prevent spam or multiple entries, the names of cartoon or movie characters are not allowed. The winner will be drawn Sunday evening. 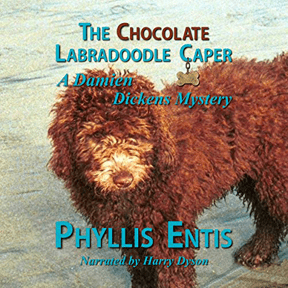 Thought For The Day – Before you decide an old man is an easy target, you’d better know what kind of young man he was.