On a visit to the friendly little town of Palatka, Florida, made a stop at Elsie Bell’s, a wonderful antique mall filled with all kinds of interesting goodies from the past. 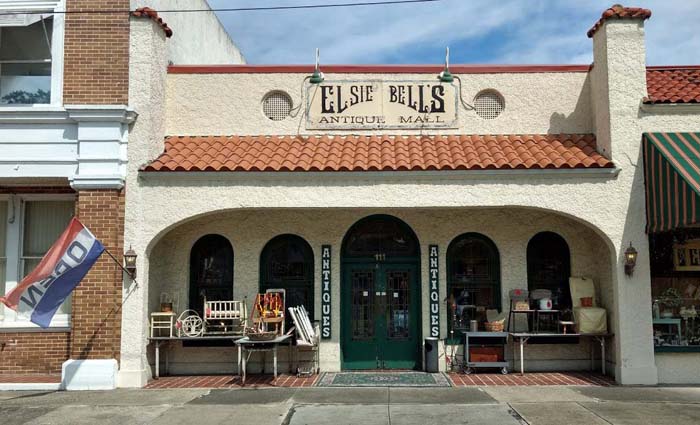 If you’re looking for glassware, vintage lamps, heirloom jewelry, antique furniture, or anything else from days gone by, you’re sure to find it at Elsie Bell’s. And guys, I promise you won’t be bored while your wife shops, either. The store has a “man cave” full of old tools, sporting goods, automotive memorabilia, and signs that will look good in your garage. But Elsie Bell’s has more than great things you can look at and touch. It also has a ghost! 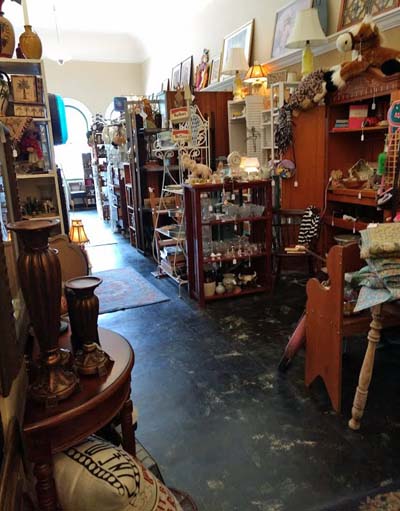 The 3,000 square foot Mediterranean Revival building started life as a funeral home in the early 1900s. And many believe that the ghost of the original proprietor, a gentleman named Edgar Johnson, never left the place, even if he did leave his worldly life. The interior features still reflect the building’s original purpose. The wide doorways were designed to make it easy to move coffins around inside the building. 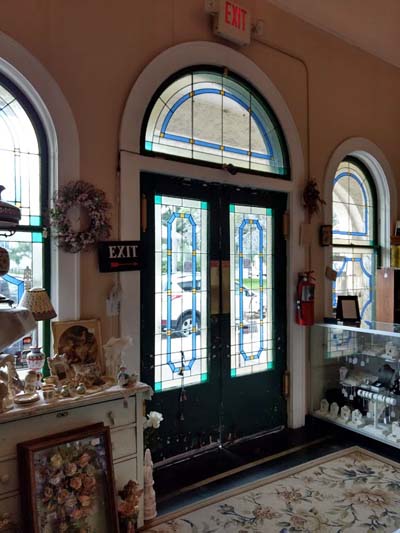 At the rear of the main room is an open archway. This is where the minister or funeral director would stand while giving a eulogy. This area is also where the casket would be displayed with the remains of the dearly departed. Off to the side is a small room that was originally reserved for the family members of the deceased so they could grieve in privacy. 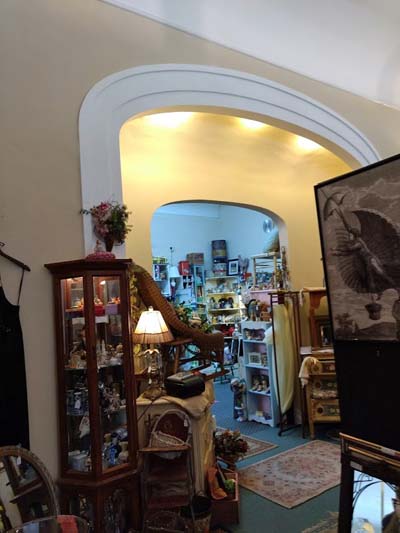 Through the arch is a back room that was once used to display different styles of coffins available for purchase. All of those rooms, along with a room that was the owner’s office at one time, are now filled with antiques. The old embalming room is now an office and not accessible to the public.

Shanti Hall, a very pretty and friendly young woman, greeted us when we entered the store and spent some time telling us about its history. 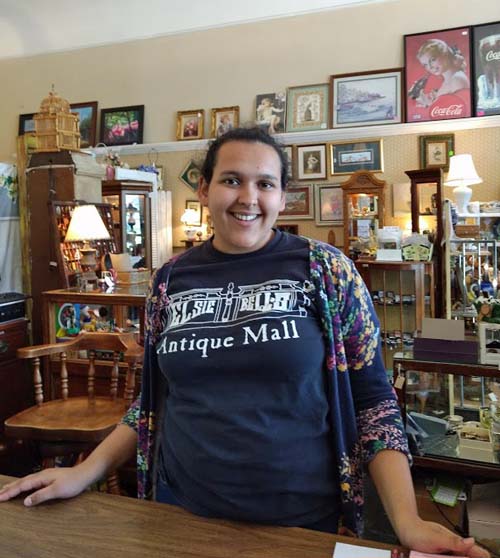 She was quite candid about the haunting, saying that more than one person has seen the ghost of Edgar Johnson. Most report seeing a shadowy figure standing quietly off to the side in one of the vendor booths, or near the cash register at closing time. He is said to be wearing an old fashioned black mourning suit with a white handkerchief in his pocket.

In one sighting, a dealer who rents a vendor booth in the store came in early one morning and went to the back room to unload some items and bring them in to her booth. She quickly ran back to the front of the store saying that she had seen a man in the back room. The clerk told her that was impossible because she had just unlocked the door and they were the only people in the store. But the vendor insisted she had seen somebody. There were some old photographs available, and when the frightened vendor saw them she pointed at a gentleman and insisted he was the man she had seen. That man was the twin brother of Edgar Johnson, who is still very much alive but nowhere near the store at that time.

It doesn’t seem like Edgar purposely wants to scare anybody.  While alive, he was known for his sense of humor, and also for being a ladies’ man. It’s not uncommon to find things moved around in the store, and Edgar seems to want to show off when pretty women are browsing the aisles.

If he had one shortcoming, it was that he was almost compulsively neat. More than one report says he seems to get agitated when things are not up to his standards of perfection.

When I asked Shanti if she’s seen Edgar or experienced any of his pranks, she said that more than once when she has been alone in the store, something would fall off of a shelf or display case and be broken, even though nobody was near it. She also said she’s grown used to setting something down on a counter and turning her head for a moment and finding it missing when she turns back to it, or of knowing that an item was one place when she locked the store at the end of the day and finding it somewhere else when they reopen in the morning. Doors that employees know were closed when they left the store for the night will be open or ajar in the morning, or the vacuum cleaner may be running, or merchandise moved about. There was also a book of ghost stories that was missing from its shelf and found on the floor every morning until it was sold.

Several groups of paranormal researchers have spent the night in Elsie Bell’s former embalming room, and the store has been featured on the television show Local Haunts, as well as on Jacksonville’s First Coast News.

So, do you believe in ghosts? Whether you do or not, the next time you’re in Palatka, stop at Elsie Bell’s Antique Mall, located at 111 N. 4th Street, across from the Putnam County Courthouse. If you go, tell our friend Shanti we said hello. And if you do happen to run into Edgar Johnson while you’re there, give him our regards, too.

Be sure to enter our latest Free Drawing. This week’s prize is an audiobook of Stillborn Armadillos, the first book in my John Lee Quarrels series. To enter, click on this Free Drawing link or the tab at the top of this page and enter your name (first and last) in the comments section at the bottom of that page (not this one). Only one entry per person per drawing please, and you must enter with your real name. To prevent spam or multiple entries, the names of cartoon or movie characters are not allowed. The winner will be drawn Sunday evening.

Thought For The Day – Monsters are real, and ghosts are real too. They live inside us, and sometimes, they win. – Stephen King