Besides the flag, no one item symbolizes American freedom more than the Liberty Bell. Pictured on postage stamps, coins, and posters, this icon represents all that is good about our country. But there are things you may not know about the Liberty Bell.

Hung in the State House in Philadelphia in 1753, the bell was first known as the State House Bell. It summoned the Philadelphia Assembly to debate the Stamp Act and other unfair actions by the British Parliament. Some stories claim the bell cracked when it was rung to celebrate the signing of the Declaration of Independence, but no one knows exactly when the famous crack we see today first developed. However, it was sometime between 1817 and 1846, long after the American Revolution.

The 2,000-pound bell was surprisingly fragile, and like other bells cast in the same time period, it came with inherent flaws. Its unstable mix of metals made it very brittle. The bell first cracked soon after arriving in Philadelphia in 1752. Twice the Pennsylvania Assembly hired local craftsmen to recast it. When the bell cracked again in the first half of the 19th century after years of service, workers fixed it by drilling the hairline fracture to widen the crack, an accepted remedy. The repair lasted only a short time, and when the crack extended in 1846, the City of Philadelphia retired the State House Bell from active use. 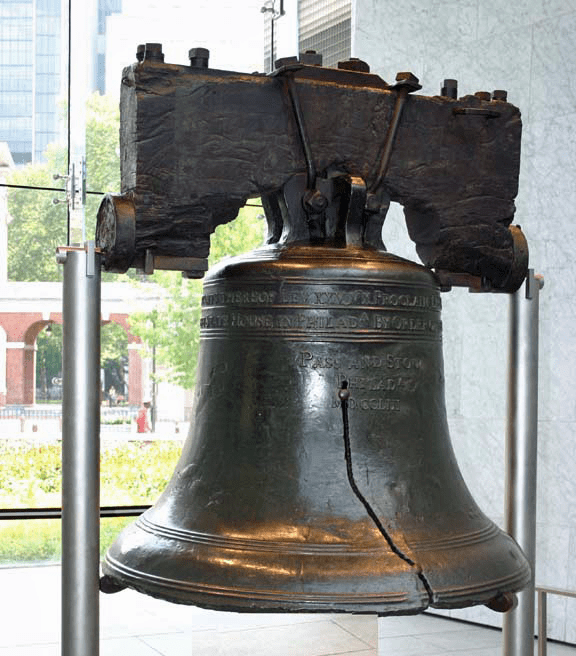 Philadelphia, the nation’s capital from 1790 to 1800, had long been home to a vital free African American population. The anti-slavery movement found a home in Philadelphia, especially among the Quakers, who sheltered runaway slaves. Two of George Washington’s slaves fled and found shelter among the local African American population. In the 1830s, as the anti-slavery movement grew, abolitionists adopted the old State House Bell and gave it a new name; the Liberty Bell.

With the end of the Civil War and Reconstruction period, black Americans found that the freedoms President Abraham Lincoln promised them were still denied in many ways. For them, the bell became a symbol not of liberty, but of promises broken and freedom denied.

In the years following the Civil War, the bell toured the country, drawing huge crowds who saw it almost as a religious icon. People not only wanted to see it, they wanted to touch it, kiss it, and even sit on it! While the bell traveled the nation as a symbol of liberty, race riots, lynchings, and the Indian wars painted a very different picture for minorities.

Two national movements representing large segments of the American population; women’s suffrage and civil rights, invoked the Liberty Bell in their struggle for equality. Susan B. Anthony, an early leader of the women’s movement, used Independence Hall and the Liberty Bell as a backdrop when she spoke out for women’s rights to a cheering crowd on the 100th anniversary of American independence on July 4, 1876.

Continuing the struggle for the right to vote, one group of women, the Pennsylvania Women’s Suffrage Association, commissioned a copy of the Liberty Bell in 1915, calling it the Women’s Liberty Bell. This bell visited every county in the state and helped to win passage of the 19th Amendment to the Constitution in 1920, giving women the right to vote.

Recognizing the Liberty Bell’s symbolic power, 20th century civil rights activists used the bell to highlight the ongoing struggle for equality and liberty for all. In 1965 the bell was the scene of civil rights demonstrations intended as a reminder that its ideals should apply to all Americans. Today the annual Let Freedom Ring Ceremony celebrating Martin Luther King Jr. Day begins at the Liberty Bell.

The crack may prevent the Liberty Bell from being rung, but its sweet song of freedom for all has inspired Americans of every race and creed for over 250 years.

Thought For The Day – In order to live in a tolerant society, we must be intolerant of intolerance.