Do you believe in ghosts? Do you think it is possible for the spirits of those who have died to linger on the earth, sometimes making their presence known to us? If so, there are plenty of opportunities to experience a paranormal encounter in and around Gettysburg, Pennsylvania.

The small town of Gettysburg was the scene of three days of ferocious and bloody fighting in July of 1863, when Confederate troops under General Robert E. Lee clashed with the Union Army commanded by General George G. Meade. By the time the smoke cleared, some 51,000 soldiers from both sides lay dead and dying in the fields around Gettysburg, and in the town itself. There are those who believe that the ghosts of many of those soldiers have never left Gettysburg.

An entire small industry has cropped up in Gettysburg, with ghost tours being offered on almost every street corner. I suspect that the majority of the “ghostly encounters” experienced on these excursions are the results only of a vivid imagination and the canned spiel of the tour guide.

Still, even though there are those who capitalize on the paranormal, that doesn’t mean that there might not be things we cannot explain. And if ghosts do exist, what better place than Gettysburg for them to be found? There are few places in this country that saw so much tragic loss of life in such a short period of time.

There are dozens of ghost stories about Gettysburg, but no place there is said to be more haunted than Sachs Covered Bridge. 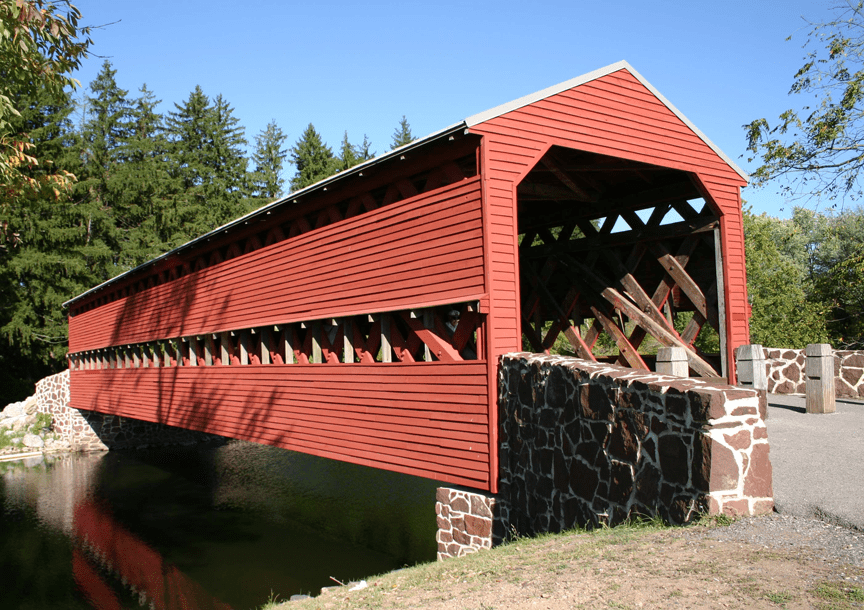 Built in 1852, both the Union and Confederate armies crossed the 100 foot long bridge in the days leading up to the battle, and part of General Lee’s army fled across the bridge as they retreated after the battle. During the fighting, a field hospital was established in a field next to the bridge.

To add to the story, three men, either spies or Confederate deserters, were hung from the bridge’s rafters.

There are many stories of unexplained things happening at Sachs Bridge; tales of ghostly orbs or mists, lights moving about after dark, and many visitors have reported a feeling of overwhelming sadness, or even of anger, hanging over the bridge. Others have reported feeling a sudden waft of cold air, even on the hottest summer days.

Some have claimed to have heard cannons and gunfire near the bridge, as well as sudden screams, and the sounds of footsteps and running horses when nobody was there. Many believe that the angry spirits of the hanged men are still there, and do not want anybody disturbing them.

Never ones to pass up an adventure, on a visit to Gettysburg, we drove out to Sachs Bridge after dark one night and parked for a while. It was a quiet night, and we were the only living people there. If there were any spirits hanging around, they didn’t make themselves known to us. It actually felt pretty peaceful and serene as a big autumn moon rose over the wheat fields surrounding the bridge. There may have been a certain melancholy, but maybe that’s just because we were aware of all of the suffering that took place there.

When we returned the next day, it was not nearly as quiet, but not because of any ghosts. Sachs Bridge has become a popular tourist attraction, and there were people all over, taking photographs, talking loudly, and kids were running around. But the spirits who are supposed to haunt the bridge were not showing themselves. I can’t blame them, if I were a ghost, I wouldn’t want to have that much company every day.

So, is Sachs Bridge haunted? I’ve read a lot of stories of paranormal events there, and I don’t think they all could have been made up. I have also seen a lot of photographs taken at the bridge that show things I can’t explain. Could they be aberrations of light and shadow? Possibly. But then again, who’s to say they weren’t evidence of something unexplained?

Congratulations Evie Robinette, winner of our drawing for an audiobook of Stillborn Armadillos. We had 57 entries this time around. Stay tuned, a new contest starts soon!

Thought For The Day – It’s easier to dismiss ghosts in the daylight. – Patricia Briggs

One Response to “Ghosts Of Sachs Bridge”