In a blog post a couple of days ago titled Building Stuff, I showed the cable and lock I had put together to secure our Honda generators when we have to use them outside during a power outage. At the time, I had the loops on each end of the cable secured with clamps and nuts, because our local hardware store did not have any of the proper size cable ferrules in stock. 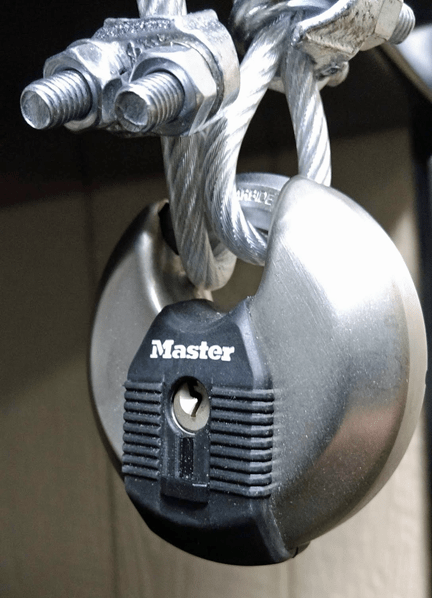 For those of you who don’t know what a cable ferrule is, it is a connector used to secure two pieces of cable together, or in my case, to make a loop in a cable and secure it. Here is a picture of one. 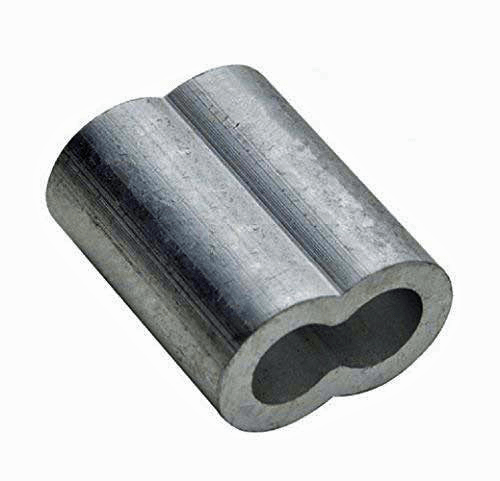 After reading the blog post, a number of people commented that anybody with a wrench could come along and loosen the nuts on the clamps I was using and walk away with the generators. I knew that was true, and I didn’t intend to keep things that way. But with Hurricane Dorian looming when I bought everything, I needed anything that would work temporarily.

The gentleman at the store told me that they would have the ferrules in early this week. And sure enough, when I went by yesterday, they had them.

So Terry and I took the cable clamps apart, ran the ends of the cable through a ferrule, looped them and went back out the other side, then I used a handheld sledgehammer to flatten them out. Strong tugging showed that nobody was going to be able to pull those cables back out again. 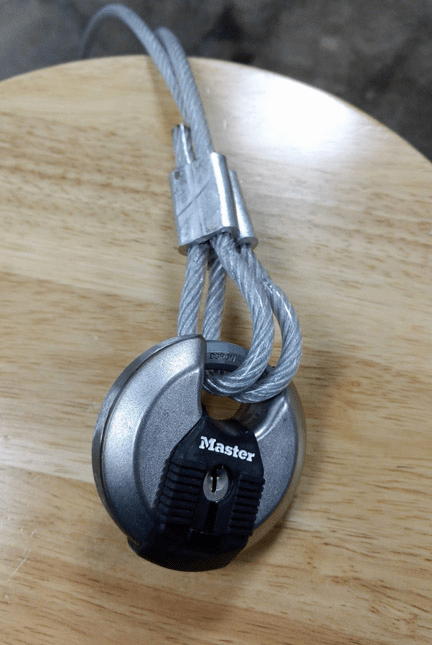 As I said in the original blog post, when we need to use the generators outside, I will run the cable through their handles and through one of the wheel spokes of my F-150 pickup and lock them down. As I also said in that blog post, somebody could still come along with a cable cutter and make away with generators. If someone wants something bad enough, they’ll find a way to steal it. But at least this will slow them down and make it harder for them to do so.

During a prolonged power outage I will shut the generators down and bring them inside at night. If you keep the doors closed, a modern refrigerator will preserve the food inside for many hours, even if it’s not running. We had residential refrigerators in our MCI bus conversion and in our Winnebago Ultimate Advantage motorhome, and in both rigs we routinely drove as much as eight hours in a day with the refrigerators turned off before we installed pure sine wave inverters. So that’s not really going to be a big issue.

In other news, this morning I finally have an appointment with a pair of specialists to see if they can figure out the reason for the sharp pains I have been getting in my right temple, the almost nonstop headache, and blurred vision and dizzying episode I had several weeks ago. Hopefully they can get to the bottom of all of it.

And then, even though I said I didn’t want to go anywhere near the big city again anytime soon, if we get done with the doctors in time, we’re going to run down to Relax The Back in Orlando again. They are a company which specializes in furniture for people with back problems. My doctor recommended I check them out for an office chair that would hopefully ease some of my ongoing back pain. When we stopped in there on Saturday I was very impressed with the Lifeform Ultimate Executive Chair. I have owned more office chairs and executive chairs than I could count during my years in the newspaper business and as a writer living on the road, and now in my home office, and it was absolutely the most comfortable chair I have ever sat in.

And while the chair I tried out there was amazingly comfortable, you don’t buy these off the floor. They are a special order item and each chair is custom built for the individual who will be using it, taking into consideration their height, weight, and what they will be doing with it.

However, spending upwards of $2,000 or even more for an office chair seemed like quite an extravagance to me. Miss Terry and some other friends told me to go for it and reminded me that I had no problem spending money on a Mustang I seldom drive, or buying expensive hearing aids and other things for other people who need them. Actually, I agonized over the Mustang purchase, even though I wanted it badly. As for doing things for other people, that is something I really enjoy. But come on, somewhere around $2,500 total for an office chair? To me that’s quite extravagant.

Since then it was pointed out to me by my wife and other people that it’s a business expense that I can write off, which helped in the decision-making process. And when one of my relatives asked me how much my powered La-Z-Boy recliner cost and I said somewhere around $1700, he asked how many hours a day I spent in the recliner. I told him usually about three, sometimes four hours in evening while watching TV. He then asked how many hours a day I spend working at my desk and I said anywhere from 8 to 10 hours. That’s when he replied, “Gee, you’re supposed to be the smart one in the family. Do the math, dummy!”

Okay, I guess that makes sense. We will make a run back down to Orlando and see what we can work out

8 Responses to “Making It Harder”