I’m a small town boy at heart, and though I have been to just about every major city in the United States and a few in other countries, big cities just don’t do a thing for me. So I avoid them whenever I can. But yesterday we took a trip down to Orlando, and I have to say, I don’t know how the people who live there do it. It’s just so darn busy! Traffic is crazy, nobody seems to know what a turn signal is for, and red lights and stop signs are merely suggestions.

The reason for our trip to the big city was twofold. There was a police badge collectors show at the Rosen Plaza Hotel on International Drive, in the heart of the tourist area. We got to international Drive all right, but my GPS and I were not communicating very well and there was a bit of confusion before I finally found where we needed to be. I was put off when I saw a sign that said self-parking was $15, but as it turned out, the fee was waived for those attending the show.

There were about 90 vendor tables, and we saw some beautiful badges and met some nice people, but nothing screamed “take me home!” Badge collecting is one of those things you probably shouldn’t do unless you have an unlimited income, because it’s not uncommon at all to see badges going for $300 to $400, although there were quite a few in the $125 to $200 range. Somebody should have probably told me this before I began collecting badges.

There are all kinds of things to do along International Drive, from any kind of restaurant you could ever want, to Ripley’s Believe It or Not, and shops selling everything from expensive jewelry to cheap trinkets.

Like everywhere in Orlando, traffic is horrendous. But if you’d like to get away from all the noise on the street and have a birds eye view of the area, you could always take a ride on the Orlando Eye, a massive Ferris wheel that the operators call an “observation wheel.” It stands an impressive 400 feet over Orlando, with 30 air-conditioned capsules that can each hold up to 15 passengers. If the views were not enough, the capsules include lighting and audio effects as well as interactive tablets which are all designed to enhance the passenger experience. 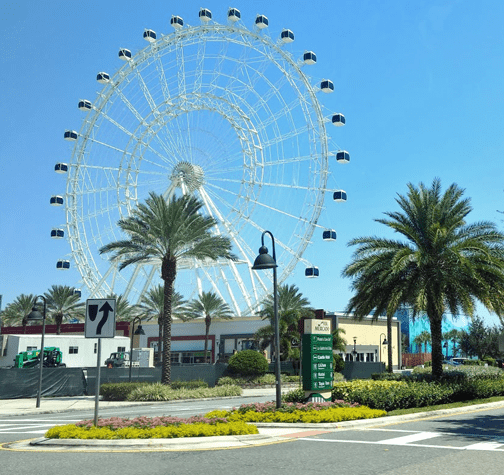 According to its official website, the wheel uses a stabilizer system with a suspended ski-lift capsule design for a smooth ride without the rocking or swinging that you may have experienced with normal Ferris wheels. Between the smooth ride and the awesome views, it’s a ride you will never forget.

When it was opened, the wheel was the tallest attraction in Orlando. But there’s always somebody who has to build something even bigger, and this is the Orlando StarFlyer, billed as “the world’s tallest swing ride,” at 450 feet. Guests ride in a double seat next to whomever you want to panic and scream like a litle girl with, and are secured in their seats with seat belts and a leg harness that can only be unlocked by the ride operator. Moving up and down and rotating around the giant tower at speeds of up to 45 mph, they say no other attraction combines safety and thrills like the Starflyer. 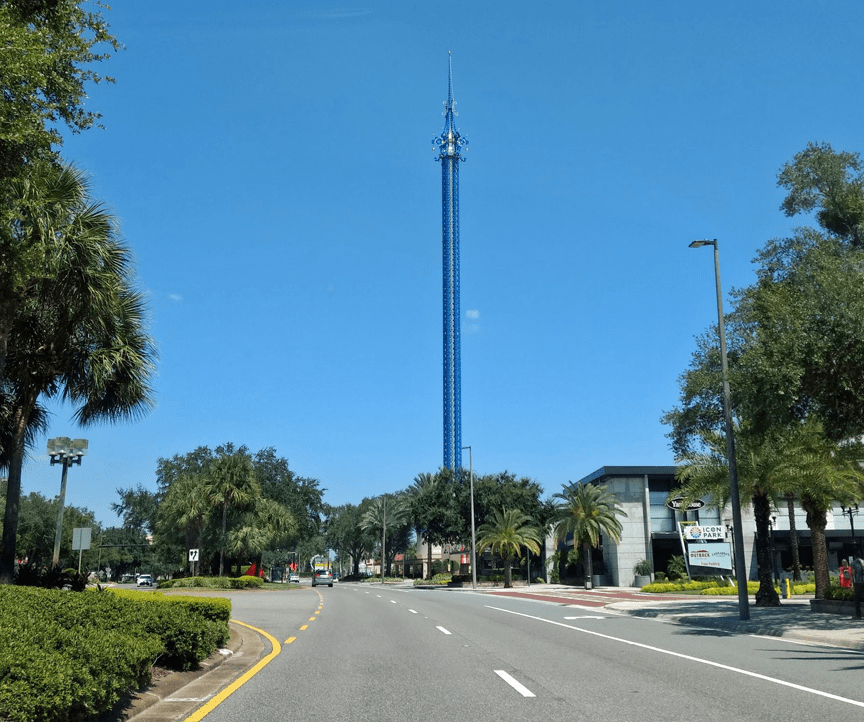 No, thank you, I’ll pass on either one. Though I used to jump out of perfectly good airplanes when I was a foolish young man, as a foolish old man I prefer to keep my little fat Flintstone feet planted on terra firma.

The other reason for our trip to Orlando was to check out a place my pain doctor recommended called Relax The Back, which specializes in furniture for people with back problems. Everything from beds and recliners to massage chairs. If you need it, they’ve got it. I was looking for an office chair and was very impressed with the Lifeform Ultimate Executive Chair. This is a whole world away from anything you’ll find at an office supply store or a big box store. Then again you could buy a dozen run-of-the-mill office chairs for what it costs, too! There’s no question that it was comfortable, but I’m not sure I can justify spending a couple of grand on a chair.

When we left Relax The Back we checked out a couple of antique shops, and Terry found some little stuff that she was interested in. By then it was about three in the afternoon, and though we had talked about finding some more antique shops, we were both so frazzled by the traffic and the hustle bustle of the big city that we just wanted to get the hell out of there.

My GPS kept wanting to put us back on Interstate 4, which is one never ending construction zone, so we went old school and used a road map to find state Route 50, which runs across the state, and took it east to Titusville, and then US 1 home. By the time we finally put Orlando behind us, Terry and I agreed that we are in no hurry to go back there again if we can help it. We just like the slower pace of a small town.

Today is your last chance to enter our Free Drawing for an autographed copy of Big Lake, my first novel and the book that made me a New York Times bestselling author. This particular book is a bit special, because it’s the last one I have with the original cover, before I commissioned Elizabeth Mackey to redo my earlier covers and make all future ones. To enter, click on this Free Drawing link or the tab at the top of this page and enter your name (first and last) in the comments section at the bottom of that page (not this one). Only one entry per person per drawing please, and you must enter with your real name. To prevent spam or multiple entries, the names of cartoon or movie characters are not allowed. The winner will be drawn Sunday evening. 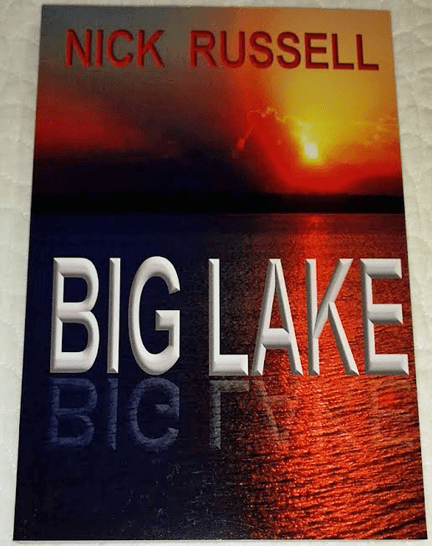 Thought For The Day – I got old too soon and wise too late.