Nick's Blog » Monument To A Man Who Never Lived

The small southern Alabama town of Andalusia is a friendly place where southern charm and hospitality reign supreme. It’s the kind of place where everybody knows their neighbors, where people say hello when they pass you on the street, and where you can always satisfy your hunger for boiled peanuts, grits, or fried catfish. And don’t forget the sweet tea!

The handsome Covington County Courthouse downtown, which was built from 1914 -1916, is listed on the National Register of Historic Places. 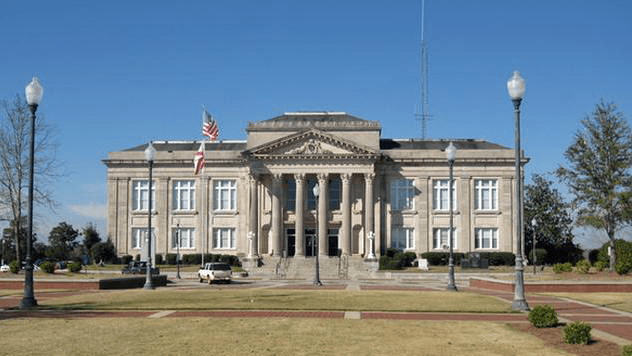 While the courthouse itself is a good photo op, a small monument on the courthouse lawn has become a tourist attraction for those with a literary bent. Shaped somewhat like a headstone, the tablet bears the inscription “In memory of PHILIP NOLAN, Lieutenant in the Army of the United States. He loved his country as no other man has loved her; but no man deserved less at her hands.” 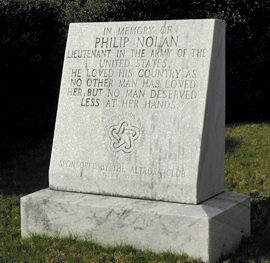 Who was Philip Nolan, this Army veteran who loved his country, and what does his strange epitaph mean? They say truth is sometimes stranger than fiction, and it’s true in this case because Philip Nolan never lived.

He was the main character in the short story The Man Without a Country by Philip Nolanthat was first published in The Atlantic Monthly magazine in December, 1863, and was required reading in many high school classes for generations.

In Hale’s story, Philip Nolan is a brash young Army officer who finds himself on trial for treason simply because of his friendship with Aaron Burr (who in real life was tried for treason in 1807 and acquitted). In the story, Philip Nolan does not fare as well. At one point the impetuous young man angrily shouts, “I wish I may never hear of the United States again!”

This shocked the entire courtroom, and Nolan was quickly found guilty and convicted. Angered by his treasonous outburst, the judge sentenced him to exactly what he had wished for. Philip Nolan would spend the rest of his life as a prisoner at sea on warships, never allowed to set foot on his homeland again and never allowed to hear the name of his country again, or any news of what was happening in the United States.

At first Nolan doesn’t care, but as the long years go on, he comes to realize how much he really does love and miss his country. He begs for any snippet of news, but the sailors and officers on the ships he is held on are strictly forbidden from saying a word about what was happening at home.

Denied access to his homeland, Nolan created a shrine to the United States in his cabin on the USS Levant. It included a flag draped around a picture of George Washington, and a bald eagle painted over the head of the bed. Shortly before his death, Nolan tells a visitor, “Here, you see, I have a country!”

After more than half a century at sea, Nolan dies aboard the USS Levant and is buried at sea. He wrote his own epitaph, the same words that are inscribed on the memorial at the courthouse in Andalusia, which was placed there on July 4, 1975. It’s one of those little bits of history awaiting travelers who get off the interstate highways and explore America’s two-lane roads. Check it out the next time you’re in the area.

Thought For The Day – Getting old sucks. Yesterday I threw my back out when the microwave beeped and startled me.

2 Responses to “Monument To A Man Who Never Lived”