Nick's Blog » Can You Say Frustrated?

I said in yesterday’s blog that I had an appointment with a specialist yesterday afternoon. This was to see if we can figure out what is causing the sharp stabbing pain I get in my right temple, and to further investigate what caused my episode of dizziness and blurred vision in my right eye several weeks ago.

The specialist got the referral from my pain doctor within two or three days of that episode, but never called me to set up an appointment. Finally, after a week, I called them and they said they had received the referral but had forgotten to call. That should have been my first warning sign of trouble ahead.

We set up an appointment at that time, which was scheduled for 2:30 yesterday afternoon. At that time, it was also arranged for me to have an MRI of my head. But at 8:15 yesterday morning, his office called to tell me that the appointment had been canceled because he doesn’t treat patients with my condition. I asked the woman on the phone how he knew what my condition was, since I don’t and the doctor had not seen me yet. Her only response was to repeat what she had already told me, he doesn’t treat patients with my condition. I asked if she had any clue what my condition was, and she repeated the same thing a third time.

Yeah, that’s frustrating. Why did they wait weeks with no word, and then call me less than six hours before the appointment to tell me they don’t, or can’t, or won’t see me? I asked the woman what kind of doctor I should be seeing, but she hung up without answering my question.

So, I guess when I go back to my pain doctor this coming Monday, I’ll ask him if he has any other suggestions for a referral. And hopefully the next one will at least be professional enough to be able to handle my needs, or else tell me ahead of time instead of waiting until the last minute.

With an unexpected day at home, I spent the time writing and got another 2,000 words done in my new John Lee Quarrels book. And since I was so frustrated with the doctor nonsense, I took it out on one of my characters and killed him. Hey, I get my vindication any way I can!

Today will be another stay at home and write day, and Thursday and Friday both, Terry has doctor appointments of her own. You know what they say, this getting old stuff isn’t for sissies!

And in closing, since I feel like a grumpy old man today, here’s a chuckle to start your day from the collection of funny signs we see in our travels and that our readers share with us. 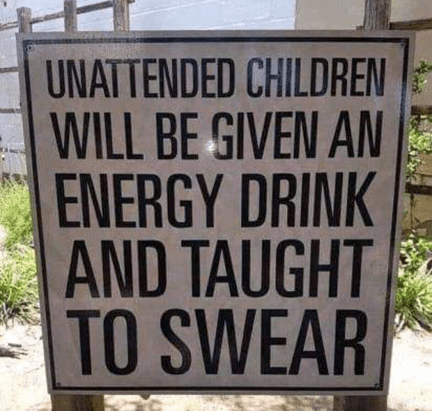 Thought For The Day – The most important thing in life is not knowing everything, it’s having the phone number of somebody who does!

9 Responses to “Can You Say Frustrated?”