Nick's Blog » Back To Square One

In a blog post a couple of days ago I said that we were planning a trip up to Ohio to do some research on the family saga series I want to write. At the same time, I said my back was acting up again, so the timing of the trip depended on that. As it turns out, we are still at home.

The pain was back on Thursday and growing in intensity, and by Friday morning I could hardly function, even taking oxycodone and wearing my back brace. And I’m back to using a cane to get around. So basically, I’m back to square one, where I was eighteen months ago. This is really getting old.

In the past I’ve been told I’m not a candidate for back surgery, but that’s because basically all the VA ever wants to do is fuse something, which would not help me. But Dr. Kent tells me there are some new techniques that are proving to be successful in cases like mine. When I talked to him yesterday he was trying to get me set up for another MRI of my lower back as well as a consult with a neurosurgeon who specializes in things like this. He said the neurosurgeon is not one who wants to operate just for the sake of performing surgery and will only do so if he believes he can help the patient. We are in a holding pattern right now, waiting to see what happens.

The good news is that the MRI I had of my brain last week doesn’t show any sign of a stroke or TMI. One less thing to worry about.

Meanwhile, I’m trying to focus on writing to take my mind off of everything else. But the drugs leave me in a fog that I don’t like, and I told Miss Terry that I have no idea what will come out the other end when it’s time to proof what I’m doing.

In other news, I received an email yesterday from a longtime blog reader who just hung up the keys after fourteen years of fulltiming. He said it was a choice that they did not want to make, but that family health issues required it so they could care for his elderly in-laws. He asked me how long it takes to get used to using a regular toilet and not trying to flush with his foot after he goes to the bathroom. I replied that we’ve been off the road almost three years now, and I still find myself doing that now and then. Old habits die hard, I guess.

And in closing, here’s a chuckle to start your day from the collection of funny signs we see in our travels and that our readers share with us. I’m not sure what the message is here. Are the lap dances gluten-free? Or are gluten-free couples welcome? Inquiring minds want to know. 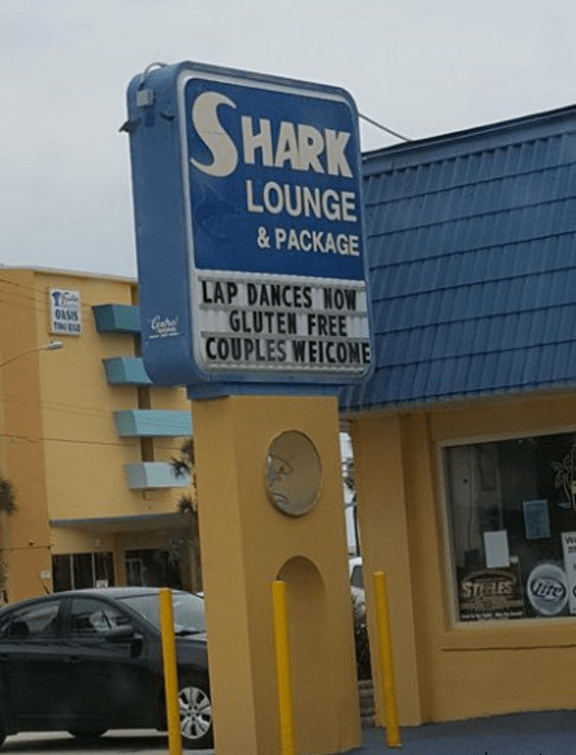 Thought For The Day – Facebook is a lot like jail; you sit around and waste time, have a profile picture, write on walls, and get poked by guys you don’t really know.

5 Responses to “Back To Square One”