Note: This story if from my book Highway History And Back Road Mystery II.

Just outside of Mount Airy, North Carolina, we discovered the final resting place of two of history’s most famous medical oddities, Eng and Chang Bunker, known to most people as the Siamese Twins. 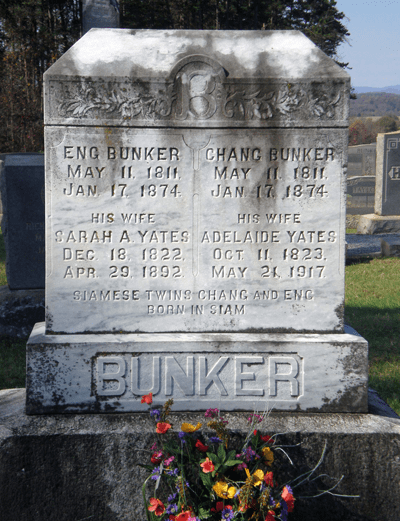 Born near what is now Bangkok, Thailand (then known as Siam) on May 11, 1811, their names mean “right” and “left.” At birth the arm-like ligament of flesh that connected their lower chests held them face to face, but as they grew up, the band stretched to allow them to stand side by side. 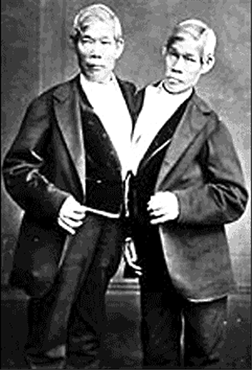 The birth of the twins caused a lot of debate in their small village, where some thought they were an omen that the end of the world was approaching, and others wanted to kill the infants, out of fear.

The twins were the sons of a poor Chinese fisherman, and when he died their mother was left with no way to support them. So when a Scottish merchant named Robert Hunter spotted them swimming in a river and offered to bring them to America for a better life, their mother agreed and accepted a small payment, in effect “selling” them to Hunter and his friend, an American sea captain named Able Coffin.

For several years the twins toured Europe as stage attractions, drawing large crowds wherever they were put on display. Showman P.T. Barnum then agreed to promote them in America.

As the story goes, when they were waiting in line to apply for American citizenship, a Naturalization officer demanded that they tell him their family name. A man in line behind them named Fred Bunker offered his name, which they repeated to the bureaucrat.

In 1839, the twins were touring in Wilkes County, North Carolina, and while the guests of a local doctor, they met sisters Sarah Ann and Adelaide Yates. Taken with the sisters, the twins returned several times to visit them, and proposed marriage. When the local townspeople first heard of their engagements, they objected, and even made death threats against the twins. Fearing for their lives, the brothers arranged for a surgery to separate them, even if it meant killing them both. When their fiancées learned of their plans the sisters intervened just before the operation and convinced them not to go through with it.

In 1843, Eng married Sarah and Chang married Adelaide in a double wedding ceremony. The unions would produce eleven children for Eng and Sarah, and ten for Chang and Adelaide.

Their unusual circumstances called for an unusual lifestyle. In 1854, they purchased a 1,000 acre plantation along Stewarts Creek in Surry County, near Mount Airy and built two houses, located a mile apart. They alternated their stays with each wife and children every three days. The plantation was successful and had many slaves, and the twins enjoyed a comfortable lifestyle. Each family had a son who fought for the Confederacy during the Civil War. By the end of the war they had lost a large portion of their property and were resentful toward the United States government for the rest of their lives for it. By all accounts, the twins were popular and well respected members of the community.

Some reports say that the twins’ relationship was not always harmonious. Chang was reported to be a heavy drinker who often became querulous, while Eng was the more pious of the two and a devout churchgoer.

Over the years, several doctors had discussed the possibilities of a surgical operation to separate the twins, but they were afraid they might not survive the procedure and declined. On January 17, 1874, while they were at Chang’s house, he died after a bout with pneumonia that had lingered for months. Eng, who was not sick, became panicked and died a few hours afterward. Physicians said the cause of his death was “terror” and that he might have survived very well if he had allowed himself to be separated from his brother’s body. An autopsy revealed that they shared their liver and bloodstream. The twins’ fused liver is on display at the Mutter Museum in Philadelphia, Pennsylvania, along with plaster death masks of the twins.

Eng and Chang had donated the land for the White Plans Baptist Church, which they helped build, and where they attended services. They are buried in the cemetery at the church. 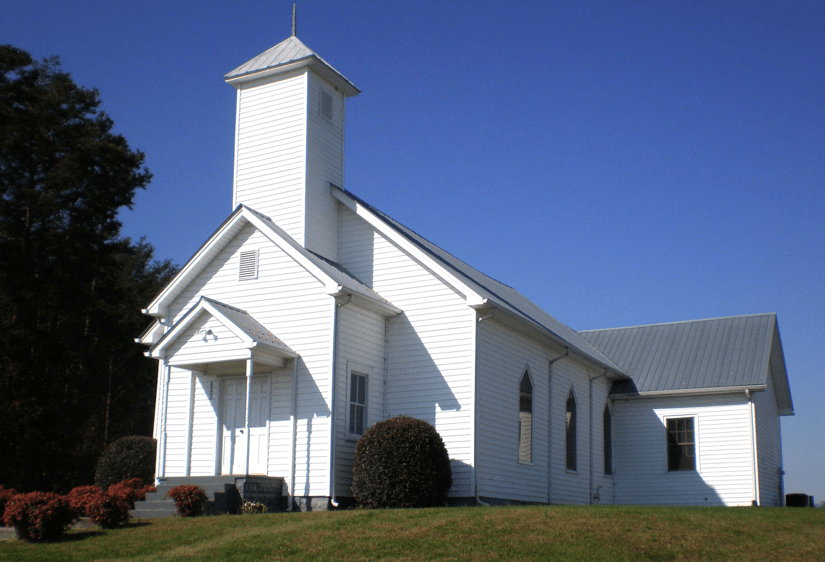 A portion of their original farm is still owned by their descendants, including Mayberry Campground, located at 114 Bunker Road in Mount Airy. The campground makes a good base for exploring all that the region has to offer.

Thought For The Day – If time is money, is an ATM a time machine?